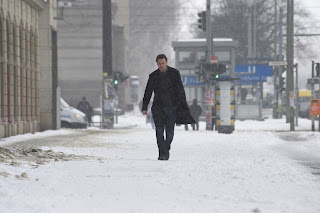 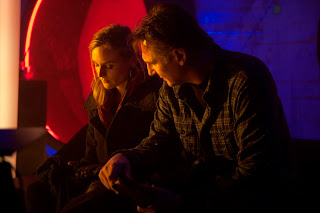 UNKNOWN                          C+
USA  Great Britain  Germany  France  Canada  Japan  (113 mi)  2011  ‘Scope  d:  Jaume Collet-Serra
The film opens with a rush of energy that surprisingly gets you into the thick of the action right away, where Liam Neeson gets separated from his wife at a posh Berlin hotel once he realizes he left an important briefcase behind at the airport, heading back in a taxi without even letting her know.  Out of cell phone range and in a traffic jam, an impatient Neeson urges the driver to take alternative methods, sending a jolt of energy through the audience when the taxi spins out of control and heads over a bridge into the icy waters of the River Spree, where the driver (Diane Kruger) ingeniously manages to free herself and rescue her unconscious passenger before disappearing anonymously into the crowded city streets.  4 days later, Neeson awakes from a coma in a hospital, still forgetful of details but desperately needing to find his wife (January Jones), though she’s left no word that she’s looking for him.  When he bolts from the hospital to attend an international pharmaceutical convention at the upscale hotel where he was expected to deliver a speech, his wife doesn’t recognize him and another man (Aidan Quinn) has assumed his identity as her husband.  Leaving him the odd man out, none of this makes sense, yet he has no way of explaining who he is with little money and no identification, and even Google searches for his name and position have been replaced by photos of Quinn.  Who is this guy, and why all of a sudden does he suspect men are following him?
This relatively young Spanish director does have an energetic flourish with speed and pace, accentuating the desperate straits of a man who has had his identity stolen from him, yet still has the smarts to pursue all the missing angles he can find, where a nurse at the hospital slips him the name of an underground former East German Stasi figure (Bruno Ganz) who has a way of finding people.  Ganz is terrific in the role and is easily the man of interest in this movie, as his home is lined with old Army photos and a wall filled with commendations.  He adds a well needed coherent literacy to the script about a man who is living in a muddled state of confusion.  When Neeson tracks down the taxi driver, who reluctantly agrees to help despite being an illegal Serbian worker who relentlessly avoids the cops, the paranoid mood escalates when two contract killers arrive unexpectedly at her doorstep which leads to a thrilling sequence where Neeson and the girl have to fight their way out of certain death.  At this point, the two are linked, where despite not knowing why they’ve been targeted, they are in the thick of it, followed immediately by a hair-raising car chase sequence right through the middle of Berlin’s crowded downtown streets, past historical relics such as the Victory Column and the Brandenberg Gate that leaves nothing but panic and destruction in their wake.
Like Jason Bourne from THE BOURNE IDENTITY (2002 – 2007) trilogy, Neeson continually has flashbacks, which are the only clues to his previous existence, reminders of a life he once knew, and the film is thrilling while Neeson attempts to make sense out of who he is, as Ganz pushes unorthodox secret buttons behind the scenes, but becomes all too predictable once he figures it out, where it’s literally handed to him on a platter of belated clues and explanations that really undermine the whole fun of the picture.  When it eventually comes down to just good guys against bad guys, that’s a whole lot less interesting than a throwback to the Cold War era style film presented in shattered pieces with fragmented images and delusional thoughts about a missing identity, where Neeson is constantly besieged by threats against his life while also trying to put together the missing mosaic of his apparently stolen life.  By the time Frank Langella arrives on the scene, the ending is deflated and all too contrived, like letting the air out of a balloon, but there’s plenty of fun while Neeson’s life is in turmoil, also excellent use of shots in the snow as well as ice flowing in the river.  Perhaps the thrill factor for the audience might never have diminished had the character been left “unknown” and in the dark, which also leaves open the possibility of a sequel, a concept the director has already embraced.
Posted by Robert Kennedy at 10:13 PM