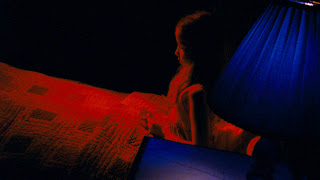 AMER – video                              C
Belgium  France  (90 mi)  2009  ‘Scope  d:  Hélène Cattet and Bruno Forzani
This is a style-over-substance horror film, where the focus of attention is on a single character beginning as a young girl, where her hyperactive imagination continues to get the better of her, where much like REPULSION (1965), we see the world as she perceives it, complete with all the built-in anxieties and fears, where for most of the film, which continues through teenage and adulthood, it actually exists in the world of the imagination which blends seamlessly into real life, using camp retro music to add occasional tongue-in-cheek humor.  This does give the director team a chance to exhibit their considerable skills behind the camera, as they obviously relish what they’re doing.  But most assuredly, despite the artful high-grade, glossy coating, this film is not for everyone, as evidenced by plenty of walkouts throughout the journey.  While this is entirely a genre film, exploring the various ways to terrorize and scare the living bejesus out of a living victim, where she seems to be doing a pretty good job of it all on her own, there’s barely any dialogue and not a hint of character development, which makes this more of an exercise than a film with any complexity or depth.
Nonetheless, the film has a visually startling Tarantino-esque quality to it, even if it seems like a cross between the exaggerated, overly serious style of Sergio Leone films and an uninhibited, sexually exploitive perfume commercial.  What distinguishes this film is its air of artfulness, as the production design is among the best, but the film falls short in having any emotional connection or meaningful relevance in anyone’s life, deteriorating into a visualized hell that exists for its own sake, as the tension in the early sequences are all but forgotten by the finale, where any evidence of suspense has completely evaporated.  However, because it has such a stylishly appealing look, it’s bound to at least initially catch anyone’s eye, that is until they see what the directors are up to, which is instantly obvious.  The child torment sequences with actress Cassandra Forêt as Ana have an unsettling PAN’S LABYRINTH (2006) feel to them, as she is constantly besieged by demons both living and dead, among which include her constantly berating mother who would just as soon get rid of her and throw her out of the house, calling her a witch, but most all of this seems to exist in her mind.
Yet with a sound design that accentuates every creaking door, water drip, and eerie unexplained sound that seems to come from the dead, Ana is besieged by what lies under the bed and behind closed doors, constantly suggestive of lurking shadows behind the enormity of empty space to fill in a huge mansion that appears to be haunted.  As a sexually provocative teenager (Charlotte Eugène-Guibeaud), Ana is shown in slow mo as she prances in front of a group of bikers, where close ups of the biker’s eyes and Ana’s short hemline are intermixed with near frantic regularity, where the film itself, again very much tongue-in-cheek, exploits the exploitive genre.  Perhaps the weakest yet most grotesque element is reserved for Ana in adulthood (Marie Bos), most likely because of how macabre and demented her fears have become, turning into a full-fledged splatter film with the help of the always available switchblade, followed by scenes for the budding necrophiliac.  This film panders to the voyeuristic element by providing ever more uncomfortable imagery, but to its credit, it doesn’t hold back and aggressively persists in going full throttle.  While this may be a dismal exercise to endure for some, there is ample evidence to suggest others will be more than just a little bit titillated by the highly exaggerated sense of self-indulgence.
Posted by Robert Kennedy at 1:00 AM