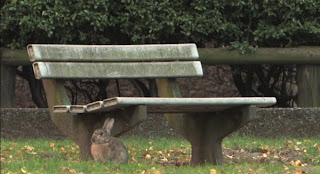 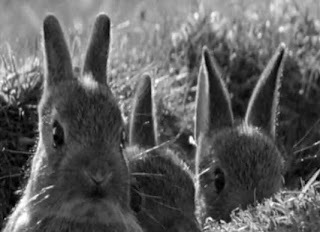 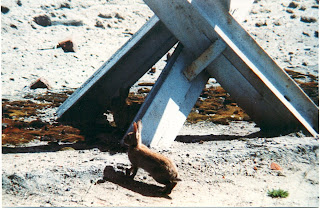 RABBIT À LA BERLIN                            B+
Germany  Poland  (51 mi)  2009  d:  Bartek Konopka
This is a delightful short film that’s likely to catch the viewers off guard, as it takes a look at Berlin history from the perspective of oddly chosen innocent bystanders, the timid little furry creatures that burrow into holes at the first sign of danger while also reproducing several times a year.  A truly amusing Cold War commentary is offered from the perspective of rabbits that just happen to proliferate in the grassy lawns across the street from the Potsdamer Platz, a place of historical merit.  Shown initially with a blend of cuteness and curiosity, the film opens in Black and White, where the war has obliterated one of the most bustling intersections in Europe, leaving behind nothing but rubble, but also, strangely enough, rabbits.  Narrated by Michal Ogórek, it reeks of sarcasm and dry humor, but the Zelig-like editing scheme showing rabbits witnessing the German reconstruction at Potsdamer Platz is hilarious, where construction noise initially drives them into their burrows only to wake up a few days later to see the Berlin Wall, with barbed wire and anti-tank barriers constructed around what used to be their friendly environment.  Adhering to the official party line, the rabbits realize they have been shut in for their own good.  As the wall also keeps their natural predators out, this is seen as a godsend.  Since rabbits are by nature friendly creatures, they warm up to this new renovation, and can be seen resting comfortably protected from the shade under the upright anti-tank slabs.
Former watchtower guards recall how endlessly boring it was passing the time in the tower, where the only thing that held their attention was watching the rabbits at play in the field directly below the tower, where shots of them using standard military binoculars to watch the rabbits scurrying below are amusingly shown.  Despite the rapid rate of growth in the vicinity, each new project threatening to wipe out their grassy fields, they miraculously survive, even after government attempts to round them up, stretching nets across the landscape and scooping them up, placing them imprisoned in boxes, where we can see them staring out the little air holes.  Located at the center of several major development projects, the architectural design always seems to somehow bypass rabbit turf, leaving them a little bit of open space just in front of the Wall, an area where nothing else can be built, known to humans as the Death Zone, reminding them of the penalty for attempted escape (where we see corpses carried off by guards), but again, a godsend for the rabbits.  There’s hilarious footage of great heads of state who come visit, like Khrushchev, Castro, and even JFK, who can be seen waving to the crowds, which also happens to be bunny turf.  Despite being under siege for almost thirty years, they survive all the Cold War madness, where their seemingly nonpolitical stance is a welcome relief to the nearby population, often lovingly photographed for family albums.
When the Wall eventually comes down, again overnight without explanation, the rabbits all disappear immediately to the other side, like the Promised Land, where they venture into virgin territory untouched by rabbits for decades.  However, to their surprise, it’s much harder than it looked over on the other side.  Just like Wallace and Gromit in A CLOSE SHAVE (1995), the clever use of alarming newspaper headlines expose a panic stricken public crying foul at a sudden outbreak of rabbits overrunning West Berlin.  Like the Wild West, vigilante justice prevails, where ordinary citizens suddenly turn into hunters to eradicate their neighborhoods of the problem.  The poor critters are rounded up in droves and used for rabbit stew.  Yet still they survive, as many returned to their once thriving grassy fields in front of the Potsdamer Platz, which still offers a chance for a good life, but now wary of hunters and the false dream of inhabiting beautifully landscaped golf courses, as seen in a gorgeous painting, two rabbits sitting overlooking the giant expanse of green—dreaming, hoping.  Back on friendly turf, rabbits may not be so plentiful, but they’ve survived.  Written by the director along with his cinematographer Piotr Rosolowski, this clever rabbit world satire resembles the similarities and confusion East Germans must have faced when they were suddenly free to explore the uncertain world lying in wait on the other side.
Posted by Robert Kennedy at 3:24 AM