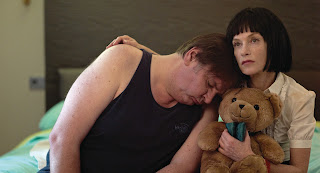 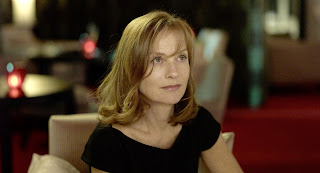 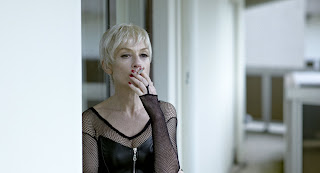 SPECIAL TREATMENT (Sans queue ni tête)              C-
France  (95 mi)  2010  d:  Jeanne Labrune
This is another Isabelle Huppert vehicle, which by itself offers promise, but there’s nothing special or remotely interesting about this film, as it features people who are continually bored with themselves.  Without exploring the origins of this ennui, the director instead chooses a dry, lighthearted attempt to show unhappy professionals, call girls and psychiatrists, who have outgrown all interest in their professions, where Huppert as Alice is in a midlife crisis as an expensive call girl with a taste for the finer things in life, but a growing disinterest in her often ridiculous clientele.  Huppert has played prostitutes before, but brings nothing new to the role, as initially the focus of attention is on the eccentricities of her clients, which is mildly amusing, but also stereotypical.  When one of her johns decides to play rough, she goes into a crisis mode afterwards wondering why she’s even willing to put up with this nonsense.  In a simultaneously told parallel story, Xavier, a bored therapist (Bouli Lanners) sits and listens endlessly to people who have little or nothing to say, again a stereotypical depiction where fortunately the patients shown are not seriously disturbed, as the therapist isn’t listening anyway.  And to make matters worse, his wife, Hélène (Valérie Dréville), a fellow therapist, has lost all interest in her husband, forcing him to find alternate accommodations.  Within this set up, the director who also co-wrote the script decides to play musical chairs with the storyline possibilities.
Advancing the story through small vignettes, much of it shown through repetitious set pieces where Alice and Xavier are both aloof, going through the motions of the same routines in life, growing bored and disaffected, where they barely know themselves anymore, each decides drastic measures need to be taken.   With Xavier’s marriage in trouble, he decides he needs to spice up his ordinary love life, so why not a call girl, while Alice thinks the right shrink may help her open new doors of discovery.  Their scenes together never generate much of a spark, as each detests themselves too much, where they can’t shake the feeling of self-loathing.  The truth of the matter is there’s not much to this movie, as it’s not really about anything.  Richard Debuisne has co-written and also acted in each of Labrune’s last 3 films, where he plays a hospital psychiatrist dealing regularly with the mentally ill.  But even in this setting, there’s an underlying lightness to the subject, but Debuisne is excellent, appropriately serious and slightly offbeat in the role.  What we really see is Huppert go through a series of costume changes, as she’s an actress who makes herself right at home in the wardrobe department, much like Jonathan Winters or Robin Williams finding humor with any available props.  She makes any role her own, and this one’s no different, adding an existential air of detachment and even sadness, where besides one fellow working girl (Sabila Moussadek), she has no close friends.  There’s nothing daring or original in this film, no great scenes, but there are excellent upscale production values and an icy cool musical score from André Mergenthaler that accentuates the coldness of the character’s interior worlds.  While there’s always a hint that more could be lurking under the surface, this is more a comedy of manners than a serious drama.
Posted by Robert Kennedy at 11:58 PM