Two in the Wave 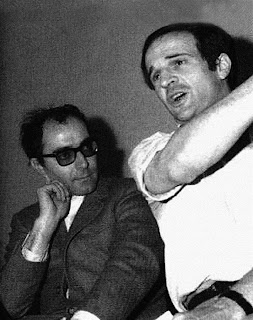 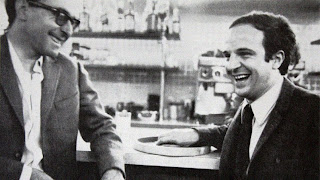 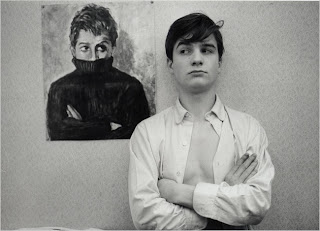 TWO IN THE WAVE                     B-
France  (91 mi)  2010  d:  Emmanuel Laurent
This is a delightful romp through the archives of the late 50’s and early 60’s French New Wave films, specifically referencing François Truffaut, whose landmark film 400 BLOWS starring a young 14-year old Jean-Pierre Léaud was a sensation at the Cannes Film Festival in 1959.  Simultaneously, a fellow writer from the Parisian film magazine Cahiers du cinema, Jean-Luc Godard, was busy readying his first film BREATHLESS, which opened nearly a year later also to resounding success, elevating both young novices to becoming spokespersons for the nouvelle vague.  Since both were erudite and educated, used to expressing their thoughts on paper, they did not shy away from the cameras which followed them everywhere, plastering them on magazine covers, making them an international sensation.  Breaking all the rules about rigid narrative filmmaking, much of it just copying traditional formulas guided more by economics than genuine inspiration, this brash group of young guns broke away from film studios and invented a new art, preferring to shoot on location where their editing and visual style expressed a new sense of urgency and personal expression, inventing new rules as they went along.  The trip down memory lane guided by clips of their early films is a real treat, as they play out like personal photo albums or favorite songs, as so many audience members will recollect seeing these films and recalling what a vital part they played in transforming their own attitudes about art and cinema.
Both Truffaut and Godard are seen in clips as documentary interviewers as well, where Truffaut wrote a legendary book from his Hitchcock interviews, while Godard wrote a film CONTEMPT (1963) that was largely inspired by his interviews with Fritz Lang.  The young novices idealized directors who exhibited a flair for cinematic art and imagination, like Renoir, Hawks or Hitchcock, or who could express emotions through an unabashed realism, like Nicholas Ray.  Unfortunately, many of their compatriots were left out of this venture, as there is no mention of Chabrol’s LE BEAU SERGE (1958), oftentimes cited as the first New Wave film, or Eric Rohmer who built a career around character observations and dialogue, or the brilliant contributions of Jacques Rivette, who they all admired as perhaps the most radical artist among them, while including clips from Agnès Varda’s shorts, where we see a playful side of Godard in front of the camera, and Jacques Demy’s LOLA (1961).  This oversight streamlines the density of the subject matter, which is not so much a historical account of the New Wave, something the public appears clamoring for, but focuses instead on just two contributors, and barely makes a dent on their films, really only exploring their early years where each suffered box office casualties along with their successes.  Interestingly, despite noting their radical artistic achievements, the film doesn’t weigh in with any historical analysis or perspective on either man’s career.  In fact, there is no one onscreen who disputes the film’s findings or who offers a dissenting view.  In an interesting foreshadowing of events to come, both men are seen rallying the troops in 1968 and consolidating their combined voices against the French ministry’s firing of legendary film archivist Henri Langois from the Cinémathèque Française, even halting the Cannes Film Festival that year, which led to the turbulent street demonstrations that reinstated not only his position but the needed funding.
Activism and artistic differences eventually leads to a permanent artistic rift between the two men in 1973, where Godard embraces radical politics as an essential ingredient to any socially relevant art, while Truffaut believes art transcends politics.  Truffaut’s DAY FOR NIGHT (1973), absent any politics, provokes an excoriating public denunciation from Godard, calling it irrelevant and nothing more than a bourgeois trifle, while Truffaut countered with the publishing of a twenty-three page personal critique of Godard, calling him a sham, an illegitimate spokesperson for the working class as he lives a typically bourgeois lifestyle surrounded by wealth and riches.  The two men never spoke again for the rest of their lives, like something out of CITIZEN KANE (1941) when Orson Welles stopped speaking to Joseph Cotton.  Earlier in the film, Godard relished a Welles quote:  “Art as a moral stance against tyranny.”  Under the circumstances, however, considering the contributions both have made to cinema, their public spat seems petty and childish, even if their respective views both happen to be true and offer the best analytic film criticism this movie has to offer.  What is especially sad is seeing both men competitively vie for the personal allegiance of Jean-Pierre Léaud, the poster child of the New Wave, who feels compelled to continue to work for both directors while being pushed and pulled from both ends, like a child in a divorce custody case.  While this documentary only skims the surface, using ridiculous images of actress Isild Le Besco paging through old copies of Cahiers, the real interest lies in reviewing clips from the early films which come alive onscreen, beautifully capturing the vibrant energy of youth, a timeless moment in cinema history when the world stopped to watch and listen as the medium playfully spit out the past while rejuvenating itself.
Posted by Robert Kennedy at 1:43 PM