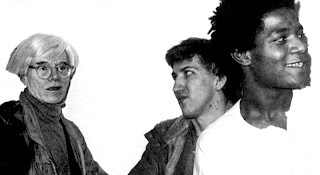 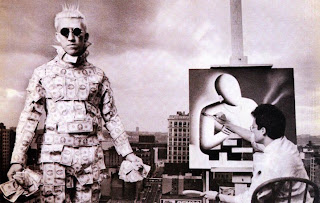 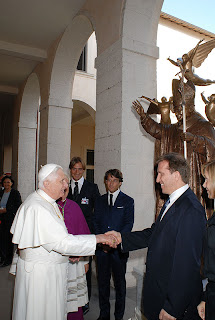 CON ARTIST                       C
USA  (84 mi)  2010  d:  Michael Sládek
This is another example of anyone can point a camera on a given subject and make a film, but it’s something altogether different to create something of any worth or significance.  Quasi-artist Mark Kostabi was briefly in vogue back in the 80’s and 90’s as an irreverent, self-mocking artist who became something of a vulgar and giant-sized painter by committee as well as a performance artist, always scrounging up publicity for himself, insulting his contemporaries, calling modern art a sham, which earned him a lot of money at the time by reproducing large quantities of mass produced artworks, when a film like this might have held some resonance.  But since his time has passed and few people take him seriously any more, refusing to be bamboozled by his self-serving schtick, a documentary that doesn’t delve into his more pertinent biographical past but completely focuses on his irrelevance in the present just feels like a waste of time, as we learn absolutely nothing earnest about this man.  The subject is obviously more interested in seeing himself projected onscreen, where he is allowed the carte blanche freedom to press the audience’s buttons, as if that somehow means that he still matters.  The obvious question that comes to mind is wondering whether the filmmaker is actually in charge of his own film, or the guy performing the tricks in front of the camera?   I’m not sure this question is ever answered, which leads to an incomplete and superficial portrait of a man who loves and needs to be the center of attention.
Early on we learn that he has rarely ever been seen painting, but instead considers himself a conceptual artist who offers ideas and has his associates do the painting, which he then signs as his original work and takes the money.  It is quickly pointed out that he’s more of a shrewd businessman, as he’s able to secure large sums of money for these paintings, largely living on his reputation in the past when he was the youngest artist at age 24 in 1984 to be included in the permanent collection of the Museum of Modern Art in New York, right alongside Andy Warhol and Jeff Koons, known for their satirical social commentary on the banal and the mundane.  Kostabi even designed the album covers for Guns 'N' Roses (Use Your Illusion) and The Ramones (¡Adios Amigos!).  Today, however, he’s no longer welcome at these prestigious museums as he’s soiled his own name, calling himself a con artist who has swindled the art world, bragging openly until the art world started to take him seriously, dropping him with a loud thud, turning him into a game show host that throws dollars at people who can come up with the best titles for his own untitled works in Title This.  While the show itself offers little else other than a platform for its host, it’s probably seen by less people than the kitchen network.  When he’s introduced to a group of Yale art students as a contemporary artist, but offers nothing on the subject of art, and instead ends up talking about his public access TV game show, they sit in utter astonishment, as if they've been punk'd.
Some viewers may find it easy to laugh at this clownish portrait, and admittedly there are quite a few amusing moments, such as a neighbor recalling Kostabi’s childhood family, describing them as “strange,” where it wasn’t surprising for his father to go outside at 2 or 3 am and play the accordion, singing at the top of his lungs, also featuring a pepped up soundtrack, especially over the end credits which can be cranked up to the max.  But the only scenes that truly matter are when he’s not hamming it up in front of the camera, when he comes face to face with the fact that he’s really pretty pathetic, having such little self esteem that he constantly has to reassure himself by being the center of attention, like a spoiled and indulgent little brat who never had to grow up.  It is pointed out that he’s incapable of showing empathy toward others, suggesting he may have a form of Asperger’s Syndrome, and instead lives in his own little world where he remains the center of the universe.  In this sense, this is the saddest of portraits, but in the very next breath he throws that thought aside and continues to pursue his illusions, as if that’s the only place where he feels truly welcome.  He is surrounded by an entourage of people who serve his needs, who are likely paid handsomely to tell him what he wants to hear, but the sad truth is he’s something of a fraud, both as an artist and as a human being, where no one likes to kick a man when he’s down, but that’s what this film feels like, handing Kostabi the rope to hang himself with—hardly novel or scintillating filmmaking, which never rises above the unprincipled ethics of the subject at hand.  In the end, it’s an incomplete talking heads picture where Kostabi always has the last word, but we’re left without a clue how this man once took the art world by storm, performed jazz solos onstage with Ornette Coleman, and was even offered a commission by the Pope.
Posted by Robert Kennedy at 12:47 AM