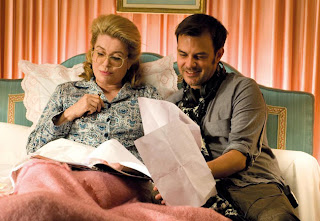 Catherine Deneuve with director François Ozon on the set 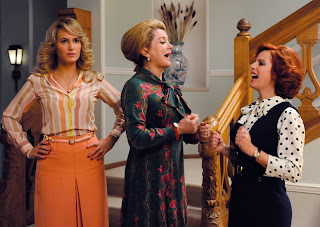 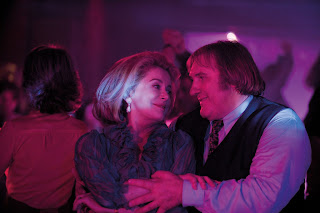 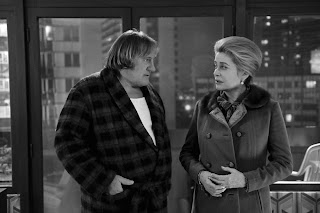 POTICHE                                    B
France  (103 mi)  2010  d:  François Ozon
Catherine Deneuve and Gérard Depardieu first worked together in Truffaut’s THE LAST METRO (1980), where Deneuve kept the theater going in Paris, hiding her Jewish play-writing husband deep in the bowels of the underground of the theater during the Nazi occupation, with Depardieu playing a French resistance fighter who also joined her onstage as her leading man, working together 5 times in the 1980’s, again in André Téchiné’s CHANGING TIMES (2004), making this their 7th film together.  They work together like long lost friends, and their stature only adds respectability and pleasure to this candy colored, picture post card recollection of life in the late 1970’s, which plays very much like a TV sitcom.  With the frequent use of split screens and over the top piped in strings, Ozon floods the screen with saturated color and light, also stereotypical characters, at least seen by today’s world.  Adapting a successful play written by Pierre Barillet and Jean-Pierre Grédy, the film version is a farce, like joyously watching a train wreck as it happens, where Deneuve’s sheltered and seemingly harmonious world as the trophy wife of a ruthless factory owner (Fabrice Luchini) in a small provincial town covers up his egregious acts as an arrogant, philandering crook who thinks only of his self-interest, and to hell with everyone else, cooking the books, having a continuous affair with his secretary (Karin Viard) while also regularly seeking women’s company in high end night clubs at the company’s expense.  When a work stoppage at the umbrella factory he runs that she inherited from her father causes him to come to blows with striking workers, he is placed under immediate medical care, causing her to step in and run the factory during his absence.
While most think of this temporary fix as something of a joke, Deneuve enlists the help of the Mayor (Depardieu), a local Communist whose activist tendencies are the opposite of what her husband stands for, so they make an engaging pair, especially when they take a little walk down memory lane, using younger actors to play their shared rosy memory of much younger times, an amusingly sunny recollection where they each looked picture perfect.  Deneuve, once deemed the most beautiful woman in the world during the 1960’s, is now 67, and Depardieu, horribly overweight but as natural as ever, is 62.  Both apparently wear wigs.  The mayor agrees to get the ball rolling in establishing negotiations with the union, where Deneuve wears pearls for the occasion, claiming they paid for them, so the workers may as well share in their enjoyment.  Knowing many of the workers by name, including the family they came from, as many worked for her father, Deneuve immediately develops a hands on style that gets the factory back on its feet and running smoother then ever, involving the help and participation of their two otherwise floundering children, Judith Godreche and Jéremie Réniér, both amusingly cast with an ultra right and ultra left viewpoint, where the dizzying naiveté of each child leaves one wondering if this really resembles the era of the American 50’s as portrayed on TV, yet the color scheme is definitely the 70’s.  When her husband returns to his rightful position, he’s surprised to learn that the rug has been pulled out from underneath him, where he’s literally been stripped of his power and his position, relegated to an out of the way TV room where he can be the dutiful trophy husband.
Of course, there are more twists and turns, where the comedic battle of the sexes, and the social classes, only develop more forks in the road, each turning the tables on the other, all shot with a sunny disposition and a delightful sense of humor.  While there are dark moments, they are brief and touchingly eloquent, usually followed by out and out laughs.  There’s a wonderful cameo from Sergi López, the sadistic Fascist army officer in PAN’S LABYRINTH (2006), also the wayward father in Ozon’s surreal RICKY (2009), playing a truck driver who offers more than a helping hand.  The children’s development into something more substantial is clever, as is the eye-opening awareness of the secretary, as all figure prominently in the outcome.  There are some particularly observant variations on a theme, as there’s a musical chairs of the children’s love interests, each humorously cast in a different sexual angle.  Everyone grows out of their stereotypical depiction except the husband, a guy who simply refuses to change with the times, remaining despicable until the end, even as it gets him nowhere.  But this is the Deneuve and Depardieu show, where they have a seriously dated dance sequence in a nightclub that is adorable, where the Bee Gees can distinctly be heard in the background, shot with all the kitsch and tongue-in-cheek that Ozon can muster.  By the finale Deneuve actually breaks out into song, a deliriously campy number that couldn’t be more poignantly life affirming, singing about how beautiful life is, bringing the curtain down in an exquisitely “French” moment that encapsulates a kind of harmonious unity where all is right in the world, like the memorable final chorus of Mozart’s Marriage of Figaro which the audience is happily humming in unison as they leave the theater.
Posted by Robert Kennedy at 1:43 AM