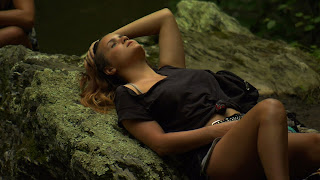 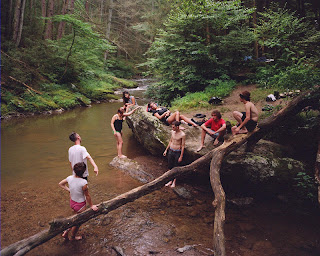 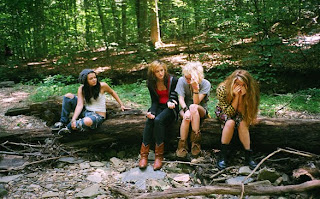 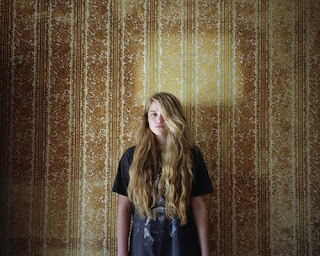 PUTTY HILL                          B
USA  (85 mi)  2010 d:  Matthew Porterfield
This is what you might call spur-of-the-moment filmmaking, because as the filmmaker was set to begin filming one movie called METAL GODS, the financing from grants for that project fell through at the last minute.  But since a camera crew and a group of non-professional actors were ready to go, they instead shot this film on the fly from a hastily put together 5-page script, costing $20,000, shot on HD Cam in less than two weeks in Baltimore in August of 2009.  It’s taken nearly two years following a year on the festival circuit for this project to find the public, and even then, opens on very few screens.  Porterfield’s first film, HAMILTON (2006), ran just slightly over one hour and felt like a minimalist, non-narrative mood piece, a near wordless, slice of life mosaic that was interesting in the abstract, where the story was secondary to the rich construction of character and place, where the artful beauty was in lyrical observation.  Once more, offering few embellishments and only a scant narrative, this film offers a window into a lower-middle class fabric, feeling almost like eavesdropping, offering a rare authenticity into the world of the people inhabiting this neighborhood.  But in an unusual twist, the director himself from behind the camera asks random questions to kids on the street that have a connection to a young twenty-year old who recently died of an overdose, asking if they knew him, for how long, and if they’re going to the funeral service.  This is reminiscent of THE BIG CHILL (1983) or RETURN OF THE SEACAUCUS SEVEN (1979), but it’s a much more scattered approach, as many of the friends barely know one another, and are connected to only one small piece of the puzzle, while his neighbors may have known him his entire lifetime.
This approach offers a broader range of social fabric, including kids coming in from out of town who fit right into their little cliques that they were a part of when they left.  Unlike the spoiled brat rich kids seen on TV shows or in Hollywood comedies, these kids lead more modest lives, where a large part of it is sitting around and doing nothing, feeling bored and alienated not only from the adults, but the world around them.  Many of their conversations together don’t really lead anywhere, as feeling disconnected and not having anything to say is what they’re used to.  The offscreen questions have a way of bringing people together by a common purpose, but the viewer never gets the impression this group is a cohesive whole, more like a collection of various parts, where the camera observes their behavior one piece at a time, like a finely observed character study.  There is an exquisite scene where a bunch of kids go swimming in the natural flora of a local creek, and another where the camera finds a lone soul at a bike and skate park, where the commonality of age and interest begins to represent a social strata, but more often than not we observe these characters one at a time as they interact with family or friends.  Unlike HAMILTON however, here it feels important to know the myriad of relationships, such as who’s related to the family of the deceased.  With many of the kids feeling like interchangeable parts, this gets lost in the maze, which is a troubling factor.  The film simply doesn’t provide much help in identifying the relevant players.  Instead, it prefers to mix them all together while insisting upon its own structural ambiguity, which doesn’t really work with a documentary style questioner.
Nonetheless, much like Portland indie director Gus van Sant, this film offers a unique portrait into adolescence just by allowing kids to be kids in their natural habitat.  The cluttered interior rooms where they hang out are especially insightful, having a much more anarchistic look of rage and alienation, offering few signs of the typical look of teenage conformity.  The young high school girls, however, all look like hippie chicks, where in that respect, this could just as easily be a West coast van Sant production.  Gone are the copycat mall reproductions, each kid an Abercrombie & Fitch assembly line copy of the next, including that mile-a-minute mode of Valley girl speech.  These kids speak naturally, even quietly, without the incessant use of cell phones and without forcing their opinions on others, where none of them seems to spew a political agenda.  But despite the window into youth culture, which certainly feels authentic, one wonders if that is enough, especially as it’s all leading to a funeral service which has a noticeably quicker editing scheme, where people are cut off abruptly, which doesn’t happen anywhere else in the film.  As a viewer, one might have preferred to keep the cameras rolling, continuing the theme of feeling like an observer at a real event, such as the rambling but unforgettable bar sequences with Gene Hackman doing a striptease from Jerry Schatzberg’s SCARECROW (1973) or Cassavetes’ classic imperfections in the roundtable bar tributes to the deceased from HUSBANDS (1970).  Instead, perhaps due to lack of time, this sequence feels hastily put together, where we’re only seeing the edited highlights, like a greatest hits montage.  Still, despite the quibbles, the film extols a natural sound design where cars passing and dogs barking are every bit as important as words getting lost in various conversations, where like Altman, the director can change the focus not just with the lens but with the use of sound.  The final sequence returns to an exquisite lyrical abstraction, a free-ranging experimental design of music and light that inventively goes out in style.
Posted by Robert Kennedy at 1:11 AM