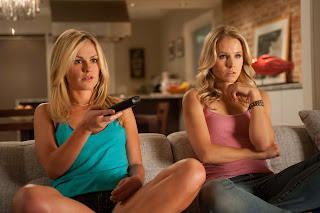 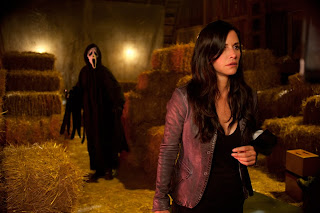 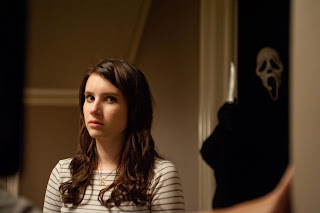 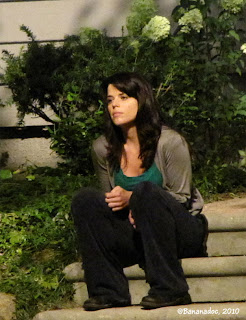 SCREAM 4                               B
USA  (111 mi)  2011  ‘Scope  d:  Wes Craven
In keeping with the theme of the original, SCREAM 4 parodies all horror films, but in particular the initial SCREAM (1996), following the same format, opening with a telephone call, the familiar voice of the demented teen stalker, and before you know it, a handful of teenagers sitting around watching horror movies are dead before the opening credits, where one in particular, an especially brief appearance by Anna Paquin, is drop dead hilarious.  Part of the humor throughout the film is listening to teenagers wise crack about how much they know about horror films, how they would never be so easily fooled.  What Craven does especially well is create set ups for potential victims, where the audience can foresee murders before they happen, causing Craven to bypass convention and move in another direction, attempting to keep the audience off balance while always delivering the goods, where the teen deaths are usually as amusing as they are bloody.   Ace tabloid reporter Gale Weathers (Courteney Cox) is now married to Deputy Dewey (real life husband David Arquette), who has now become the town’s Sheriff.  But the sleepy California town of Woodsboro has been quiet since the murder rampage exactly one decade ago.  Weathers’career is dead, having documented the grisly murders, but has since hit a dry spell, striking out in her attempt to write fiction.  Neve Campbell as Sidney Prescott is back in town promoting her own book, where upon her return, what greets her but light posts that have appropriately been decorated by Ghost Face masks, apparently a prank from ghoulish teenagers.
With the familiar core cast reunited, Dewey is called away from the flirtatious advances of the new Deputy Judy Hicks (Marley Shelton) to investigate the new murders.  The ten year anniversary of the only event the town is known for is being celebrated with a new bloodbath.  More havoc ensues, especially the introduction of a new cast of teen characters who are just as clueless about their future, yet brag continuously with that know-it-all bravado that will surely lead to some untimely deaths.  Sidney’s cousin Jill (Emma Roberts) is part of the rat pack of girls, and is taken under the police protection provided for Sidney, which doesn’t stop one of their pack, the pretty girl next door with the large breasts, from getting toyed with and attacked right in front of their helpless eyes.  Despite this gruesome sight, Jill finds continued solitary confinement a form of police harassment, as it is unthinkable for teenagers to spend any time alone away from other teenagers.  It’s simply written that way.  It’s all part of the teen formula where they stick together.  Weathers learns a few new tricks from the high school cinema geeks, one of whom (Justin Michael Brandt as film geek) runs a live webcam on the headset he wears, which documents on the Internet whatever their feeble lives experience, which obviously isn’t much, but this explains how the new stalker would have to update their murders with the latest technology, where the murders would have to be caught live in order to register a pulse with the high school population.
Of course, following the format of the original SCREAM, this all leads to another giant drinking and party sequence where the murderer is on the loose, another synchronized orgy of blood and death that defines the genre.  For the occasion, the cinema geeks are running their annual Stab-a-thon film fest, movies based on the Gale Weathers books, all in commemoration of the original murders.  Craven, again relishing the movie within a movie concept, has plenty of fun re-enacting some of the original scenes, using Heather Graham in Drew Barrymore’s opening sequence, where an attempted murder takes place in real life while the same thing is happening onscreen.  A town without pity that has been afflicted with murder and mayhem, spawning more twisted and demented teens who are the offspring of the original murder spree, shows a callous disregard for anything real, where life is just a continuing joke, and kids remain fuckups from generation to generation.  This gripping finale matches the original while offering some social insight into the overpowering need to be needed by today’s teens, afflicted with shortsightedness and their ferocious desire to display their lives on the Internet for all the world to see, thinking this somehow makes their world rock.  Not quite as wild or original as the first, which introduced this smart-assed stalker formula to the world, both written by Kevin Williamson, this is nonetheless a well-made and thoroughly enjoyable horror film that ratchets up the tension with equal amounts of wry, satiric commentary.  While it remains a bloodbath, this offers blood and gore with a different kind of relish and overt glee rarely exhibited in horror flicks.  The common denominator, however, is that teens continue to be clueless about the world around them, easy pickings for the town stalker.
Posted by Robert Kennedy at 4:37 PM