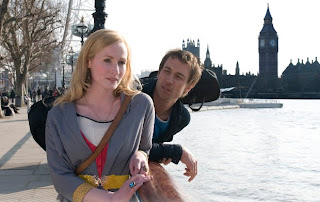 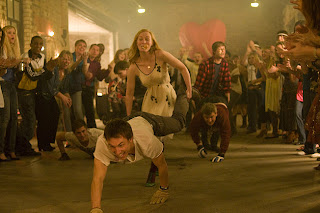 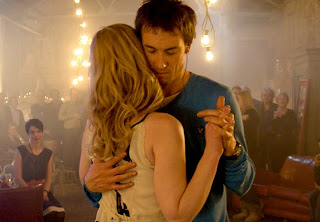 FORGET ME NOT                 B-
Great Britain  (93 mi)  2010  ‘Scope  d:  Alexander Holt and Lance Roehrig
A different kind of relationship picture, as the sparks don’t really fly in this one, rather it’s a more measured and deliberately paced story of two people meeting one another quite by accident, where the initial politeness leads to genuine concern, which has a staying power all on its own.  While it pales in comparisons to ONCE (2006), or either of Richard Linklater’s Parisian bookends, BEFORE SUNRISE (1995) or BEFORE SUNSET (2004), this draws similarities with a lead singer/songwriter and the late night walks through the picturesque streets of London, but chooses to go in a different direction.  Tobias Menzies opens the film strumming his guitar and singing in a pub, where no one in particular is really paying much attention except perhaps the barmaid, Genevieve O’Reilly, who sneaks a few peaks between her rounds.  Ironically, the song is a rallying anthem style of song where no one is really joining in.  Afterwards, showing some difficulty finding the right key to his apartment, Will (Menzies) shows even more troubling signs once inside, as he’s disturbingly considering various ways of committing suicide, interrupted by a phone call from the barmaid reminding him he left his guitar behind.   As his concentration has been broken, he decides to retrieve his guitar, returning home a short time later, where he hears screams on the street where a young woman, Eve (O’Reilly), is being accosted by an overly aggressive drunken customer.  After intervening, the two run to safety, which leads to a few awkward silences before Will agrees to walk her to the transit station, only to discover that it’s closed.  Rather than wait a half hour for a hired cab, they decide to walk.
What takes place is a rather on again and off again relationship, where just as they seem to be hitting it off, Will will offer a strange or negative comment that sends a heavily guarded Eve back into the exit mode, eventually escaping into the night to a party that Will showed no interest in attending with her, despite her genuine appeals.  The party itself is bizarre, as we hear no music, yet people are all dancing through the use of headphones, carrying on as they would at any party, but the lack of music was a puzzler to the viewer, usually one of the highpoints in similar movie scenes.  Will eventually changes his mind and joins her, where they spend the night losing themselves in silliness.  A good portion of the film just follows them walking through the near deserted streets in the late night hours, including a dimly lit walk along the riverbank, crossing a beautifully illuminated bridge and past the Houses of Parliament.  Almost by accident, they’re still together by morning, but barely know any more about one another.  She needs to visit her grandmother (Gemma Jones), however, for a serious medical assessment, as she’s showing early signs of Alzheimer’s disease.  The grandmother is irritable and feisty, becoming overly defensive about being the object of attention, finding everyone’s behavior towards her a bit rude and offensive, though afterwards, it’s unclear what she even remembers.
After getting caught in a downpour, think Rachel McAdams and Ryan Gosling in THE NOTEBOOK (2004) seen here:  (http://images.allmoviephoto.com/2004_The_Notebook/2004_the_notebook_003.jpg, the picture used on the cover of the DVD), where the two decide to head to Will’s apartment, quickly ridding themselves of their wet clothes, ending up in each other’s arms, where all is going as expected until the tone shifts suddenly, where instead of romance there is dysfunction, which becomes a complete mystery baffling Eve as well as the audience, which in its own way is strange and curiously unique, obviously too mystifying and too downbeat of an ending, so they tack on a much happier finale that at least is more open ended, but in doing so, they give away much more detailed information than the audience needs to know, which isn’t present anywhere else in the picture.  If truth be told, it was much more mysterious not knowing, which held a greater dramatic impact as a result, but the first time filmmakers fell victim of offering an overly sympathetic explanation that clearly disappoints.  A thread of introspection runs throughout this movie, along with a downbeat melancholia, accentuated by fairly typical piano and cello music, often used to reflect sadness.  These characters are haunted by much greater loneliness and social isolation than the more romantic comparison movies, where despite the lack of sexual sizzle, there’s a good deal of uncommunicated empty space between these characters, which the audience can read in any number of ways.  Opening with a suicide attempt, there’s obviously more going on under the surface than the viewer is ever allowed to comprehend.  Part of the mystery is trying to figure out the root of his detachment, which pervades to the core of his troubled character throughout, even when Eve and the audience are led to believe he’s really happy.  As it turns out, he’s not that happy, but whether he likes it or not happiness is thrust upon him.
Posted by Robert Kennedy at 12:36 AM