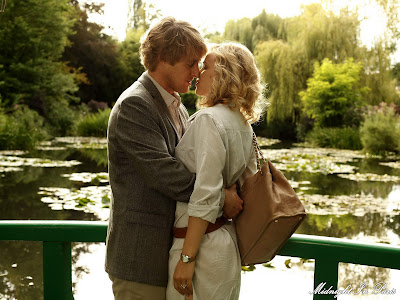 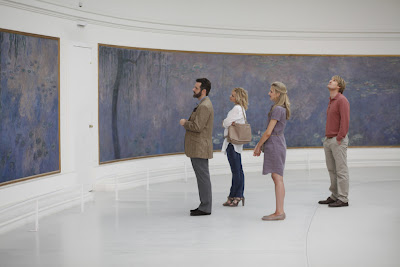 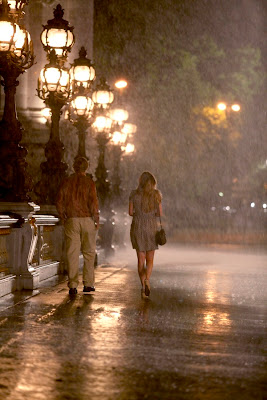 What’s a Woody Allen movie without wall to wall jazz music, this time by Cole Porter and Sydney Bechet?  This aspect of his filmmaking since the 1980’s remains utterly unchangeable, as certain as there is film in the camera, which adds to a peculiar similarity in all his films.  Can you imagine Bergman or Kubrick repeatedly using the exact same style of music in their films, and for decades on end?  This would be preposterous, as cinema is about seeking new challenges, not treading over the same material.  Unfortunately, with Allen, for decades now he has continued to make sophisticated comedies about the bourgeois rich upper class, attempting to blend a myriad of different character development into this examination of cultural snobbery, but let’s face it, they all feel pretty much alike.  So lately, instead of writing new storylines, he’s shifted his locations from New York City, to London, and now Paris, where the city itself becomes the main character.  While Allen’s view of Paris is steeped in historical romanticism, even using time travel here as a device to go back more than a hundred years to visit the artists who thrived here, the present day characters he invents feel exactly the same, tired, empty, upper class snobs who are of no interest to anyone, least of all themselves.  And herein lies the problem with every single Woody Allen film in decades.  It doesn’t matter what the story is or who the casting director chooses, it’s still inhabited by pompous, empty-headed, overly pampered human beings who would not make very good company in our own homes, as we’d immediately grow tired of their self-centered, opinionated arrogance.  Get a life, for Christ’s sake.

Allen was much better when he was writing about young lovers who were infatuated as much with the idea of love as each other, where the blossoming spirit of youth was infectious, where his humor was accompanied by a parade of personal anxieties about sex and commitment that were as revelatory as it was charming.  But in middle age, he has grown tired of the world around him, which barely interests him any more, surrounded by characters that hold little interest to movie audiences.  This, oddly enough, is the preface for his latest film, a rich and glamorous Hollywood couple, Rachel McAdams and Owen Wilson as Inez and Gil, in Paris accompanying her boringly rich parents on a trip, each approaching the idea of Paris in separate ways.  While they are engaged to be married, their future is uncertain, as he’s tired of writing successful movie screenplays, as he believes the economic security of living in lavish comfort is preventing him from writing a more challenging novel, while she is just waiting for him to give up on his dreams and accept the fact that he’s a fabulously successful movie writer.  While in Paris, they are joined by a former college professor, Michael Sheen as Paul, who sees himself as an expert on French art history, where Inez relishes the idea of shopping to her heart’s content and visiting the sites with her own personal guide.  Gil, on the other hand, is bored by the pretentious arrogance of Paul, a smug, pseudo intellectual who belongs in a dark study somewhere drinking brandy and smoking a pipe.  So while Inez runs off to drink with Paul, who she continually finds impressive, Gil sets off on his own each night walking the streets of Paris, searching for something a little more intensely personal.


Gil’s curiosity leads him into a treasure trove of his imagination, where an illuminated Paris of the 20’s mysteriously comes alive before his eyes, where he’s swept off his feet by F. Scott Fitzgerald and his manic wife Zelda, meeting a dour Hemingway who’s constantly talking about death and bravery, who introduces him to Picasso and Gertrude Stein (Kathy Bates), who’s willing to take a look at his latest manuscript.  Despite wearing modern era clothes and being somewhat befuddled at how he got there, Gil is immediately accepted into this inner circle of artists, including the shared mistress of both Picasso and Hemingway, Marion Cotillard as Adriana, someone who shares his fondness for the past.  With Adriana as his guide, so to speak, his tour of the iconic Parisian nightclubs of the 20’s has him sharing drinks at the same table as Salvador Dali, sensationally played by Adrien Brody, a man who invites Buñuel and Man Ray to his table only to revel in his personal obsession with himself and, of course, the recurring image of a rhinoceros.  Each night as he returns back to the hotel, Inez has little use for what she finds to be his monotonous adolescent excursions, continuing to re-live the fantasies of his youth, just wondering when he’ll wake up and become an adult.  This nod to yesteryear is cleverly handled, with all too brief appearances by some of the century’s greatest artists, where the present day era is suffocatingly boring in comparison, offering current traveling companions that simply reek of vanity and global indifference.  From start to finish, the sumptuous cinematography by Darius Khondji is glowingly luminous, where the opening montage of Paris is scintillating, capturing an unending landscape of mesmerizing Parisian allure.  While this does have a rapturous beauty as we glamorize the past in rhapsodic, dreamlike reverie, this is something of an idyllic, picture post card view of life, never really tackling any of the important issues of this or any other era, feeling instead like Allen is namedropping his way through art history.
Posted by Robert Kennedy at 4:03 PM