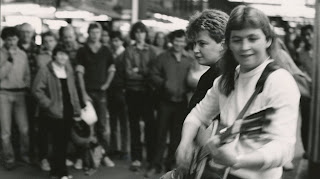 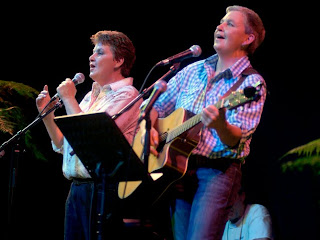 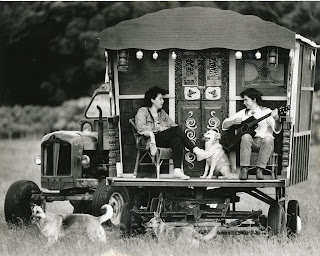 THE TOPP TWINS:  UNTOUCHABLE GIRLS                     B
New Zealand  (84 mi)  2009  d:  Leanne Pooley
There are some times [when] getting people to laugh, the whole crowd, that’s about the most political thing you can do.
—Jools Topp
Can a film be harmed by feeling too harmonious and upbeat?  Apparently not, as with barely an abrasive note to be seen anywhere in this loving portrait of twin sisters Jools and Lynda Topp, performing cowgirls who grew up on a dairy farm outside Auckland, touted as the country music loving, yodeling lesbians, they eventually become cultural institutions in New Zealand.  Their natural inclination for Vaudeville novelty acts as filtered through the Grand Ole Opry makes both of them something of a ham, each developing alter ego, comic side characters, but they couldn’t be more comfortable in front of an audience.  Perhaps the best footage in the entire film is shown early on when they sing on the streets as teenagers with Jools on the guitar busker style, where they are simply an adoring sister act with unstoppable energy and voices that blend marvelously together as one, where it’s hard to tell who sings what part, but as they stare into each others eyes as they sing, they couldn’t be more of a joy to watch.  It’s immediately obvious that they’re quite talented, especially for street musicians.  Realizing early on that they were both gay, with a brother who’s also gay, this was apparently quite natural for the two performers to be upfront and honest about it, never really having to come out of the closet, while it took their parents a little more time to process this surprising revelation.
As American folk musicians identified with various causes and protest movements in the 60’s, the Topp twins identified with New Zealand’s social change in the 80’s, including the anti-Apartheid movement, the protection of Maori land rights, gay and lesbian civil rights, and the right to keep New Zealand nuclear free, all winning causes that they helped advance.  Even the former Member of Parliament, Fran Wilde, who introduced and passed the 1986 Homosexual Law Reform Act that for the first time decriminalized homosexual behavior in New Zealand, gave credit to the Topps, indicating their wholesome cheerfulness and general likeability offset the charges that gays and lesbians deserved to remain on the fringe of society, where opposition member Norman Jones is seen in the film at a 1985 public meeting calling for gays to “Go back to the sewers where you came from…as far as I’m concerned, you can stay in the gutter,” suggesting further that anyone who would befriend homosexuals was subject to contracting AIDS.  Even the Topps acknowledged that the hate tactics at the time were so out of line that the public was infuriorated by the general tone of hostility.  The Topps, on the other hand, are like the lost Trapp Family singers from THE SOUND OF MUSIC (1965) and revel in pastoral hillsides or pastures of healthy cows and horses, where they are at heart fairly mainstream farmgirls who have a special talent for singing and performing.
The twins topped off the decade with their 1989 Gypsy Caravan Tour, where they toured neighboring small towns while traveling in a small caravan on wheels pulled by a tractor, where at night in town halls they were met with swelling crowds, eventually leading to their own TV show where they introduced a variety of home grown characters, including cross-dressers performing comic skits.  While they are an odd choice to be the performers identified with a nation’s identity, their constantly upbeat, good natured humor apparently reflects that indomitable Kiwi spirit.  Their only apparent setback is when Jools develops breast cancer, forced on a heavy regimen of chemotherapy, losing most of her hair and energy for awhile, but never deterred.  There’s a beautiful anecdote about how when she returns home to her farm, the horses all came near her and helped nurse her back to good health by literally breathing life back into her.  Seen onstage years later after a successful recovery, she tells the story of how in her darkest hour she made her sister make one promise, that she’d sing her favorite song “My Pinto Pony and I” every day for the rest of her life.  Now that’s a song introduction guaranteed to bring the house down.  Still amazingly distinctive duet singers after 50 years, mostly the unflappable twins offer nostalgia-tinged music nowadays that has inspired them through the years.  While they’ve toured the world, they’ve never been interested in the limelight or fame, no limos, fancy hotels or major record contracts, preferring instead to remain committed to the authenticity of their natural roots, where they are right at home judging children’s sheep coloring contests at local county fairs.  While never getting introspective or delving that deeply into either sister, leaving out any hint that they were ever harassed, mistreated, or blacklisted, the film itself is more of a good will tour, an extension of home movies and concert footage, holding New Zealand’s box office record for a documentary.
Posted by Robert Kennedy at 10:45 AM