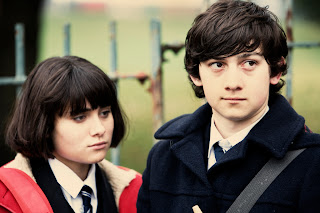 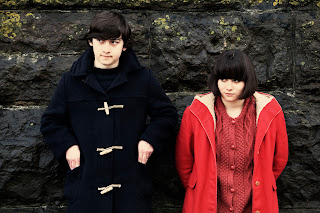 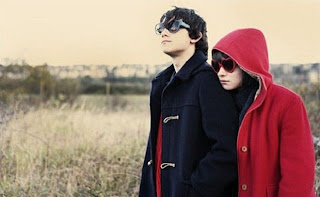 Taking your shirt off can lead to an atavistic response.        —Lloyd Tate (Noah Taylor)
Don’t get cocky.          —Jordana Bevan (Yasmin Paige)
Something of a deeply melancholic, male anguished, brooding teenage view of the Brave New World, as Oliver (Craig Roberts), a glum and morose but independently bright kid shares his daily experiences as he enters into his first relationship with the opposite sex, plunging ahead, as it were, without a clue how to use the rudder.  With parents who have the worst social skills of any couple in recent memory, the ever dour Noah Taylor and the usually perky Sally Hawkins, where they haven’t had sex in seven months, barely speak, and are on the verge of separation, which is happening simultaneously to his discovery of first love.  While the dialogue is above and beyond the teenage years, it hardly matters due to the continual self-deprecating humor where this friendless teen is as detached from the rest of the world of kids his age as he can get, where his lifeline is the equally moody and downbeat Jordana, Yasmin Paige, something of a revelation.  While this is pretty much seen as an all-in, all or nothing gamble, as if his entire future depends on it, this over-the-top drama is essential, as all teenagers feel they are drowning in a world of dysfunction and social misfits, which adds color and bit of flair to his otherwise humorless life.  Set in Wales, of all places, where there’s an introductory word of thanks showing gratitude to America for never having invaded the country, the gray, cloudy atmosphere adds to the glum reality of these kid’s lives.  Always dressed in heavy coats, Oliver tends to wear the same hang dog, sad sack expression on his face even in the best of times, as if he never actually trusts happiness, something that has occurred so infrequently in his life he’s not sure it actually exists.
Adding to the home drama is the presence of Paddy Considine, a psychically gifted, self-help guru with supposed mystical connections to a non-existent, feel good transcendental world, something of a hoax, a phony and a fraud, like the Patrick Swayze role in DONNIE DARKO (2001), but also an old flame of his mother who moves in next door.  When she starts taking an interest, with his Dad feebly pretending not to notice, Oliver quickly takes up the reigns as the aggressive interloper, a sleuth with intentions to drive them apart.  Simultaneous to his intoxicated love interest, where he’s literally out of his head, he’s also attempting to stay grounded by holding his parent’s together, something he can’t share with Jordana, as her parent’s problems trump his own.  While the film provides plenty of observation of small town life, people who keep to themselves and mind their own business, where over the years the repressed layers of holding it all in only leads to the inevitable medical breakdown, it also reveals an unusual tenderness from his parents, especially when they learn he has a girlfriend, which may be more significant than graduating high school or even going to college, as his self-absorbed life was leading them towards thoughts of a serial killer or a potentially abusing Catholic priest.  His father lovingly makes him a mixed tape of the songs that mattered to him when he fell in love, cleverly adding some breakup songs at the end, just in case.  Well, of course, these songs inevitably comprise the inner themes of the film, composed by Arctic Monkeys singer/songwriter Alex Turner, always seemingly playing in the background while he spends endless hours at the beach, bringing Jordana along to share his favorite spots, but oftentimes alone commiserating on life’s futility.
The couple share a kind of smart ass relationship, where their shrewd sensibility continues to uplift them from the mediocrity of the tedious world around them, even as it is heavily dosed in miserablism.  Not sure if this coded sarcasm is enough to survive, as when a few real life issues come their way, both are ill-prepared to handle what life offers, as they’ve spent the majority of their lives burrowing their heads in the sand.  Quirkiness is one thing, and this film has plenty of it which it handles with aplomb, but there’s also this thread of reality where unlike the separation issues in many teenage angst pictures, these kids still feel connected to their parents and are afraid to let go.  Oliver feels perfectly happy reading the dictionary, discovering new words, while Jordana seems to delight in lighting things on fire, where she constantly reigns in a noticeable aggressive streak.  Their passive-aggressive relationship does not exactly set the world on fire, as both barely ever reveal any feelings whatsoever, as they have to learn to survive in this closed-in world where no one shows emotions and all the town’s citizens are endlessly suffocating.  In this atmosphere, the arrogant and pompous Considine stands out, offering a delusional elixir of magical potions guaranteed to show you the light.  There’s a comfortable, nostalgia-tinged setting of the 1980’s, where kids pass notes instead of text, take Polaroid snapshots and keep diaries instead of posting messages on Facebook, where there’s an interesting Super 8 dream sequence, the use of cassette tapes, and even a few messages sent by a typewriter.  Despite the timelessness of this self-contained world, filled with irreverence and self-conscious mockery, there’s an unsentimentalized tone throughout, not even a trace of glitz or glamor, where these two kids are fairly grounded in their separate worlds.  The age-old boy/girl question lurking in every era is wondering if they will connect.   And here, the film does not disappoint.
Posted by Robert Kennedy at 6:21 PM