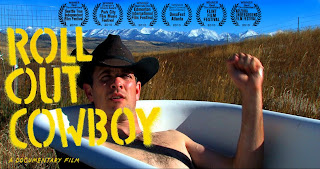 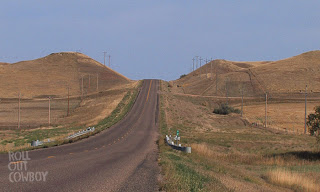 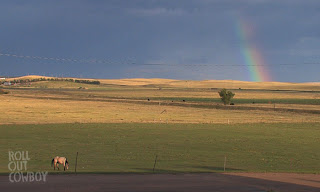 ROLL OUT, COWBOY                        B
USA  (75 mi)  2010  d:  Elizabeth Lawrence                 Official site
The question this film asks is whether the world is a better place with singing cowboys in it?  Popularized in the early B-movie westerns of the 1930’s and 40’s, cinema introduced Gene Autry to the world, and later Roy Rogers who also appeared on television with Dale Evans along with the Sons of the Pioneers.  While the initial novelty may have worn off through the years, this film documents a revival of sorts, showcasing the special talents of Chris “Sandman” Sand, a rapping cowboy influenced by the rap craze of the 80’s, a young man from Dunn Center, North Dakota, population 120, where he purchased his old broken down house for a cool $1000, as that’s all he had in his pocket at the time, stuck in the middle of the vast emptiness of the Great Plains where there are considerably more livestock animals than there are people.  Sandman acknowledges suffering from occasional bouts of depression, also that the previous two tenants of his home were musicians that committed suicide.  This seems to motivate him, however, serving notice to the world that he’s a force to be reckoned with.  A good natured, self effacing and completely unpretentious individual, Sandman often takes his talent on the road where he sings a combination of home grown personal ballads that he writes, which are more typically cowboy songs alongside rap and rhyme adventures that he learned to appreciate while living on an Indian Reservation as a teen in Western Montana in the 80’s.
Sandman’s personal hero is Will Rogers who he claims was a Cherokee Indian born in Oklahoma Indian Territory, dropping out of school to become a full time cowboy joining traveling Wild West shows, particularly known for his roping prowess using multiple lassos.  Eventually known more for his folksy style of wisdom, humor, and social commentary, Sandman tries to emulate Rogers’ warm, down home influence across the national landscape.  What becomes obvious to the viewer, however, is the stark emptiness of most of the places Sandman plays, even when booked in urban cities, where the venues might more commonly be called dives or holes.  But this in no way diminishes his skill level or the enthusiasm he generates, mostly positive vibes from his genuine personality that rubs off on other people.  The film documents a road tour he made in the year leading up to Obama’s election in 2008, where he wanted to be part of a movement where he felt the country coming together.  History shows the post-Obama era of politics to be filled with even more divisiveness and rancor than anyone could have predicted, which gives this film the dated appearance of a time capsule, but it hardly matters, as Sandman fills the screen with the infectious spirit of his own upbeat outlook, as he wants the world to get along and with his music hopes to do his little part in bringing everyone closer together.
What feels unique in this small, upbeat, and more often than not delightful film is authentic showcasing of people living on the fringe, both rural and in the cities, who aren’t that far removed from homeless people, as they are just barely scraping by.  It’s reminiscent of the remaining elements of the post 60’s counter culture, where Sandman has a much more evolved tolerance for racial and sexual diversity than people that normally live in the wide open spaces of the West, who tend to be more elderly and hard core conservative.  Sandman’s following includes an idealistic youth movement that sees a brighter day ahead, who see him on the vanguard of a coming social change, as his songs advocate a different kind of world than the one we live in, a kinder, gentler place where despite obvious differences, people have fewer insurmountable obstacles and almost no one uses confrontational tactics.  Messages tend to be artistically expressed in songs or poetry instead of political demonstrations which they have little use for.  Sandman spends a good deal of his time holed up in the remote isolation of his rural home, where there are few neighbors nearby, but instead hills and vast plateaus that extend to the far reaching horizons, where a sunset may pass for his weekly social communion.  Living with this degree of loneliness built into his life, it comes as no surprise that his songs are so intensely personal, reflecting the spare reveries of another passing day living alone, where friends and his connection to the world seem to have more nobler, far reaching ramifications.  Skillfully directed by a Columbia College graduate who accentuates distances and a notable emotional sparseness, unfortunately few will ever see or hear Sandman, but he’s the genuine article.
Posted by Robert Kennedy at 12:25 AM