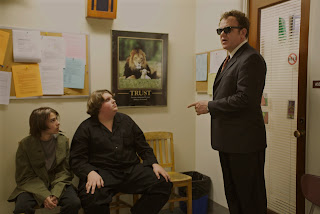 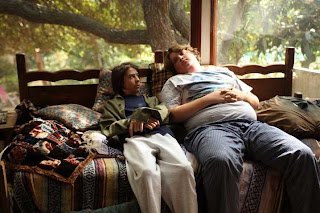 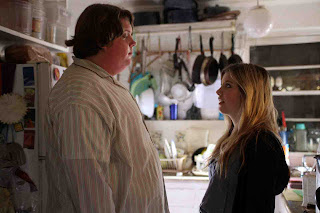 TERRI                     B
USA  (105 mi)  2011  d:  Azazel Jacobs
The director is the son of experimental filmmaker Ken Jacobs, but zeroes in on a fairly likeable Sundance indie feel with this film about a teenage social outcast Terri (Jacob Wysocki) who is continually teased about his enormous size.  Little is made of the fact that he also wears pajamas around town (“because they fit”) as well as to public high school without anyone raising objection, which by itself suggests a certain tolerance for the character, which just doesn’t have the feel of credibility, as kids themselves would likely raise an uproar about broadening the acceptable dress code standards for one kid while adults would be sending him off to see the shrink.  Instead the film focuses in on his gently attentive daily routines, where he lives with his eccentric and senile uncle, Uncle James (Creed Bratton), who has an extensive collection of books and old record albums, occasionally showing the clarity to impressively play the piano, much to the delight of Terri, who is something of a quiet recluse himself, used to taking care of him, making sure he takes his medicine, watching his moods and his behavior so he doesn’t do something he’ll regret, and also putting him to bed at night.  His uncle is friendly enough, but has a tendency to easily forget things.  With the film opening on their morning routine, making sure his uncle has what he needs before he sets out for school, it’s easy to see why Terri has a history of arriving late, which gets him sent to the Principal’s office, none other than the always offbeat John C. Reilly as Mr. Fitzgerald, who welcomes him as a buddy, suggesting they meet regularly just to see how things are going.
With Mr. Fitzgerald, one is never sure who’s weirder, him or the misfit kids that are sent to see him, which includes Terri, though he soon comes to question why he has been included with this group of outcasts.  Fitzgerald appears to be sincere, but he is clearly unlike other school authority figures who would just as soon banish Terri from their classrooms or gymnasiums than have to look at him, as his unmotivated mild manner and seeming disinterest in school alarms them, as they think he’s just a big fat oaf, not bothering to see beyond that blank expression on his face.  Terri is unusually clever, however, as he spends much of his time observing others as they continually try to annoy him or ignore him, developing a kind of third eye, sensing what’s going on around him even as he withdraws socially.  What’s soon apparent is how the film quietly becomes fascinated exclusively with unconventional characters, where outsiderism becomes the norm, as there are few glimpses of anything resembling mainstream behavior.  Instead what we see touches on the bizarre without ever actually going there, never fully exploring the ramifications.  Outside of Terri, few other characters are fully explored, including Fitzgerald, as they are only seen within the context of their relations with Terri.  One of the other misfit kids, Chad (Bridger Zadina), an angry kid who continually pulls his own hair out and is likely to do just about anything, having no cautionary feelings, attempts to befriend Terri, but the closeness catches him offguard and comes as something of a surprise, like why me? —something he’s perhaps not expecting or even ready for yet.

The heart of the film changes when Terri observes an attractive girl, Heather (Olivia Crocicchia), being taken advantage of sexually by a boy appropriately enough named Dirty Jack (Justin Prentice) during Home Economics, which quickly becomes the subject of unstoppable school rumors, where the girl is about to be expelled from school until Terri speaks up to the Principal, claiming it happened against her wishes, changing the entire perspective of the event.  This sequence also changes the tone of the film, as the focus is finally on someone other than Terri, as the entire student body turns against the girl, except Terri, becoming even more ostracized than the previously identified group of misfits.  This leads to a friendship, of sorts, which only proceeds in the most offbeat path imaginable, where for a moment, Terri, Heather, and Chad become a psychologically demented, John Hughes style BREAKFAST CLUB (1985), where they have to decide what to do when they have too much time on their hands.  One thing is for certain, and that is the languid pace of Terri’s unhurried life, which allows this film to develop slowly, accumulating pertinent details and developing character traits, all of which combine to paint an unusual portrait of teenage alienation when seen under this probing miscroscopic scrutiny, where life on the edges stops feeling so miserablist and alone, where shared experiences, even the most atypical and bizarre, make these kids feel less like the monsters they have been portrayed as and more like something closer to their own skin.  This film, perhaps overly optimistic and upbeat, has a way of taking the teenage spirit of rebellion and insurrection and somehow offering it a safe place in this world, where, in reality, one is not so assured that safe havens like this exist outside the realm of the imagination.
Posted by Robert Kennedy at 12:46 AM