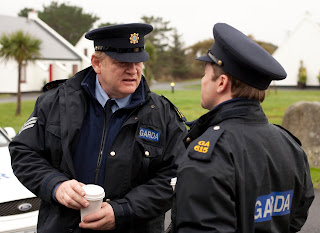 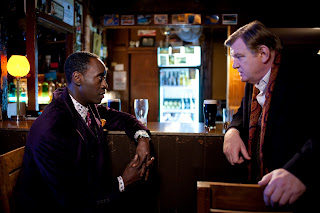 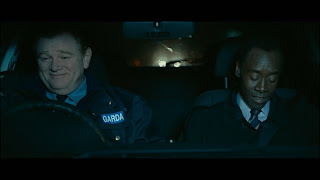 THE GUARD                          B+
Ireland  (96 mi)  2011  ‘Scope  d:  John Michael McDonagh
Why don’t you fuck off to America with your Barack O’Fucking Bama?
—Sergeant Gerry Boyle (Brendan Gleeson)
Written and directed by the brother of Martin McDonagh (one of the film’s producers), who wrote and directed the hitman black comedy IN BRUGES (2008), which made fun of the boring Belgium city of Bruges as a ghost town where absolutely nothing happens, both starring Brendan Gleeson, though here he single handedly carries the film in a wickedly comic performance that is nothing less than brilliant, even rivaling the British film THE TRIP (2011) as the funniest movie of the year.  While THE TRIP is wildly improvisational, relying on rival comics providing a steady stream of comic impressions, each trying to outdo the other, this film has hilariously perceptive writing, featuring an Irish cop, Sergeant Gerry Boyle (Gleeson), in a Gaelic-speaking region of Ireland poking fun at a black American FBI agent (Don Cheadle) flown in, supposedly an expert on international drug trafficking, continually pestering him with racial humor that also undercuts the so-called competency of American law enforcement, making this among the funniest and most socially relevant uses of humor seen in any recent movie.  “I'm Irish, sir, racism is a part of me culture.”  It’s funny, for a change, to see how the rest of the world amusingly views America as a cowboy culture that continually shoots itself in the foot, where our blunders are world renown, yet we continually perceive ourselves as experts.  American films rarely poke fun at our own ineptitude, as this would be seen as unpatriotic and anti-American.  But in an Irish film, showing a traditional, old-fashioned cop that except for his proclivity for profanity might be a brethren to Peter Falk’s Columbo, continually expressing himself with subversive humor in that thick Irish brogue, Gleeson gives one of the best performances of the year.
Foregoing the cheaper video route, this was shot on real film by Larry Smith, who worked on three Kubrick films, Barry Lyndon (chief electrician), The Shining (gaffer), and Eyes Wide Shut (lighting cameraman).  Somebody obviously paid attention, giving a luscious texture to the constant and steady stream of overcast gray that seems to perpetually hover over Ireland, shot mostly in Galway, suggesting a smaller rural location that culturally takes its pot shots at the ineptitude expected from the urban Irish capital of Dublin.  One of the more off the wall sequences even pokes fun of the IRA, finding little gems of humor across both sides of the ocean.  While the dialogue may need subtitling, as much of the humor is missed on an American audience simply due to the foreign accent, the tone of the film is a mixture of sharp, in-your-face humor, a showcase for strangely original side characters, and some refreshingly poignant, quiet intimacy between several of the characters, all of whom are connected in some way to Boyle, whose actions confound the drug smugglers, as he doesn’t act in the predictable manner they have come to expect.  That’s putting it mildly, as the guy doesn’t get riled, shows little fear, will stand up to anyone, face to face, and is the kind of down-to-earth guy you’d want to share a drink with, as that’s really when he’s in his element.  When he visits his terminally ill mother (Fionnula Flanagan) in a senior home, where everyone around her is just as old and sick as she is (how depressing!), their moments together are priceless, sharing a flask that he brings along, altering their memories to brighten up her day, where they even have a crack up moment giggling in church, where he wonders what she’s done at her age that needs to be confessed.
But it’s the sudden arrival of bad guys in the vicinity that alters the landscape, that brings over the heralded “Yank,” and where dead bodies start turning up with regularity.  When we meet the trio of outlaws in a car, the ringleader Liam Cunningham is reading Schopenhauer in the back seat, while the nervous sociopath driver David Wilmot is competing with hitman Mark Strong for who can come up with the most obscure Nietzschean quote.  This is like something seen in a Hal Hartley movie, as is the very clever use of music, the Sergio Leone style score written by Calexico, a Mexican mariachi/Tejano band, while choice selections include the Bobbie Gentry ballad “Ode to Billie Joe,” which is heard playing in a diner while Gleeson and Cunningham have a face to face, like Pacino and De Niro in Michael Mann’s HEAT (1995), each conjuring up thoughts about what might have been thrown off the Tallahatchie bridge.  Reminiscent of the rich and detailed atmospheric mood established in Bill Forsyth’s LOCAL HERO (1983), the shoot ‘em up intrigue that develops from the inevitable attempt to stop the drug deal never outshines the attention to small details in this clever indie film, made for one-third the cost of IN BRUGES, where the authenticity of the characters really shines through, especially in the bar scenes, where musicians might be huddled off in the corner playing quietly, where the customers can actually hear one another, establish a dialogue and a familiar relationship, while developing that amicable jocular tone.  John Denver singing “Leaving On a Jet Plane” couldn’t be more poignant in its use here, as this film has a dynamite ending, not overpowering, as this remains a small film, but clever all the way through to the end, allowing some of the film’s smaller characters to shine.
Posted by Robert Kennedy at 12:52 AM