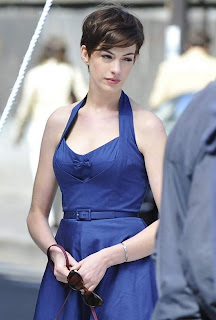 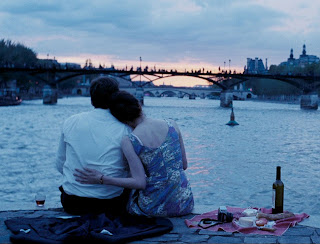 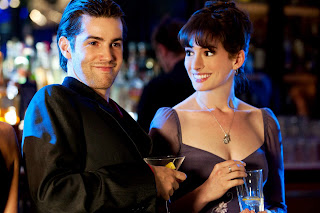 ONE DAY                   C-
USA  (107 mi)  2011  ‘Scope  d:  Lone Scherfig
This is a case of an actress not being compelling enough to carry a movie, where she’s unfortunately in over her head, where poor casting ultimately brings down the entire production.  Danish director Lone Scherfig is known for intelligent writing and directing great ensemble casts of relatively unknown actors, all of whom give terrific performances, such as the two excellent Danish films, ITALIAN FOR BEGINNERS (2000) and WILBUR WANTS TO KILL HIMSELF (2002), both introducing a wry wit and quirky performances, veering between romanticism and dark comedy.  AN EDUCATION (2009) was shot in England, saved by an outstanding performance by Carey Mulligan, while this is an American film also shot in England.  Both of the later films seem to suffer from culture shock, using someone else’s material for the first time, which lacks the personal charm and intimacy of her earlier works, but one really has to scratch their head about the choice of actress Anne Hathaway who is annoying and unlikeable in every sense of the word—not good in a romantic drama.  Instead of the quietly repressed yet somewhat Bohemian creature she pretends to be, she seems hopelessly lost, supposedly caught up in a whirlwind of romance, yet whose every last nerve seems to grate on the audience.  While the syrupy music by Rachel Portman may be appropriate for an epic of some kind, along with the sweeping, panoramic ‘Scope cinematography by Benoît Delhomme, but this grandiose style falls flat when the central characters can’t hold the audience’s attention.  One problem, no doubt, is they are sloshed throughout the entire film until the final reel.  In literally every scene together it is accompanied by excessive drinking, the kind many will find simply obnoxious and boring—hardly memorable.
There’s little evidence of Scherfig’s tight and compact structure, instead everything is enlarged, sentimentalized, and greatly exaggerated, losing whatever wit and appeal this film was going for, as few, if any characters stand out.  Hathaway plays Emma, who feels like an American overseas but she’s supposedly British, while Jim Sturgess, sensational in ACROSS THE UNIVERSE (2007), plays Dexter.  Both celebrate their graduation from Edinburgh University in an all night, drunken evening, where they end up in bed while barely knowing each other, yet become best friends for the rest of their lives, where the story returns to the anniversary date of their first night together for the next 20 years.  This is not BEFORE SUNSET (2004), and despite the continuing lifelong conversations together, the dialogue, oftentimes uncomfortably overlapping, lacks all attempts at romanticism, as there is never a sense of urgency in either character, desperation maybe, but never love.  Instead we witness the two of them throw away their lives on missed opportunities, each following a different direction, constantly missing what they ultimately need in life while pretending they are happy, growing farther and farther apart even as they continue their lifelong friendship.  Dexter is something of a spoiled, self-indulgent ladies man, a child of privilege whose recklessness seems to know no bounds, while Emma is a closeted writer, a woman who keeps her thoughts to herself, never managing to get her life on track, settling for small change jobs that offer no satisfaction whatsoever.  Her dreamy idealization of Dexter seems largely an infantile fantasy, as the real thing is incapable of commitment or taking responsibility, but is largely a lush.
Sturgess does indeed look terrific throughout the movie, but the way he continually drowns in his own personal sorrows never once becomes brooding (Danish melancholic style) or interesting.  Patricia Clarkson plays his more stoically reserved mother, perhaps the only honest character in the entire film, voicing her disappointment in him to his face, but unfortunately she has too little screen time.  Despite the numerical countdown of the years, there is very little evidence of the passing of time except through the changing hairstyles and fashion, with the exception of the exquisite use of the song:  Corona - Rhythm of the Night - YouTube (3:49), also used in the Claire Denis film BEAU TRAVAIL (1999), which reflects Dexter’s colorful immersion into the Me Generation, complete with rhapsodic indulgences into women, drugs and alcohol.  Emma, on the other hand, has friendships, but little romance, finding the wrong guy in Ian (Rafe Spall), a nice enough guy, but not the brightest bulb in the box, a guy who wants to be so much more than he really is, becoming one of her biggest disappointments.  In this way, both characters feel like they’re attempting to fight their way out of a paper bag, each an expression of failure and futility, where the audience simply doesn’t have the patience to put up with their meandering mediocrity.  There’s simply nothing about either one of them that compels us to watch the screen, instead we are treated to splendid views of Edinburgh, London, and Paris, each given the travelogue style tourist’s view.  When the settings are the most remarkable element of the picture, something is obviously lacking.  In this case it’s chemistry, as there’s never any onscreen combustion.

By the way, one thing must be said for this picture, as evidenced from one of the opening shots, the motion picture industry should remember the standard cyclist’s credo:  In today’s world anyone who rides a bike should be responsible enough to wear a helmet. They should be as commonplace as seat belts in motor vehicles, as they save lives.
Posted by Robert Kennedy at 3:47 PM