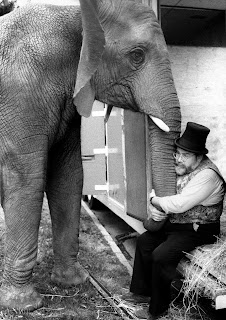 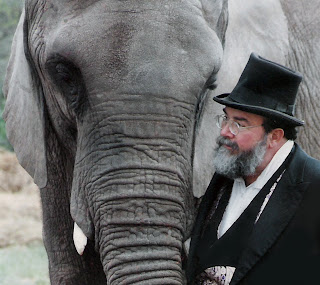 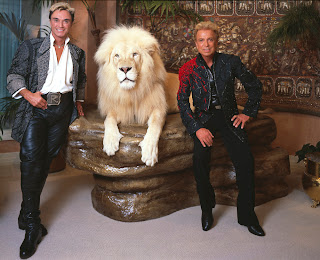 Perhaps we can blame it all on BORN FREE (1966), an adaptation of Joy Adamson's 1960 non-fictional book about raising orphaned lion cubs in Kenya, which may be the first time viewers saw, National Geographic style, wild animals being raised as pets by humans, literally hugging and petting them well into adulthood, getting closer than humans should to wild animals that in a single swipe are capable of mutilating people, including their trainers.  Or more appropriately, what about Jack London and his popular adventure stories Call of the Wild, or White Fang, providing romantic images idealizing animals in the wild?  More recently, in 2003, who can forget the horrible tragedy of Siegfried & Roy, renowned tiger trainers who took their act to Vegas, billing themselves as “Masters of the Impossible,” so sure of themselves that these animals would do them no harm until one of them, an animal trained since he was a cub who had been performing together for six years, suddenly turned on Roy, going for his neck, causing critical neck, head, and brain damage, suffering a stroke and partial paralysis, but fortunately he survived.  Then of course there was FREE WILLY (1993), earning over $150 million dollars, followed by several sequels, an idealized children’s story about returning a performing Sea World Orca whale named Willy back into the ocean.  Compare that to Dawn Brancheau, the Florida Sea World trainer a year ago that was drowned as she was pulled underwater by an Orca killer whale named Tillikum, who has now been involved in the deaths of three persons, but is still performing.  Lest we forget these are wild animals, even when they act tame.
You won’t find any of that in this film, or the beguiling face of Reese Witherspoon in WATER FOR ELEPHANTS (2011) for that matter, which instead introduces us to David Balding, a likeable enough portly gentleman running a circus in St. Louis, where the star of the show is Flora, a 10,000 pound African elephant that he has raised since she was an infant, developing a personal bond that he believes is much like raising his own daughter.  We see him walking the animal back to his living quarters afterwards, where the police literally stop traffic so Balding can walk him down the middle of the street which certainly invites gawkers and staring onlookers.  He talks to her, pets her, has her do tricks for him, and rewards her with treats when she obeys.  Kids find this kind of thing astonishing at the circus, but after more than a decade performing together, Balding notices the animal has lost its love for performing, leaving him in a quandary—what to do about his animal?  While elephants live for half a century or more, Balding is nearing retirement age, feeling the animal will likely outlive him, so he starts searching for an environment with other elephants, which are largely social animals, hoping to find an elephant sanctuary in Africa.  But despite his best intentions, it’s difficult to find a good home for such a massive animal, where she ends up in a Miami Zoo temporarily until he can find a better alternative, where the intrigue is how Flora will get along with the other elephants, or even if she’ll remember how to be an elephant.  The footage of elephants that we see is quite appealing, where they seem to connect, but we hear later that she acts out and misbehaves, becoming quite aggressive.  Eventually Balding finds an elephant sanctuary in Tennessee which has 2 other African elephants, a jungle like tree canopy and plenty of room to roam, which sounds ideal, but she misbehaves there as well, mangling a steel fortified fence, leading to involuntary isolation.

But the story soon turns away from Flora, the star of the show, taking an intimate view of the aging Balding instead, who suffers from declining health and now sits in a wheelchair and has difficulty walking, but becomes quite miffed when the sanctuary changes the rules of the game and won’t let him visit his elephant anymore, as they had initially promised, claiming she’s suffering from Post Traumatic Stress Disorder, most likely from witnessing the slaughter of her own mother and her herd by poachers when she was initially captured in Africa, leaving her an orphan, developing separation and abandonment issues which they feel is exacerbated by his human presence, thinking instead that she needs to bond with the other elephants.  This does seem like an unsubstantiated and rather pat diagnosis, not shared by the one person in the film who is seen in the most positive and objective light, the elephant trainer at the Pittsburgh Zoo, a man who refused to utilize the harsh and traditionally barbaric methods of inflicting pain to insure dominance during training, where the tagline for the movie turns into:  Will Balding be able to see his elephant again before he dies?— turning this into a rather maudlin subject.
While the tendency to humanize these animals may be laudable in some circles, making them cute and cuddly, where they resemble children’s stories or fairy tale worlds where humans and wild animals readily mix in a peaceful coexistence, it also calls into question the issue of animal rights, as unless they are injured or harmed, which is how so many animals end up in zoos, aren’t they better off remaining in the wild?  This reminds us how poorly animals in the zoos and the circus are treated, as so many seem to be locked up in cages, hardly the freedom they would otherwise be accustomed to.  The same can be said for performing dolphins, one of the highlights at Sea World, as their synchronized swimming takes one’s breath away, but Richard O'Barry, from the excellent documentary THE COVE (2009), who actually captured and trained the animals used for the Flipper TV Show (1964 – 67), calls into question his own culpability, claiming the show actually turned the dolphins into friendly “aquatic Lassies.”  Going further, he indicates these captive animals perform only because they are terrified, as they are rewarded with food only if they do, becoming one of the leading advocates “against” capturing dolphins.  By the end of this film, however, without really developing the arguments raised, there is too little known about Flora and the Pittsburgh Zoo, too much about Balding, where the word unlucky feels much more appropriate for the film’s title.

Post Script:  In perhaps the ultimate irony, Carol Buckley, the owner and founder of the non for profit Tennessee elephant sanctuary, the one who barred David Balding from ever seeing Flora again due to her belief that it places too much potential trauma on the elephant, as it forces her to relive her original trauma when she does, has been barred from seeing her own elephants, except by appointment, asked to move off the grounds of the sanctuary, and kicked off the sanctuary board by the Board of Directors (Buckley was fired by the organization’s board in March 2010), largely due to her dictatorial management style.  Buckley is suing the Board to have her own rights reinstated (Tennessee Elephant Sanctuary in Custody Fight).  Balding’s response, now 73, “She created this place.  But talk about karma.”
Posted by Robert Kennedy at 12:35 AM