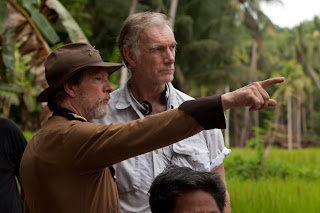 Sayles on the set with Chris Cooper 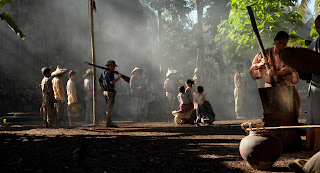 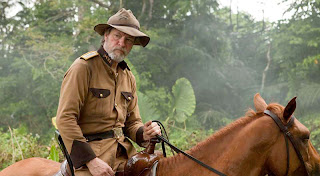 AMIGO                       C+
USA  (128 mi)  2010  d:  John Sayles
Sayles takes a stab at revisionist history in the American occupation of the Philippines from 1900 to 1902, but unlike his much superior MEN WITH GUNS (1997), a Sayles film that poetically examines the history of South America, this film is so uneven that it loses what it's so passionate about.  Shot in the Philippines, using a largely non-professional local cast speaking Tagalog, Sayles plunges ahead with a muddled effort that spends too much time attempting to bridge the gap between languages, where often both are being spoken at the same time, which along with subtitles is very confusing to the viewer, made worse by a Catholic missionary priest who translates everything through the views of the church. Instead of simplifying it all for the intended audience, Sayles only makes it more complicated, where the point about American soldiers insisting to speak English to people who have little capacity to understand is repeatedly drummed into the story.  What this film resembles is Kevin Costner’s DANCES WITH WOLVES (1990), which over sympathizes with the Indians, envisioning how a trained military captain could embrace the Indian culture as part of his mission instead of savagely attacking them into submission, which became the prevailing military order of the post Civil War era.  Similarly, this film goes to great lengths to humanize the Philippine community, despite the expressed vulgar viewpoints of the individual soldiers who continue to dismiss them as dark skinned and racially inferior.  Fresh off the Indian wars, many American soldiers were sent to the Philippines in an attempt to occupy the nation, an obvious parallel to Iraq and Afghanistan, where after Spain ceded the Philippines to the United States, the government belief under President Teddy Roosevelt was that it was an American duty and priority to bring democracy and a civilized government to inferior nations, where annexation was key, protecting the military and economic interests which would likely fall under the control of Japan or Germany if the U.S. didn’t intervene.  Rather than provide an objective view, however, Sayle’s dogmatic script is too preachy, where his aims undermine any sense of developing drama.
The film has its moments, however, where the relative calm in the remote village of San Isidro is broken by the arrival of American soldiers.  What they inherit is mostly a town of women and children along with a handful of male elders, as all the rest of the able bodied men escape into the heavily forested mountains where they lead occasional guerilla raids.  Like the American Civil War, this act pits brother against brother, where Rafael (Joel Torre) is the town leader who advocates peace and attempts to befriend the Americans while his brother Simon (Ronnie Lazaro) is the leader of the insurrectionists, which includes Rafael’s teenage son.  Led by American Lieutenant Compton (Garrett Dillahunt), a former architect, a small group of soldiers is left behind to establish a garrison in a rural outpost, where Sayles establishes a daily rhythm of life where each side cautiously but suspiciously attempts to live alongside one other, bridged by the biased, morally judgmental interpretation service of the Spanish Catholic priest (Yul Vazquez), who only exacerbates the pervasive mood of mistrust.  Only the women and children show an undivided, ritualistic need for the church, as this is all they’ve known, where the church’s teachings have provided the only semblance of education in the region due to the absence of schools, where all the adults are illiterate.  The loving marital relationship of Rafael and his church adhering wife Corazon (Rio Locsin) establishes an existing presence of harmony in Philippine relations, a harmony all but shattered by the American presence that blames Rafael for anything that goes wrong, punishing him with slave labor, where he is repeatedly jailed and continually turned into an example by the military superiors.
The quiet, wordless scenes are the best, an elderly man playing classical guitar, languorous sequences of idleness from the neverending rain, planting rice in the muddy fields, a fiesta, a funeral ceremony, the community coming together to build a house, much like the Amish barn building sequence in WITNESS (1985), which along with some excellent choices of music offer inspirational moments.  The jovial interrelations between the old time village friends are deftly handled, as their playful spirit is a marked contrast against the vile behavior of the American troops, with the exception of one young trooper who develops a crush on one of the attractive young girls.  Chris Cooper enters the picture as an American Colonel who refuses to accept anything less than results, implementing the military view of imposed atrocities in order to send a vicious message to the villagers.  As far as history, the film doesn’t go far enough, as the Americans enacted the same scorched earth policy that it had shown to American Indians, using military superiority to annihilate indigenous Philippine populations, forcing them into crowded concentration camps where the stench and spread of contagious disease wiped out large numbers of civilians, while also inflicting brutal questioning, torture, and on the spot executions.  Though he only concentrates on one rural village, Sayles barely touches on these issues and instead suggests there are differences in military perceptions between those living with the natives and those prepared for an all out invasion.  In the eyes of the invaders, the life of a Philippino is demonized and has no value whatsoever, which only proves they have no business inflicting such horrors into the lives of cultures so radically different than their own which they really have little interest in understanding anyway.  History is filled with ventures just such as this, but Sayles fails to add anything new to this argument except to express his longstanding humanistic views that all men are brothers.
Posted by Robert Kennedy at 1:19 AM