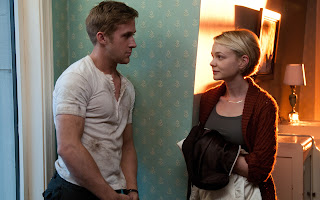 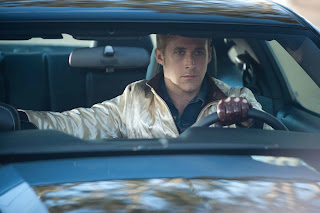 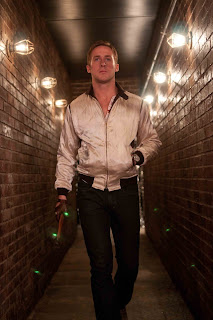 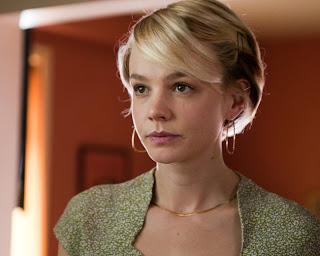 Danish director Nicolas Winding Refn, winner of Best Director for this film at Cannes, takes a break from his more violently exotic PUSHER Trilogy (1996 – 2005) and takes a stab at an American mixture of commercial and art motif with this homage to the existential car films of the 1970’s like VANISHING POINT and TWO-LANE BLACKTOP (both 1971), or Walter Hill’s THE DRIVER (1978), where what each have in common with this film are the extraordinary specialized skills of the mechanic and guy behind the wheel, where the open road seen ahead is the only freedom he’ll ever know.  It’s also impossible not to think of Steve McQueen in BULLIT (1968), the personification of cool behind the wheel, transplanted to Ryan Gosling here (originally slated for Hugh Jackman), known only as the Driver, a wordless guy with steely nerves, a Zen calmness, but also a capability for savage violence.  The love affair with the automobile is established right away as the Driver gets a couple of crooks out of a tough jam, evading the police with an eerie kind of expertise, a brilliant sequence that sets the tone for the rest of the movie, opening a window into his world, luring the audience into a fascination with his profession.   The real film this resembles, however, is To Live and Die in LA (1985), as both show a seethingly corrupt film noir underworld in the city of Angels, both expertly establish a high throttle tension throughout, both straddle the line between law abiding and law breaking, and both have inspired musical soundtracks, where Cliff Martinez creates a Tangerine Dream-style synth score, featuring a wall to wall, techno-pop, sound effect of angelic romantic choruses that couldn’t be more hypnotically appealing.  The artistic design of the film has a sleek, classical elegance, where the constantly moving digital cameras from cinematographer Newton Thomas Sigel offer the viewer a roller coaster ride, where the pauses allow you a chance to look around for a moment before they start rolling again. The mounting tension is unsurpassed in any other recent film, creating a palm sweating, edge-of-your-seat visceral experience that is nothing less than superb.  That said, the storyline by Hossein Amini adapting the James Sallis novella here, who also wrote the superb Thomas Hardy gut-wrenching movie adaptation of Michael Winterbottom’s JUDE (1996), feels very sleight in comparison.

Gosling’s Driver establishes the interior tone behind the wheel, a MAD MAX (1979) style lone wolf on the prowl in the wasteland of an urban jungle, a guy that doesn’t set his heights too high, but his expertise as a professional stunt driver for the movies is so noteworthy that it’s impossible for others not to notice.  He moonlights as a driver for hire, an escape artist, no questions asked, no talking to the cops, just a guy who excels behind the wheel.  "I drive.  That's all I do."  The titillated novelty here is the barebones thread of a budding romance with one of his neighbors, Carey Mulligan as Irene, a single mom raising her young son alone while his dad is in prison.  Their first date is a return road trip to the cement canal dry riverbed waterways of a chase sequence in To Live and Die in LA, this time seen through a much softer, romantic prism, a gentle and poetic moment that feels like an oasis in the desert, as much of the rest of the film is filled with bloodlust and revenge.  Despite the hyper violent edge, the actual moments of screen time violence are far less than most all Hollywood thrillers, amounting to just a few minutes of the entire film, but the extreme stylization is so enigmatic that the effect is more memorable and long-lasting.  This is an inevitable heist gone wrong film, where the Driver just happens to be in the wrong place at the wrong time, as the people he’s mixed up with don’t realize they’re stealing the mob’s money, which means there’s hell to pay.  The vicious turn of events are brilliantly executed, where Gosling is mesmerizing with his cool demeanor, rising above his double-crossing cohorts with minimal sweat, or so it seems, able to stare death in the face even as he’s being targeted.  The quick decisive action of the mob is alarming, showing extreme brutality, but Gosling keeps his wits about him, where one wonders just what kind of trouble he may have faced before, questions that remain unanswered.

When did Albert Brooks, creator of his own strange and quirky comedies of the 80’s and 90’s and the voice of Nemo’s neurotic Dad in Disney’s FINDING NEMO (2003), become a gangland boss?  Did we miss something?  Here’s a guy that cast Debbie Reynolds as his own mom in MOTHER (1996), for Christ’s sake, so when did this transition occur?  Was it the slimy character he played in Soderbergh’s OUT OF SIGHT (1998), the guy that risked his girl friend’s life rather than give up the hidden diamonds?  Was it his role as a Dick Cheney-style government bureaucrat gone mad in THE SIMPSON’S MOVIE (2007)?  Whatever happened from his days at Saturday Night Live, the guy now plays a terrific heavy, as he’s the face of the mob boss here, given some highly colorful, profanity laden dialogue that seems to resurrect his memory as a once proficient hit man rising up the ranks, where the guy loves to be warm and fuzzy, but can’t afford mistakes or any loose ends in his line of business, which makes his end of it very personal.  The film is very much style over substance, despite the terrific performances all around, as there’s little to no social commentary and an ambiguous moral dilemma that has little to do with anyone's life.  It’s the love element that tips the audience in favor of the Driver, as he’s cool and collected but falls for the girl, even as her life gets exasperatingly complicated when her husband is released from prison.  Still, the inevitable showdown is between two guys outside the reach of the law, both brutally efficient, where no one can really call either one a winner, as there’s too much psychological baggage to carry.  Refn uses a very compact, highly constricted style that energizes his work, creating an extremely taut and gripping drama, something one movie executive character ironically describes in the Sallis book as:  “Think Virginia Woolf with dead bodies and car chases.”
Posted by Robert Kennedy at 1:37 AM