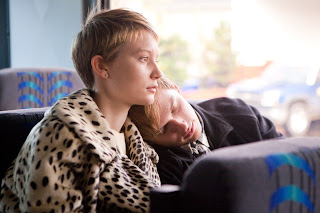 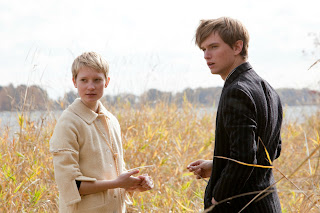 RESTLESS                  B
USA  (95 mi)  2011  d:  Gus van Sant
Not sure why this film has received some of the most blisteringly negative reviews in van Sant’s career, as while it’s not one of his best, it’s easily not one of his worst either.  The film is a love poem on the subject of death, coming after the death of Dennis Hopper, to whom the film is dedicated and the father of Henry Hopper who plays Enoch, the lead teenage character who is filled with his own haunting personal reverberations from the loss of his parents in a tragic car accident, while  is Annabel, a terminally ill cancer patient with only three months to live.  These two meet while attending funerals for complete strangers, where they oddly find they have something in common before they really have a chance to get to know one another.  This downbeat theme of finality underlines the rest of the film, but not in any morose sense, like we see on Hallmark card movies of the week all the time, filled with wretched excess.  Instead it adds a tone of fragility and tenderness, where these two damaged souls have no one else on the planet they can relate to, where they can act like teenagers, get a bit goofy, and they’re not afraid to make fun of themselves, always fully aware of their tragic situation.  While Annabel is facing the inevitability of a rapidly approaching death, Enoch has already survived the experience, where he was in a coma for months after being pronounced dead for a few minutes.  What he recalls is not a desire to move toward the light, but a complete emptiness, where his entire world was reduced to nothing.
Morbidity is not a subject to send people away in droves, as Annabel may be a stand-in for Annabel Lee, the last complete poem of Edgar Allen Poe from 1849 that explores the theme of the death of a beautiful young woman, where the narrator expresses an intense feeling of longing for her even after her death, where they remain forever united in their hearts.  This expresses the tone of the film, as there’s a haunting feeling of everafter, beautifully expressed by a ghost seen only by Enoch after his coma, Hiroshi (Ryo Kase), a Japanese kamikaze pilot from WW II who has befriended him, as he’s someone who can actually feel the depths of Enoch’s loss, having sacrificed his life during the war.  There’s a zany conversation when Annabel actually tries to have a conversation, through Enoch, with his invisible ghost, which gets rather tricky, as Enoch has never had to share or explain his friend to anyone.  Annabel, on the other hand, knows what it’s like to spend time in the cancer wing of the hospital, people given no time to live, where the rest of the world instantly avoids them, as if they’re already invisible.  She’s a brilliant young girl with a thirst and unquenchable spirit for life along with a passion for Darwin and the science of water birds, as they can go places none of the other air and land birds can reach, adding a special dimension to their lives. The two gravitate towards one another instantly, where the dark divide that separates them from the rest of the world is instantly recognizable, as both appear haunted by the specter of death.
Without ever expressing their pain, they can’t help but enjoy one another’s company, where their offbeat humor and gentle nature is expressed through a kind of fantasia, where her upbeat mood is as close to happy as she’s ever been in her life, which is exactly how one would like to spend their final days.  Many may think this goes over the edge into the surreal, as their perfect world couldn’t possibly be all that perfect.  Perhaps their most special moment together feels highly illusory, like a dream fantasy, yet this expression of rare intimacy is aided by the use of a flashlight, which added to their continually moving faces in close up changes the focus onscreen, where the image literally dissolves and melds into one another, a beautiful expression of their souls becoming one.  Of course, the balloon eventually bursts from an unseen force, as reality keeps pushing itself into their world, breaking down the walls of make believe, until eventually they are flooded by forces beyond their control.  What’s especially effective is that their lives do not become fodder for some melodramatic moment sure to evoke tears, as this character driven film is more sparing than that, where they each have to fight their inner demons, some not so successfully, but the bottom line is that until she dies they still have each other.  This is beautifully expressed, and not with tragic overtones, but with a kind of irreverent spit in the eye of death.  Don’t underestimate the significance of Hiroshi, a guy with powerful instincts and a pervasive spirit of humanity, who acts as a guide through this complicated and interwoven blend of different worlds, like a seeing eye dog for humans too scarred and blind to see.
Posted by Robert Kennedy at 11:46 PM