Resurrect Dead: The Mystery of the Toynbee Files 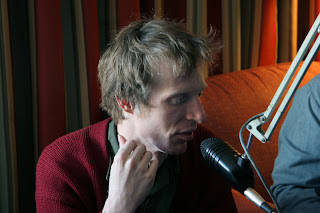 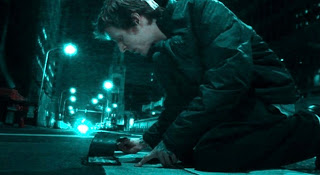 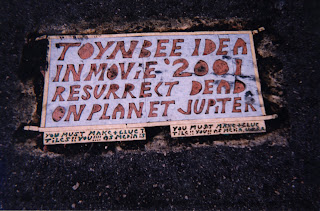 RESURRECT DEAD: THE MYSTERY OF THE TOYNBEE FILES        B-
USA  (86 mi)  2010  d:  Jon Foy                      Official site
The first thing that comes to mind about the makers of this documentary is that they have all too much time on their hands, as for over ten years they have been fascinated with following the mystery of whoever has been laying street tiles around Philadelphia and other urban centers with cryptic messages, called the Toynbee tiles, as they reference British historian Arnold Toynbee’s idea, a possible interpretation of the ending of Kubrick’s 2001:  A SPACE ODYSSEY (1968), suggesting humans are scientifically evolving to the point where they can molecularly recreate themselves after death, creating their own afterlife, replacing the idea of God and heaven, expressed in the Kubrick film during the final segment entitled Jupiter and Beyond the Infinite.  The investigation begins in an era when there was no Internet, around 1987, where one was simply confounded by the presence of street tiles showing up all over the city of Philadelphia, wondering where they came from and who was responsible.  Eventually one of the investigators was so excited he skipped school so he could explore the origins of this mystery at the public library on the brand new Internet, but it appears his investigative computer skills were sorely lacking, as the entire concept was still brand new.  There were search engines, but Google hadn’t been invented yet.  This first time director, who scored the music to his own film, discovered a group of three zealous individuals, also from Philadelphia, who seemed to be concerned about nothing else in life except the mystery behind this strange and mysterious occurrence.  Together they started working on the film around 2005 (a year after the public unveiling of Google) and have been following their leads for the better part of half a decade, releasing this film at Sundance in 2011, where Jon Foy won the Best Director Award for a Documentary Film.

The principle investigators:  Justin Duerr, initially seen as a possible suspect behind the mystery because his knowledge and fanaticism are so extensive, an art school dropout with a manic obsession about anything relating to this subject:  Colin Smith, who appears to be the lead Internet guy, as he runs the Toynbee Tiles Internet message board known as Resurrect Dead Message Board - Home, and a guy who has sifted through mountains of Internet messages and possible clues:  Steve Weinik, a photographer that documents the tilings, curiously familiar with this issue since grade school.  What immediately strikes one about these guys is that they are good natured souls without any qualifications whatsoever in becoming sleuths, as they are purely amateurs, just ordinary guys who spend a lot of time on the Internet.  This identification with the average viewer is one of the startling aspects of the film, as they represent exactly how people spend their time nowadays, usually parked in front of a computer checking out all sorts of information, becoming amateur sleuths where our collective computer searches have led Google to become one of the most successful businesses in the last decade.  What these guys uncover, and how they uncover it, form the basis for the film, where it’s not all dry facts, but an assemblage of humorous as well as outlandishly impossible leads, all of which eventually aid in narrowing down the possible suspects.  My favorite was a guy named “Railroad Joe” that used to work for the railroad, who spent countless lonely hours passing through nearly all of the affected cities in the dark of night, as his route was like a roadmap to the street tiles.  The pace and sudden interest in the film spikes with the possibility that this is our guy, as everything fits, but boink—the guy’s been dead for years, so unless he came back from the dead to lay a few more titles, this is not our guy.  This incident beautifully exposes the weakness of ordinary guys working without training, following leads and creating suspect profiles, building up all this false hope that suddenly fizzles and evaporates like the air was let out of a balloon.
This seems to be the kind of film conspiracy theorists would love, as the mastermind behind this operation, who claims to be only one man, leaves a series of clues that speak to his overly paranoid state of mind, where he thinks people are following him and trying to kill him, where in a moment of personal rage he rants “Kill all the journalists.”  Perhaps he was referring to the lawyers in Shakespeare’s nasty little history play Henry VI, which deals with a series of bloody horrors between two rival royal families known as the Wars of the Roses.  But like the Unabomber, the tiler leaves behind one tile that serves as his manifesto, a lengthy diatribe outlining his enemies which he describes as the Cult of the Hellion.  This is all too surreal except that the tone of the film is joyously upbeat and humorous, as these guys find endless fascination in pursuing and unearthing every clue, where much of this resembles the gleeful innocence of Mark Borchardt in Chris Smith’s AMERICAN MOVIE (1999), where people can become obsessed and spend the rest of their lives following their own strange curiosities, which they idealize as dream projects.  It’s amazing what lengths these guys go to in tracking down even the most unlikely possibilities, yet they’re all-in, reconfiguring how this all plays out in their minds, where they’re continually reevaluating the evidence, showing a surprising degree of sensitivity to the possible subjects, as they don’t wish to taint these individuals with the brushstrokes of their own mistakes and misperceptions, so they keep a careful distance, making sure of their facts before they intervene.  But these guys are not 60 Minutes, and while their knowledge is fascinating and peculiarly mystifying, their success rate is abysmal, leaving the viewers wondering about becoming obsessed with personal pursuits and dreams, where after awhile, once you start chasing after the illusory windmills of Don Quixote, it’s impossible to stop.
Note:  due to the sudden elevated interest in Toynbee tiles from the release of this film, there has been an outbreak in copycat tilers, where the original has now been replaced by a series of cloned tilers that are continuing to carry out the work of the original mastermind, which ironically meets the scientific definition of regeneration, where apparently his work will continue well after he’s dead and gone, not on planet Jupiter however, but right in his own home town.
Posted by Robert Kennedy at 12:12 AM