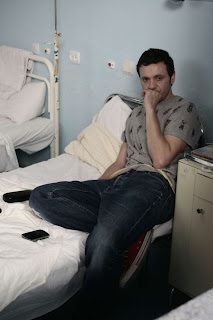 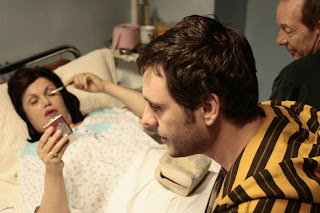 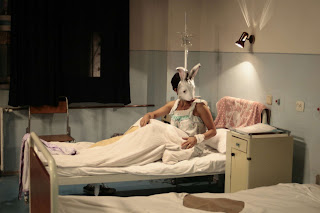 BEST INTENTIONS (Din dragoste cu cele mai bune intentii)            B-
Romania  Hungary  (105 mi)  2011  ‘Scope  d:  Adrian Sitaru   Official Facebook
Another intensely personal Romanian drama that thrives on realism and the meticulous detail of daily life, featuring the actor Bogdan Dumitrache as Alex in nearly every scene of the film, a young urban professional in his thirties who believes Romania has finally broken into the modern era, using the constant companions of an Apple laptop computer and a cell phone to communicate with the world, where much of the film is exactly that, listening to his various phone conversations.  His girlfriend Delia (Aline Grigore) is cute and optimistically supportive, ideally suited for his downbeat mood swings where he’s quick to express anger and disgust.  Just as he’s about to leave to meet a friend for a beer, he receives a panicked phone call from his father that his mother just had a stroke and is in the hospital, immediately canceling his plans and taking the first train to whatever small town they live in.  On the train, a woman sitting across from him overhears the phone details of his mother’s plight, offering him neverending stories of the various sick people she’s known in her life.  Constantly updated by the minute over the phone, he also calls doctor friends he knows for advice and instructions, where he immediately develops the idea that she’d be better suited in a more modern hospital.  So from the moment he arrives on the scene, picked up by his more laid-back father, Alex is a bundle of nerves who can’t stop obsessing over what to do for his mother.
Much of this is apparently the autobiographical experience of the director, who spent several years writing and preparing to direct this film, never really rising above the typical Romanian realist template, so while the rapid fire dialogue from Alex feels very stream of conscious, as if he’s thinking up whatever he says on the spot, giving his role the feel of spontaneity, every word is actually scripted, suggesting Dumitrache really deserves much praise for his efforts, as it’s a remarkable performance.  The theme of the film seems to be a child never becomes an adult in life until the moment they are responsible for their own parents.  Alex becomes a basket case of bungled nerves even before he arrives on the scene, which only accentuates over time.  His mother, Natasa Raab, is a wonderfully round, warm-hearted, and endearing woman with kisses and affection for all, who loves to eat by the way, but she has had some forgetful moments and some crying spells.  However, once he arrives she falls right to sleep.  Alex obsesses over what he hears is the significance of the first 24 hours, where he’s positive she’s going to wake up and become a person he doesn’t recognize, and he’ll never be able to talk to his mother the way he always has in his life.  He goes back to visit while she’s asleep and chats with her two roommates who are both awake, one a psychologically damaged head case and the other a recent accident victim whose face is so disfigured that she wears a long-eared bunny mask around visitors, eventually deciding she is in good hands.
When Alex returns, convinced he’s going to move her out of the hospital, she’s surrounded by flowers and food and about a dozen people all devouring her with friendship, coworkers, friends who work in the hospital, and various neighbors are all out in force with his mother beaming by all the attention.  Of course, Alex tells her doctor of his intentions, which his own father believes is a personal insult and the picture of ingratitude, as this doctor’s intervention may have saved her life.  Nonetheless, Alex, somewhat hesitatingly after seeing his mother’s happiness, remains convinced, even if it’s only to alleviate his own fears instead of his mothers.  This is the absurdity of his situation, as soon as he arrives on the scene and tries to be the good son taking over responsibility for his mother’s care, all done with the “best intentions,” he becomes a nervous wreck and behaves more like the sick patient, while his mother is the most popular patient in the hospital.  But when he arrives the next morning and sees traces of blood on the floor, with his mother coming out of the restroom with a mop in her hand to clean the floor, Alex just about loses it, telling her there’s people in the hospital who take care of that.  But his mother insists they’re all busy at the moment, so it’s no problem.  Apparently she had traces of blood dripping from her IV when she tried to go to the rest room at night, but Alex decides it’s more than he can stand and it’s time to move hospitals immediately.  This picture of absurdity is occasionally amusing, but the hospital setting overall is a picture of dreary routine, yet it’s inhabited by some enchanting personalities.  Unfortunately, Alex is not one of them, as he grates on everyone’s nerves after awhile, which one gathers, is the point of it all.
Posted by Robert Kennedy at 9:30 PM