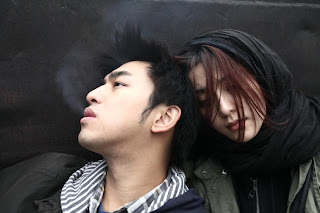 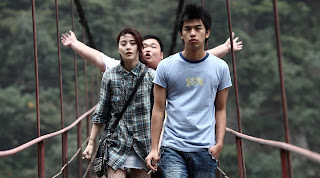 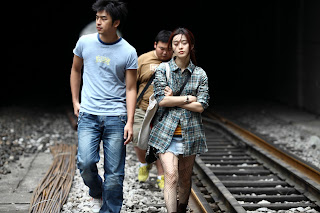 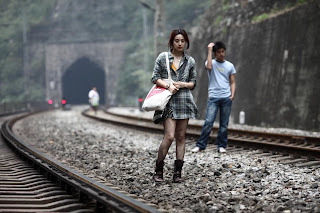 BUDDHA MOUNTAIN (Guan yin shan)                     A-
China  (101 mi)  2011  d:  Li Yu
Without any fanfare, this is a special treat, one of the most sublime and drop dead gorgeous films of the year, a rare mix of the hopelessness of the current generation, as portrayed by lounge singer Nan Feng, Chinese actress Fan Bingbing, a fearless in-your-face girl who steadfastly stands up for her friends, and her two admirers, bike courier Ding Bo, handsome Taiwanese actor Chen Bo-lin, and his comically rotund sidekick known as Fatso, Fei Zao (Fei Long), reflecting the down and out, rebellious youth style of Jia Zhang-ke’s UNKNOWN PLEASURES (2002), and the classical elegance of an earlier generation, reflected by a towering performance by Taiwanese actress Sylvia Chang.  Little do we know what’s in store for us in this movie, as it starts out like many other coming of age films, establishing a near documentary rhythm and lifestyle of this threesome, much of which is captured through vibrant street scenes, where their infectious energy represents the pulse of the nation, but they feel no connection to their country or their future and are largely disconnected from their families, living day by day, spending what they earn in food keeping Fatso happy.  Their easy going style with one another is quite reminiscent of the French New Wave, shot in vérité style by Zheng Jian, who also edits the film, where their casual and mostly reckless behavior often finds them clashing with others, where their offbeat, non-conformist manner sets them apart.  When performer Nan Feng accidentally hits a front row patron in the groin with her swinging microphone onstage, she loses her job at the same time their home is about to be demolished, finding a new apartment in the home of a retired Beijing Opera star Chang Yueqin (Chang), a quieter, much more reserved personality.  No one thinks this living arrangement will succeed, least of all Chang who is constantly criticizing their rude manners and behavior, usually mocked and mimicked behind her back afterwards.
We soon learn Chang has a deceased son she never talks about, as his photo is in the living room, and Chang secretly keeps a car in a garage which still has a bashed in windshield.  When the kids find the car, they get it started and go on a joyride, experiencing momentary bliss on the road but eternal condemnation from Chang upon their return, where she is heartbroken at their sign of disrespect.  What follows is a train ride sequence where the three hop a freight, one of the most breathtaking wordless sequences seen all year both in length and poignancy, passing through endless mountain tunnels and some of the most impressive natural scenery in China, beautifully accompanied by original music from Peyman Yazdanian.  Interjected into this harmonious beauty is real life news footage of the 2008 Sichuan earthquake killing nearly 70,000 people, leaving nearly 5 million people homeless, where on Buddha Mountain this trio eventually finds a shattered Buddhist temple in a lush mountainous landscape in ruins, where the Master on the premises indicates he plans to rebuild, which becomes a prominent theme of the film, where these rootless stragglers need to find something worth holding onto.  When Ding Bo, who never expresses his feelings, is caught with another girl, Nan Feng ditches him and leaves town, perhaps forever, making him feel foolish and regretful afterwards, something Fatty doesn’t let him forget.  Nan Feng goes back home and stands up for her mother, as her abusive and alcoholic father is in the hospital with cancer.  This is one of the more singularly ferocious scenes of the film, perfectly expressing the in-your-face attitude of this young woman.
But it is the haunting beauty and quiet personal devastation of this film that most impresses, freely moving the characters in and out of the frame, continually changing the focus on who remains onscreen, perfectly expressing the restless anxiety of youth, never amounting to much, never seemingly satisfied, but along with the tragic implications of the earthquake, the director also adds the breathtaking beauty and extreme tranquility of the world that is also within their reach, using a complicated editing scheme, often changing the pace, reflecting the changing rhythms of the characters.  The style evolves as the interior world of the characters changes as well, each broken and damaged in differing ways, the wounds becoming more exposed, where each has an unspoken sense of the tragic depth of each other’s anguish and pain, which holds them together, like an extended family, where quietly Chang becomes a silent force onscreen, nurturing them in ways they’ve never dreamed possible, becoming a dominant presence in their lives.  The director blends together poetic notions of fragility and loss, loneliness and friendship, but also a haunting regret and a renewed sense of place in the world, filling a spiritual void.  But the aftermath of this film is one mixing grief with the haunting beauty of the mountainous landscape filled with lakes, natural springs and spectacular waterfalls.  Renewal or rebirth is the quality of transcending life’s endless series of tragedy and pain, where this film is beautifully affixed on the journey of that transcension.
Posted by Robert Kennedy at 1:30 AM