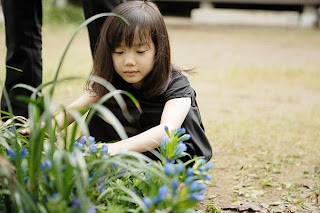 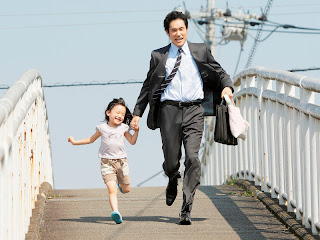 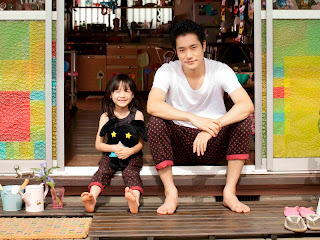 BUNNY DROP  (Usagi doroppu)            B
Japan  (115 mi)  2011  ‘Scope  d:  Sabu (Hiroyiki Tanaka)
Taking a page out of Takeshi Kitano’s endearing KIKUJIRO (1999), where an adorable young child hooks up with an improbable gangster yakuza on a road journey across Japan, where their diametrically opposite impulses keep the viewers on their toes and the film from sinking into familiar territory, Sabu on the other hand instead chooses a more formulaic style, a single man raising a child, told in a rather straightforward manner but then enhances the experience by for the most part avoiding cheap sentiment.  Once more, the centerpiece is an enchanting child, in this case 6-year old Rin (Mana Ashida), who resembles the daughter Sachiko (Maya Banno) in Katsuhito Ishii’s THE TASTE OF TEA (2004), noticeably off to the side with no one paying attention to her during a grandfather funeral service, where it turns out she is his illegitimate child.  Everyone is too involved with their own affairs to worry about this child, believing child services would eventually intervene—everyone, that is, except the deceased’s grandson, 30-year old Daikichi (Kenichi Matsuyama) who asks if the child would like to come home with him where he gets a quick refresher course on parenthood, knowing next to nothing, but stubbornly refusing the help from his sister (Mirei Kiritani) who indicated he would crack within a few days.  Adapted from a manga comic by Yumi Unita, the point of view is clever enough to include Rin’s views throughout the film, feeling very much like a Miyazaki children’s film, as Rin has to make her way through this terrifying experience virtually alone, where Daikichi is more of her sidekick than the other way around.  Rin is firmly the centerpiece of this film.
What is clear from the outset is that the two are perfectly matched, as both are a bit mature for their age, but Daikichi’s refusal to patronize the young girl helps considerably, as they work as a team, where she offers him advice on parenting skills, which are needed, as he quickly finds a child care center, but it’s unnerving having to carry this new girl through rush hour commuter trains and the swarms of pedestrian foot traffic in order to eventually find a center which is nowhere near his job, where he has to sprint the entire way if he expects to make it to work on time.  It’s evident no one could keep up that hectic schedule, where he’s forced to transfer to a lower paying position in order to avoid the late night mandatory overtime, arriving much too late to pick up Rin.  It’s amusing to discover none of his original coworkers had children, but all of his new coworkers do, where they’re quick to compare photos of their kids.  But the heart of the film is the interpersonal relationship between Daikichi and Rin, as it’s a sweet and warmhearted duo, told realistically and intelligently, where they both earn every bit of love and affection that they offer and receive.  Rin, for instance, occasionally asks profound questions, developing a complex inner life of her own.
The first variance from the tone of realism are Daikichi’s daydream sequences, where he sees gorgeous women in magazine photo shoots and instantly fantasizes dancing an ultra-sensual tango, where the two sizzle with sexual intoxication, which are delightfully amusing moments, nothing kinky about them, but adds a suave and debonair step to Daikichi’s character.  He’s no super parent, as his many mistakes only make him more endearing and vulnerable, where he’s helped along the way by another single mom (Karina, one of the dazzling women in his fantasies) whose son and Rin become fast friends.  They are apparently the only two kids at the childcare center without two parents, as they are deeply affected by an assignment to draw many different pictures of their two parents, which sends them bolting out the door on a journey alone through the city.  Reported missing, there is a frantic citywide search for them, which has a familiar tone with Miyazaki’s MY NEIGHBOR TOTORO (1988), especially the way the search brings everyone closer together, an effective use of unforced realism, where a child’s world is not patronized or embellished by cheap narrative tricks, but is fully captivating by the attention to small details that capsulizes what matters the most, where their whole world is present in these everyday moments, often enhanced by Masayuki Iwakura's quietly effective score.  One of the best sequences of the film is a parallel alternative to Daikichi’s fantasy sequences, a children’s theatrical spectacle where they’re all dressed up in costumes and where the universe of children couldn’t be more magical and alive.
Posted by Robert Kennedy at 12:00 AM