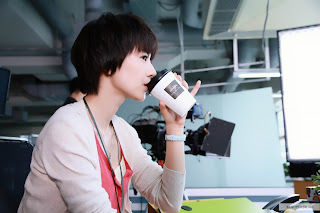 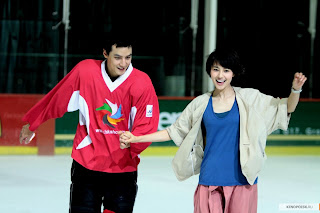 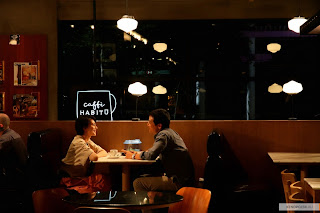 DON’T GO BREAKING MY HEART (Daan gyun naam yu)       B-
Hong Kong (115 mi)  2011  ‘Scope  d:  Johnny To       co-director:  Wai Ka-fai
What’s a film festival without a Johnny To tribute to romanticized love stories featuring plenty of eye candy, an over saturated color scheme, young up and coming professionals in love, and enough ongoing silliness to recall the days of Love American Style, a popular early 70’s TV show that featured an ongoing rotation of celebrities, or some variation like MARRIAGE ITALIAN STYLE (1964) with Sophia Loren and Marcello Mastroianni?  What’s not to like, as this is as sugar coated as movies get, a light and breezy love triangle that features two guys trying to get the same girl?  Louis Koo showing his best Bruce Lee profile is a playboy seen in the opening driving his Mercedes convertible (later a Maserati) through the streets of Hong Kong as Shen Ran, the CEO of his own investment company, who spots the adorable girl of his dreams riding on a bus, Zixin (Gao Yuan Yuan), but loses her in the crowd.  Instead, she’s immediately helped by a street drunk Qihong (Daniel Wu), an overly friendly helpful guy who offers her a hand just after she’s been dumped by a Video game loving, toy collecting, and frog-possessing former boyfriend who’s moved on with a pregnant and overly hysterical new girlfriend.  Zixin unloads all her unwanted ex-boyfriend’s possessions on Qihong, including his entire liquor supply and pet frog which are most appreciated, pretty much dumping the rest.  It turns out Qihong is a former architect who’s actually designed several buildings in Hong Kong, so Zixin asks him to stop drinking and design another, agreeing to meet in a week, which of course, never happens, as life takes some crazy turns.
Wouldn’t you know, Shen Ran’s skyscraper office faces the desk of Zixin in the neighboring building, where he starts plastering notes and pictures in the window to get her attention, which actually works, also attracting the attention of another buxom office worker, Angelina (Larisa Bakurova), who works a few stories below thinking all the attention is directed at her.  When he suggests they meet, he gets smothered by the sexualized Angelina, who takes his mind off Zixin, who sees them together the following morning, posting “asshole” on the office window.  This turns into a game of hard to get as she never wants to see him again, set in the financial turmoil of the international economic crisis, where each company was forced to make big cutbacks, but Shen Ran eventually buys Zixin’s company, becoming her boss, where he immediately finds ways to make her busy and keep her close at hand.  He orders her to pick out a new luxury car, a penthouse suite, as well as the interior furnishings, all ultra-stylish examples of extreme wealth on display, where he attempts to buy his way into her heart.  And it nearly works, until she realizes why she doesn’t trust the guy.  Incredibly, a cleaned up Qihong reappears in the office across the way, as he’s back designing buildings, including one in Zixin’s home town of Suzhou, where he’s forced to compete in this office window charade of attracting the girl’s attention through playful originality, and the guy’s a born natural, featuring a sentimental singing frog.
What to do, what to do, as she’s got her heart falling for two gorgeous guys, each one loaded, where Hong Kong is back in the flush of money and success, where the city is once again a showpiece on display in a Hong Kong film which is fortunate to have such a panoramic skyline and backdrop for movies.  Despite all the love and silliness, the film doesn’t sustain the interest throughout, lagging somewhat as the game gets prolonged, as the competition just elevates to the ridiculous, as these guys are like super characters with the money and power to accomplish just about anything.  Zixin’s talent is her joyful optimism, as she’s a cheerful addition to any room, where even in her most gloomy state, she continues to radiate warmth and affection, though her playfulness is a bit girlish.  Koo exudes his playboy charm, still something of a snake at heart, while Wu also has a boyish and trustworthy nature, the kind of guy who’s not nearly as interesting, but is reliable and dependable - - hint:  marriage material.  Who would you rather be married to, the charming, James Bond style international playboy who commands instant respect wherever he goes, or the likeable guy adored by your family for all the right reasons, as he’s never full of himself, placing her interests first, but he’s also not nearly as much fun to be around as the snake?  As for the sexual sizzle, which guy?  Her indecisiveness takes forever, which can get annoying, where you might start to root for a third option, like dump the girl and let the guys have a go at it, which would at least be a surprise.  Whatever happens, expect all is right in the ever invigorated Hong Kong film industry which keeps churning out the hits.
Posted by Robert Kennedy at 1:03 AM