The Forgiveness of Blood 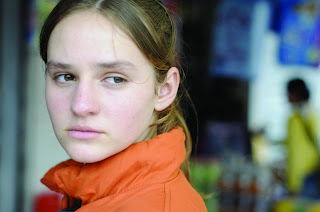 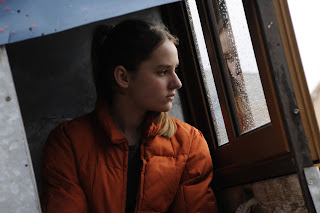 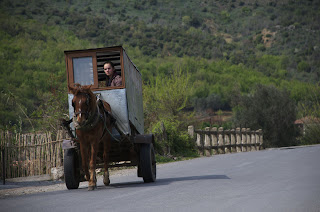 THE FORGIVENESS OF BLOOD        B+
USA  Albania  Denmark  Italy  (109 mi)  2011  d:  Joshua Marston
This is the kind of film that international film festivals are all about, as this is an American journalist turned filmmaker making his second feature film in a foreign language, first the Spanish-language MARIA FULL OF GRACE (2004) and now this one, a joint American-Albanian production set entirely in Albania, easily one of the most obscure nations around the globe.  I recall Peter Ustinov being interviewed by Johnny Carson on The Tonight Show where he routinely spoke about his travels around the world, where Johnny asked what was the least interesting country he ever visited.  Ustinov unhesitatingly stated Albania, as all they had was a small military museum with a few uniforms and some medals, and that was about it, something you could view in less than half an hour.  Decades later, little has happened to change the world’s perceptions of Albania, although we know in Kosovo they were the target of untold massacres from Serbian ethnic cleansing under the Slobodan Milosevic era of the 1990’s, leading to the intervention of NATO.  But this film offers no background information, no politics, where instead the viewer is simply immersed into the rhythms of life in a rural region of Albania.  Like the Montagues and the Capulets, the men from two families are bickering with one another in a bar, continually hurling insults from one table to the next, which initially feels good natured until the tone grows more vicious and threats are made.  The film follows only one of the two families, where the pastoral landscape suggests a peaceful calm, as making a rustic living is hard and nothing comes easily.  The father drives a horse driven cart delivering bread, using a short cut through the neighbor’s land, which was originally his family’s land, but the neighbor is up in arms at this sign of disrespect.
Marston slowly establishes a familiarity with the family, where the oldest son Nik (Tristan Halilaj) is constantly ridiculed by the older men as he’s still just a skinny kid, but he’s excited to have a girlfriend at high school, while the oldest daughter Rudina (Sindi Lacej) is a bright and promising student, a girl whose educational prowess offers future possibilities unlike anyone else in the family.  The film is largely seen through their eyes, especially after an offscreen incident changes the family dynamic, where the neighbor’s son was killed in a barfight with their own father and uncle, where the uncle was immediately incarcerated while their father escaped and is in hiding, turning this movie into a protracted blood feud.  As is Albanian custom, the male kids must stay home from school for their own protection, subject to a revenge killing if they or any adult males are seen outside the protection of their house.  Rudina, meanwhile, is pulled out of school and makes the bread rounds in place of her father.  What’s remarkable about this film is how little attempt is made by the director to explain what’s going on, as the viewer must process the changing information as it develops, where the peculiarities remain just that, oddly peculiar, making this a strangely baffling film told with complete sincerity, without an ounce of artifice, where much will remain outside the comprehension of Western audiences.  There are references to Albanian cultural traditions through the Kanun, where knowing the laws and interpreting them are two entirely different matters, where mediators often attempt to end long standing family feuds that literally exile or incarcerate under house arrest the male members of both families, sometimes for years on end.
Rudina’s world turns upside down, as she knows little about the ways of commerce, but soon learns little tricks of the trade to prevent being taken advantage of, and her honest reputation earns her the respect of her customers.  But she soon realizes she has to go above and beyond into the more dangerous world of black market goods if she wishes to actually earn a living, where the male oriented societal prejudices prevent many potential customers from taking her seriously.  Nik, meanwhile, is going stir crazy, where he hasn’t a clue what to do with his life away from the one girl that really matters to him, where he sits around all day feeling sorry for himself growing so internally desperate that he’d be willing to abide by whatever the neighboring family’s terms may be, as he wants his life back.  When his family makes it clear that is not an option, that is capitulation, Nik shows psychotic and suicidal tendencies, where without the support of his friends, he’s something of a weakling in the face of a full fledged crisis.  The younger siblings also show demonstrable personality shifts, growing more despondent and aloof to any family authority, where one by one they slowly lose faith in themselves.  This process may feel punishingly slow and endless to the viewer, made even more disturbing by withholding the length of time that passes, as it’s excruciating to witness this kind of slow descent into personal turmoil, especially without knowing the cultural background for why this is imposed upon them in the first place, as this self-inflicted practice feels rather primitive and barbaric.  But it’s precisely this insight into something so peculiarly novel and unique to our own customs that makes this film so vital, as it’s a window into the Balkan conflict, where the feuds themselves make little sense, growing ridiculous after awhile, succeeding into the next generation and the next, where the stubborn insistence of the families that they are the wronged party, refusing to take any responsibility whatsoever into whatever precipitated the conflict in the first place, which only gets lost after awhile, where the near illiteracy of the participants makes this even harder and perhaps impossible to understand.

Both Joshua Marston and Andamion Murataj are winners of the Best Screenplay at the Chicago Film Festival “for a lovingly crafted story that takes us on an intimate journey through the fate of families that are ruled by the laws of honor and vengeance. The writers lay out for the audience the complexity of human relations and make us reconsider our own standards and convictions.”
Posted by Robert Kennedy at 1:59 AM