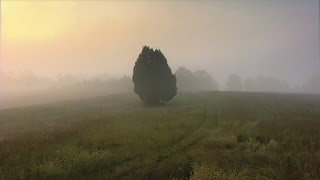 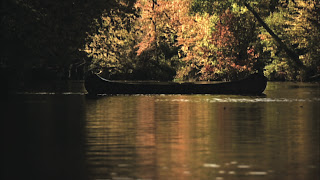 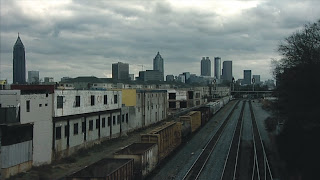 GENERAL ORDERS NO. 9 – video               B
USA  (72 mi)  2009  d:  Robert Person             Official site
You are not a witness to the ruin. You are the ruin, to be witnessed.
—Narrator (William Davidson)
The reviewers that claim this film is reminiscent to Terrence Malick, or for that matter essayist Chris Marker (about half the reviews), simply don’t understand the depth and profound complexity of these two unique and highly original filmmakers, both of whom are among the best filmmakers of their era, where accolades still don’t express how deeply they have changed the face of cinema.  This director, on the other hand, seems to have some idea what he wants to express, writing, editing, handling the camera and directing the work, but the film grows overly repetitive, repeating the same downbeat tonal note, where his narrative thrust meanders to the point of listlessness, which is a shame, as there’s obviously an intensely personal message along with a visual palette that’s gorgeous to appreciate.  Unfortunately the film is shot on video, usually a fatal flaw for films with such a reliance on visual composition, where this choice certainly diminishes the overall look the director is looking for, flattening the screen, eliminating much of the texture that would enhance the lustrous color and beauty of the film.  The director spent 11 years making his debut feature, narrated by the somber reflections of William Davidson, an abstract, somewhat experimental essay on the changing landscape of Alabama, Georgia, and Mississippi, suggesting the character of the South, especially Georgia, the director’s home state, has been deeply compromised since the Civil War.  With the collection of artifacts and relics, including old coins, the initial allure of the film is expressed through a backwoods country landscape that includes lines of graves, where remnants of the Civil War, like old abandoned shacks in the woods or shaded, tree-lined creeks have been grown over for almost 150 years, yet old wounds may never heal.
The narrator suggests there was an order to this landscape, a topography that made sense, where people felt a relation to the land and the world around them, but acknowledges the Indians were driven out of their lands, “foot by foot,” to make way for the coming white advancement.  The title makes reference to General Robert E. Lee’s farewell speech to the Northern Virginia Army on April 10, 1865 (First Printing of Robert E. Lee's General Orders No. 9) just before his unconditional surrender to General Grant, a compassionate speech of heartfelt poignancy and grace, one that honors his men with words drenched in gratitude.  It is precisely those sentiments that are now fleetingly missing from the Southern heartland, chopped into segments by Interstate highways cutting through the regions, markedly changing the face of the cities, not to mention the impact on environmental destruction.  While the director portrays Georgia as a stronghold against a growing consumer culture, he fails to mention the influence of railways or Wal-Mart, in particular, which has had a far more devastating impact on the very look of small towns all across the South, as the corporate Mega-giant underpriced existing Mom and Pop stores, even Winn-Dixie supermarkets, all reflective of a culture of store owners that once knew their customers as longtime neighbors, now nearly all of them out of business, drying up the downtown retail market for faceless Big-Box stores in the outlying suburbs usually located right next to the highway.


Despite a portrait of an untainted natural beauty, the director also utilizes archival photographs, many showing what a downtown city looked like over a hundred years ago, at one point superimposing this image in front of the sprawling skyline of Atlanta today.  The urban characteristic of Atlanta is shown to be a cement graveyard of uninhabited, wasted space, including long empty hotel hallways where nary a soul is seen, an eerily empty, cement parking lot garage without a single car, or a back entrance of a giant mall store where trucks make deliveries, images of a ghost town surprisingly quiet when there’s no one there.  The underlying theme appears to be the death of the Confederacy, still undergoing a slow decay, not viewed as a politicized notion but as something that was once romanticized, idealized, and cherished, a reverence for the land expressed through a haunting stillness and emptiness, some destroyed through natural causes like hurricanes or tornadoes, where the director treats the hallowed grounds as something sacred, like Gettysburg.  Perhaps the most chilling shot is an historic archival photo of a downtown public square that is absolutely jam packed with people stuffed together like sardines, where it’s impossible to comprehend why they have gathered together with such immense interest, until the picture slowly expands and a black man is standing on a wagon elevated above the rest, like an apparition, one man alone surrounded by a sea of whites that can only have one vile act in mind.  Not a word is spoken about this image, but the camera lingers for a moment before moving on.  The film’s elegiac tone resembles a requiem for the dead, featuring no natural sound, but a wall to wall electronic score and original music from Chris Hoke, but also haunting choral music from John Tavener, including “Mother and Child” heard here:  Theotokos on YouTube (4:37).  The slow pace may test the patience for some, but he makes effective use of slow motion, where at some point time seems to stop altogether, like a canoe filled only with books floating downstream, knowledge passing through time, or when we see a flickering ghostly image of a human being moving slowly, clouded and blurred by smoke, a solemn visualization of a living person taking on a non-recognizable spirit form, like something out of a Weerasethakul film, a chief exponent of ghosts and a human relation with the everlasting afterlife.
Posted by Robert Kennedy at 12:28 AM