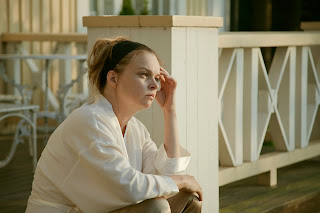 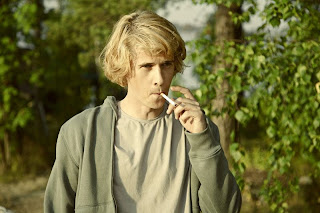 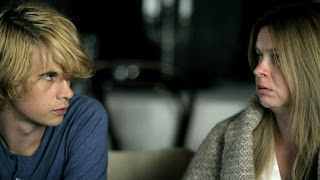 THE GOOD SON (Hyvä poika)                B
Finland  (88 mi)  2011  d:  Zaida Bergroth
Don’t we all wish we had a gorgeous remote lakeside cottage deep in the woods that we could retreat to?  Wouldn't that solve a lot of our collective ills, like a mind curative seminar or retreat?  Well that’s exactly what actress Leila Manner (Elina Knihtiä), a woman used to being the center of attention, has in mind after seeing her name plastered across the tabloids, using her as the butt of the nation’s jokes, something that really aggravates her, so it’s off to her summer villa on the lake with her two sons in tow, the older Ilmari (Samuli Niittymäki), a moody, downbeat, and extremely self-absorbed teen and the much younger Unto (Eutu Julin), who is largely left alone to fend for himself.  It’s interesting that the initial visit establishes a visual cue used throughout the film, a quick pan of the water leading up to the home beginning as if we are standing on the near shore, so there’s a quick zoom across the water right up to the shoreline in front of the house, as if something dark and foreboding is about to happen there.  What’s soon apparent is that Leila has absolutely no parenting skills, where these kids must have raised themselves, as she never lifts a finger to spend any time with them and instead quickly plans a weekend party of friends where they can all get wasted.  One guy even falls out of an arriving car naked and unconscious, already wasted before he got there.  They let him lie there, put a parasol over him to protect him from the sun, and ignore him until he decides to join the party on his own.  Other than that, it’s a typical display of boorish bad manners and insulting remarks, occasional old-fashioned music, where one of the guests is quickly escorted out the building for making less than flattering remarks about the dramatic prowess of the hostess.
Other than the obnoxious behavior of the rich, who spend their lives thinking only of themselves, the brooding Ilmari grows extremely protective of his mother, behaving like her bodyguard, removing from the premises anyone or anything that might cause her any degree of alarm, spending much of the weekend lost in thought just staring at his mother.  When a published author, Aimo (Eero Aho), decides to stay on after the others have left, Ilmari grows disgusted at his presence, which his mother of course ignores.  Wandering into town, Ilmari is quickly propositioned by a waitress, Karita (Anna Paavilainen), inviting him to a party, where to a slow and sultry Finnish song, they have sex.  Afterwards, wandering along the beach where stragglers are still drinking, Ilmari listens to a series of insults about Karita before bashing one of the guilty in the head with a beer bottle.  So much for subtlety.  The next morning as his mother and Aimo are having their post coital morning coffee, Ilmari is lying in the sun with Karita, mirror images of one another, both preening like peacocks.  As always, poor Unto is left to fend for himself, usually dragging along a video camera where he invents various narrative passages to amuse himself.
Ilmari is anxiously awaiting that moment when he can kick out Aimo as well, something he’s apparently done his entire life, but his mother has alerted him that there’s something different about this man, and despite her initial cool veneer, dropping hints of disinterest, Aimo’s been smart enough to read his own signs and not be fooled by hers.  Attempting to help out around the place and make himself useful, Aimo also makes an effort to bridge the gap with Ilmari, who has none of it, responding with lowlife gutter language which gets him shoved off the pier into the water, where mysteriously the kid can’t swim and is thrashing around violently, so Aimo rescues him even though he was never more than 5 or 10 feet from the pier.  Rather than calm the storm, one can only suggest these are initial signs of that descent into the dark night, where the camera again skims over the water, poor Unto is once more left alone, and things only grow more shocking and macabre at the lakeside retreat.  This filmmaker does show a directorial flair with an economy of style, winning the 1st Prize in the New Director’s Competition at the Chicago Film Festival, “for its real psychological insight. Economical without being overly abstract, the film depicts each character as selfish, but dependent on someone else, exposing their unstable familial relationships. Director Zaida Bergroth impresses with her ability to create characters and their environment, intersecting in believable yet shocking ways.”
Posted by Robert Kennedy at 9:13 PM