If Not Us, Who 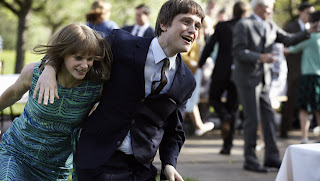 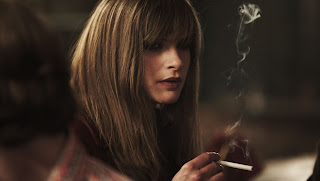 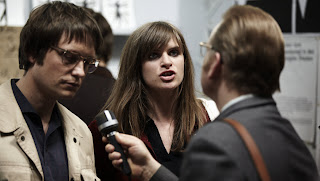 IF NOT US, WHO (Wer wenn nicht wir)          B
Germany  (124 mi)  2011  ‘Scope  d:  Andres Veiel
Why is it so hard for films to get the 60’s right?  Very few capture the right tone of the era, such as Eustache’s THE MOTHER AND THE WHORE (1973) or Coppola’s APOCALYPSE NOW (1979), both of which blend a surreal surge of initial optimism with a fatalistic, Kafkaesque emptiness, exposing a void of leadership or hope, where those responsible for leading social movements were out of the picture by the end of the decade, assassinated, arrested, or dead, yet the Vietnam War was still raging out of control, and no one apparently could stop it, despite the dead bodies and disgust it brought to so many Americans, whose mistrust of their government would only grow larger with Watergate and Nixon’s resignation.  Andres Veiel started with the idea of making a documentary about the German (RAF) Red Army Faction, including the radical Baader-Meinhof offshoot which moved from taking political action to planting bombs and explosives, but he encountered difficulty with one of the central characters, Gudrun Ensslin’s family, where no one would speak about her on camera, probably for good reason.  This film is a good example, as Weiel accentuates the irrational side of Gudrun and the movement, never really offering a balanced or comprehensive view of the politics that was driving the student movements of Europe and America, and in particular Germany.  As recent films like Uli Edel’s THE BAADER MEINHOF COMPLEX (2008) and Olivier Assayas’s mammoth 5-hour made-for-TV exposé of CARLOS (2010) both explored the political dynamics, Veiel decided to take a more personal approach.  Initially this idea succeeds beautifully, as his picture of Bernward Vesper (August Diehl), the intellectually curious son of Nazi novelist Will Vesper (Thomas Thieme), is chilling in its portrayal of German manners on display twenty years after the war was over, where nostalgic Nazi sentiment still prevailed within the war generation.
Veiel’s screenplay is adapted from Gerd Koenen’s book, Vesper, Ensslin, Baader: Prehistory of German Terrorism, where at Tübingen University in the 1960’s Bernward takes an interest in literature, deciding to form a small publishing house that would usher in a new era of intellectual thought, where he meets fellow student Gudrun Ensslin (Lena Lauzemis), also interested in the expression of radical ideas, quickly becoming lovers, but not the most stable of couples as both venture into sexual affairs with others, which has a crippling effect on each partner, as both attempt suicide at different points preceding their full commitment to political action.  Gudrun is more impulsive and seems driven by whatever feels good at the moment, not willing to invest the time or energy to build alliances, believing a political elite is a necessary vanguard to lead the masses, while Bernward is a more deliberate planner, as he’s really a literature specialist who has faith in the written word, initially the more motivated and driven between the two.  Over time, Gudrun’s politics grew more radical, focusing on the massive bombings and brutal atrocities used by the United States in the Vietnam prison camps, claiming the previous German generation looked aside when the Nazi’s came to power and acquiesced to the atrocities of the death camps, but this modern era had to do all they could to stop these unjust acts, eventually cutting herself off from her family and advocating violent acts of terrorism, as German society remained impassive and complacent in the face of the injustices of the continuing war.
More significant than anything else is Gudrun’s meeting with Andreas Baader (Alexander Fehling), a smug child of European industrial wealth, driving fast sports cars and wearing stylish, expensive clothes, a guy whose rally cry is “Fuck the system,” even though he was in every respect a product of that system.  However, the two fast become lovers, where she is lured into his beliefs of direct action, taking it right to the sources of power, meeting violence with violence, where everything else in their eyes is a waste of time.  This kind of uncompromising take-it-or-leave-it position is quite similar to the American conservative intolerance in the 60’s of leftists against the war and outside agitators, namely:  America, love it or leave it.  But rather than get into the complex ideologies and political differences of the era, much better described in Edel’s film, Veiel takes the more personal approach of visualizing their road to self-destruction, including Bernward’s fall from grace, all of which ends tragically.  What is easily the best part of this film is the Black and White documentary segments, each featuring musical interludes of iconic songs of the 60’s like SPENCER DAVIS GROUP - Keep on Running (original sound) (YouTube 2:46), Billie Holiday: Strange Fruit (YouTube 2:42), or cover versions of Woolly Bully-Sam The Sham & Pharaohs. - YouTube (2:21), or Summer In The City - Loving Spoonful  (YouTube 2:39).  The rest of the film is more uneven, where the director took some flak at the Berlin Film Festival for his highly irregular portrait of prominent figures from the radical leftist movement, and for good reason, as this movie does tend to sensationalize the less savory aspects of their lives, leaving out much of their more rational intellectual development, and instead leaving a tragic, but pathetic, impression of their ineffectiveness, which even the prison warden sequence suggests is simply not true, as they forced people to stand up and take notice that a clean break from the Nazi past was needed.
Posted by Robert Kennedy at 1:37 AM