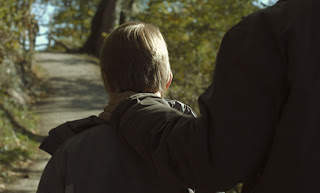 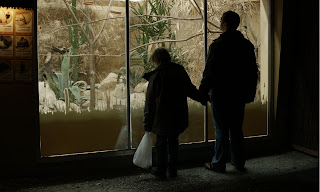 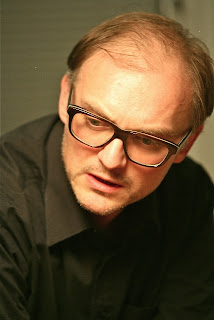 
MICHAEL                   B
Austria  (96 mi)  2011  d:  Markus Schleinzer
The icily cool Austrian veneer doesn’t cover up the fact this is a creepy little film, one where the audience can’t help but hate the protagonist (Michael Fuith), a non-descript, ordinary, Fassbinderish Herr R. (1970) kind of guy who goes to work every day at an insurance company, keeps his home neat and clean, and never draws attention to himself so as not to expose the fact that he’s keeping a 9-year old boy locked in his basement.  We watch the outside of his house in the evening when the shades automatically come down closing the window, literally blocking out all signs of the outside world.  Markus Schleinzer worked as a casting director for fellow countryman Michael Haneke from 1994 to 2010 before venturing out on his own to make this first feature film.  It’s by no means a show stopper or one that even attempts to impress, instead it moves with that glacier pace of meticulous control, where every shot is designed to establish the ordinary rhythm in the man’s life, where keeping a boy hostage as a sex slave is all part of his normal routine, offering nothing salacious or sexually provocative, but the age of the boy and the locked bar on the basement door tells us all that we need to know.  The boy himself (David Rauchenberger) is never named, where his identity is completely submerged, but he’s adorable and docile, obviously accepting of his circumstances for some time now, as he’s allowed to join Michael for dinner, sitting at a table with perfect placemat settings, and together they clean up afterwards and wash and dry the dishes like a well oiled machine.  The boy colors pictures and regularly writes letters to his missing parents that Michael never sends, but in obsessively orderly fashion, keeps the letters in a hidden file, much like the Nazi’s maintained meticulous train records for the transportation of the Jews to all the death camps.
This emotionally repressive style of film has become familiar to filmgoers by now, where the purposeful exactitude is hard to fault, as the composition and editing scheme reveals not only what’s happening, but also makes a comment on the suffocating psychological implications by choking out any hint of emotions onscreen, where it plays out like a recorded diary, never adding any personal commentary, as the interior world of Michael may be pretty close to a void, where the director often captures him sitting all alone in the dark.  Occasionally, however, something stirs inside and he takes the boy out on a field trip excursion, like a visit to a petting zoo, his hand always firmly clasped, where for a brief moment he’s actually part of the world outside.  But for every moment of optimism, it also produces that wincing moment when he’s locked back inside again like a caged animal on display whose only contact is during regular visiting hours, where he’s forced to capitulate to Michael’s world, whatever that may entail.  Where this film does make a brief break from the typical austere stylization is adding bits of humor, where outlandishly enough this occasionally becomes a comedy about pedophilia, where the audience is primed to laugh and poke fun at the sexual possessor, to see what a fool he can make of himself, similar to the use of violence in Haneke films, like FUNNY GAMES (1997), where the films play to the audience’s expectations.  But every variation from the norm is extremely brief, where the established routine dominates the landscape.
As anyone with children knows, it’s hard to raise children alone, and despite Michael’s orderly world, he’s no exception, as kids act up, get hurt, cry, or even get sick, all things beyond his control, challenging the range of his parental skills, as he has to keep his prized possession alive and in good health. We get clues into the boy’s deepening psychological depression and his moments of rage, while also seeing Michael occasionally off his game, as sometimes the boy just isn’t in the mood to play and instead feels listless and disconsolate, where it ends up as Michael boiling over with inner rage.  He’s a man used to getting his way, and as the boy gets older, he’s less inclined to show any interest in what Michael wants from him, instead growing more aloof.  This presents a challenge for Michael, who has no experience whatsoever in human relations or how to motivate the disinterested, and every attempt leads to a further misstep on his part, where it’s his all controlling world that is coming apart, like steam exploding from a boiling teapot.  He lives in constant denial over his captive’s abuse, filling his life with ordinary moments, watching television, living in an ordinary world, but occasionally he gets a good look at himself in the mirror which makes him feel exasperatingly feeble, like a child himself, helpless and uncomfortable, as apparently he’s never matured emotionally beyond the age of his captive, where all he can be is a bully on the block.  A few years ago, there was a common theme of movies using the Turtle’s song “Happy Together,” often to humorous effect—see Wong Kar-wai’s HAPPY TOGETHER (1997) or Christophe Honoré’s MA MÈRE (2004), for instance.  Here the director has chosen a variation on a similar song to a chilling and strangely provocative effect.
Posted by Robert Kennedy at 11:45 PM