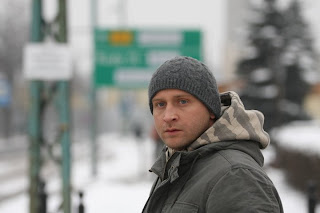 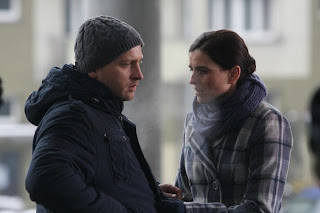 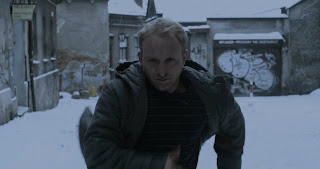 THE MOLE (Kret)                  B-
Poland  (108 mi)  2011 d:  Rafael Lewandowski
The Mole motion picture - official website.
This bears a strange familiarity with Jan Hrebjk’s recent Czech film Kawasaki's Rose (2009), as both explore the de-mythification of historical heroes that may have played an iconic role in establishing a free democratic society from the repressive chokehold of Eastern European totalitarian dictatorships, from an era when Poland utilized the Russian Communist interrogation and intelligence gathering methods of the Secret Police.  The director establishes a typical working rhythm of life in the present day, where the father and son, Zygmunt (Marian Dziedziel) and Pawel (Borys Szyc), live together and run a second hand clothing business buying up clothes in Northern France and then selling it in Southern Poland, requiring lengthy road trips abroad to regularly gather the merchandise, which has cut short Pawel’s wife Ewa’s (Magdalena Czerwińska) budding professional career, as she needs to stay home with their preschool age son.  Ewa is the daughter of a miner killed in the Solidarity miner strike riots of 1981 when a Communist police force intervened, leaving several miners dead, where she has been attempting unsuccessfully to seek compensation for the damages caused by the government’s actions, made more difficult as all the evidence has been destroyed.  Zygmunt shows outright disgust and contempt at the idea of continually looking backwards, though he himself was considered one of the union heroes of the strike.  This is another Polish film suggesting the nation can’t escape its past, a familiar theme in many of the former Eastern Bloc nations, where they remain connected at the hip with the dark days of the Soviets.
Pawel doesn’t share his father’s views about the past, where all the evils of the world are caused by Communists, but has been apolitical and knows little about his father’s past activities other than what is already widely known, where is family looks up to him as one of the nation’s heroes.  Purely by chance, on a cigarette run, Pawel sees a picture of his father on the front page of the newspaper with the word “Traitor” written across the photo suggesting he was a government informer, a “Mole” for the Secret Police during the Solidarity strikes, a charge his father vehemently denies to Pawel, but it doesn’t stop the press from camping out at their doorstep awaiting his official response which never comes, leading many to suspect he is complicit with the accusations.  Pawel remains troubled by his father’s response and the effect it has on Ewa’s family, who are outraged at his silence.  In this state of confusion, there is a renewed interest in a re-examination of just what happened, but Pawel is stymied in attempting to discover the truth, not knowing who to trust or who to talk to, as he has picked up the mantel of preserving his father’s reputation as it continues to be smeared by the newspapers.
This film beautifully evokes the paranoia of a witch hunting atmosphere where suspicion is rampant, where no one can be trusted, which suggest the fragile state of a budding democracy.  The film takes a more conventional turn using the sinister device of the original Communist Secret Service Agent, known as Garbarek (Wojciech Pszoniak), still miraculously living in Poland, but he must have been living under a rock somewhere, as he is the most despised man in the nation, apparently the only one who can unravel the truth about the Communist secret links.  But of course, why would anyone believe him?  The stability of the nation should never rest on the shoulders of a man like this, as he’d just as soon sell out his own mother, offering zero credibility.  Yet in this dramatic turn, all of Poland has its eyes on what a former Communist has to say about what happened thirty years ago when he was assigned to undermine and break the ranks of Solidarity.  This is, of course, preposterous, yet in this film a given, which suddenly turns into an action thriller, with Pawel on the run seeking to discover the truth.  Will he save his father’s reputation?  Will Poland ever come out from under the cloud of the Communist era?  And more importantly, will Pawel, where Borys Szyc is supposedly the nation’s most beloved actor at the moment, rescue the nation once and for all?  Was it ever in doubt?  This worked better as a surprisingly well-made quiet, psychological thriller, reflected through scenes of everyday life, where the identity of the nation and one of its heroes was in doubt, where the openness and accessibility of the government was in question.  That question, by the way, was never answered.
Posted by Robert Kennedy at 10:30 PM