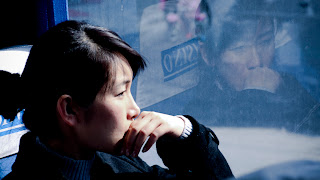 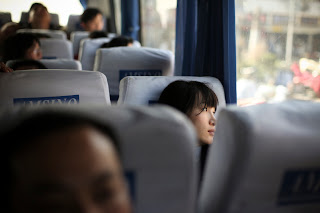 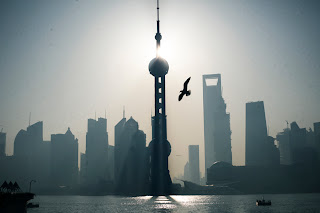 RETURN TICKET                  C+
China  Taiwan  (88 mi)  2010  d:  Teng Yung-shing         plum.asia |Return Ticket |
This is a confusing film and production, supposedly a joint Taiwanese and Chinese mainland film production, with Hou Hsiao-hsien’s name appearing as an executive producer, shot entirely in Shanghai, however, making no references whatsoever to Taiwan.  While the direction itself by a filmmaker known only for making commercials is spotty, having a few stellar moments, but also demonstrating clear sentimentalization by the finale, much of the overall confusion can be attributed to the use of 5 screenwriters whose stories together simply don’t mesh.  Instead, there’s an untold backstory that’s needed to help identify who the major players are, as instead they get jumbled together and it’s hard to tell them apart.  Using a format of no lead character, but several clearly identifiable parts, the central theme is one of returning home, where so many people do exactly that during the Chinese New Year that the cities empty with people all traveling back to their family homes during the festivities.  While this is a Chinese variation on a theme of The Help (2011), a portrait of the interior lives of domestic workers in Shanghai, nearly all from Fuyang province looking for a way home during the New Year, Shanghai is seen as a city of cutthroat sharks, where in business, there is no one considered trustworthy, not even your family, as knowing when and how to take advantage of others is a business decision, oftentimes highly profitable.  The city is shot, however, teeming with life, where the panoramic skyline oversees streets below that are overflowing with cars, bikes, buses, and pedestrians, not to mention street venders and peddlers of all sorts, creating an impression of a city bursting with life and activity.

At the bottom end of the social scale, there are people willing to do any kind of work offered just trying to survive, where scraping together a living is not always easy, especially considering the competition.  One young woman, Cao Li (Qin Hai-lu), arrives from out of town on a bus after a failed clothing venture and is offered a place to stay and a job as a domestic worker, but the middle aged woman who owns the house is nearly beaten up and labeled a foreigner for not being from Shanghai, so they’re looking to steal her share of the property out from under her sometime after the passing of her Shanghai born husband.  This kind of mob mentality suggests the Chinese are under relentless pressure to own real estate in choice locations, while the economic revitalization is spurred above and below by equally questionable high finance opportunities as well as black market offers.  Cao goes into business with a couple of street hustlers, the fast talking Guo (Li Binbin), an old family friend and his mute partner Jiuzi (Shen Yi-qun).  They plan to undercut the regular travel prices by providing a renovated stolen bus to Fuyang offering cut rates over the holidays.  This get rich quick scheme sounds tempting to the woman about to lose her home, where she may engage in smalltime theft of her own, stealing her tenants cell phone with stored numbers to available job opportunities.

There’s not much of a story except a driving desperation to get out of town to Fuyang using the cheapest method available, where even if they know they’re being tricked, this at least gives them an opportunity to get home.  Business seems to thrive on putting people in this position where they are desperate enough to be taken advantage of, even by friends.  There are several tiers of city shots, where the camera observes a view from the skyline, a cat sitting alone on a rooftop overlooking the busy streets below, where indoors pots are filled with steaming vegetables, while the claustrophobic housing quarters themselves are cramped and surprisingly tiny, where there is very little individuality on display except the means to out connive others.  Using a mix of street realism and low key comedy from the hustler duo, the music of a lone piano is initially effective for establishing the feeling of loneliness in a thriving metropolis, but by the end the director has added lush orchestration and even a manipulative pop song over the end credits, all of which feels fake and a surprising misstep in a film that has avoided cheap sentiment up until the finale.  According to the director, Hou Hsiao-hsien didn’t show up on the set until the final two days of shooting, and helped guide the director away from the camera and from making all the decisions, suggesting the entire ensemble needed to learn to trust each other.
Posted by Robert Kennedy at 12:10 AM