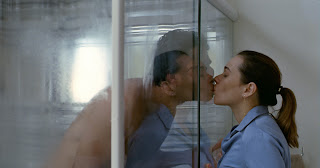 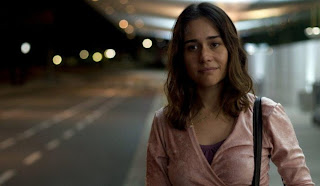 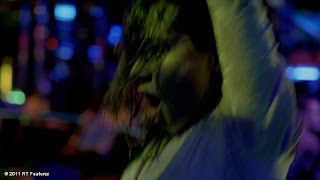 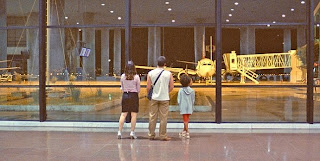 
When you left me, my dear,
You told me to be happy and well.
I wanted to die of envy, almost went crazy,
But afterward, as usual, I took heed.
If you want to see me again,
You're going to see me remade, it's true.
Eye to eye,
I want to see what you will do,
When you realize that without you I am doing so well.
I'm looking younger,
and catch myself singing for no reason at all.
So much has happened,
So many men have loved me
More fully and much better than you.
If by chance you need me one day,
You're always welcome, come over.
Eye to eye.
I want to see what you will say,
How you will bear it to see me so happy.

Aïnouz, who directed the unconventional MADAME SATÃ (2002) about the anguishing life of a drag queen, which won the Chicago Film Festival 1st Prize that year, has made a much more quietly conventional film here, set in the busy Rio de Janeiro district along the beach, where the viewer is immediately immersed in the noise and sidewalk rhythms of a thriving city, a neighborhood where the well-to-do live.  It’s here that we see middle-aged Djalma (Otto Jr.) make his way from an ocean swim to what appears to be a passionate morning sexual encounter with his wife Violeta (Alessandra Negrini) before heading out of town for a brief business trip.  All appears well in the world as Violeta sends her son to school and wanders through the same city streets on her way to work as a dentist.  Without notice and seemingly without reason, Violeta is blindsided by a phone message from her husband telling her that they’re marriage is over, which sends her reeling back out into the streets again, this time to a dizzying effect, where the city that appeared friendly and inviting in the opening suddenly feels harsh and threatening.  The mood shift is so starkly unbalanced that Negrini appears to be overacting, as where there was calm is now a storm, as she is simply unable to comprehend the impersonal nature of making such a life-altering decision on a phone message.

Like any woman of means, Violeta decides to hop on the next plane in search of her husband, but she’s frustrated to the point of disoriented at missing the last flight out, grabbing a cheap motel room nearby where she is immersed in the uninviting noise of city confusion, stepping into a neighborhood disco where they’re inexplicably playing the hyperkinetic Jennifer Beals music out of FLASHDANCE (1983), Michael Sembello’s “Maniac,” Maniac - michael sembello - YouTube  (4:05), where Negrini’s surreal out of body experience on the dance floor is indicative of her frantic, mind-bending state of anxiety, eventually thrust back out into the city streets, finding solace in the nearby beach.  Calmed somewhat afterwards, Aïnouz beautifully shifts the entire mood of the film, shifting the focus from Violeta who has commanded the screen for nearly the duration of the film to a young unidentified girl, Bel (Gabi Pereira), who seems surprisingly mature for her age, almost as if she’s living alone on the streets, where she seems to be handling life’s difficulties with more self-assurance than Violeta, where this meeting literally smacks her in the face like a jolt of reality.  As it turns out, Bel is with her father, Thiago Martins, and the two of them are living in his van, stopping at the nearby beach for ice cream.  The mood of doubt and confusion has been replaced by a curious fascination with discovering this playful young girl.

As this trio moves through the city together like newly discovered friends, the audience is treated to multiple tracking shots of Rio de Janeiro at night, dark but strangely luminescent, still pulsating with an undiscovered mystery that is the heart of every magical city, making this a love letter to the city where Violeta’s internal search for missing answers has been replaced by the soothing rhythms of Rio, beautifully captured on 35 mm film by Mauro Pinheiro (who might have shot this in ‘Scope), whose sensual images light up the screen.  There’s an underlying melancholic tone that continues throughout, where often nothing much happens, allowing extended wordless sequences to set the mood, with perhaps an overreliance at the end on what inspired the film in the first place, a 1976 song “Olhos Nos Olhos” (Eye to Eye) by Chico Buarque, Chico Buarque - Olhos nos Olhos  seen on YouTube (4:32), a kind of revengeful defiance following an abrupt end of a love affair.  The film does nothing surprising, but Negrini’s anguished performance is accompanied by a lush visualization of her internalized realm, something the director beautifully intermixes with the revelation of discovering the young girl, who seems to be the secret surprise of the entire film.
Posted by Robert Kennedy at 10:30 PM