The Skin I Live In (La Piel Que Habito) 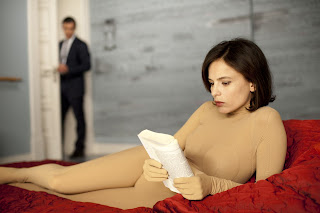 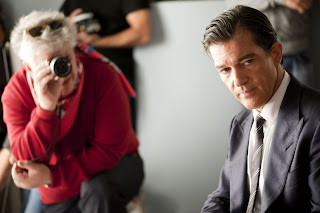 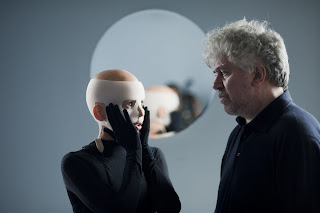 THE SKIN I LIVE IN (La Piel Que Habito)     D+
Spain  (116 mi)  2011  d:  Pedro Almodóvar
This is a wretchedly ugly film, using a sterile, medically antiseptic, super clean gloss along with a healthy dose of women’s naked breasts to disguise the fact that this is really a sadistically appalling subject matter, where one wonders what the attraction was in the first place.  Perhaps there is something inherent in the Spanish character going back to the Middle Ages that has a love for the grotesque, artistically speaking, from Velázquez and Goya to Gómez de la Serna and García Lorca, or more particularly the cinema of Fernando Arrabal which can be gruesome and revolting, showing sequences of extreme brutality.   Perhaps these are the aftereffects of enduring the darkly repressive Franco era, which was really a Fascist police state for nearly 40 years.  But that said, there’s really no excuse to deliver this kind of junk on the public, as there’s little to no redeeming value.  The film itself is very competently made and a welcome return for Antionio Banderas, who plays a wickedly sinister character with utter calm and nonchalance, a world renowned plastic surgeon who specializes in unorthodox methods, but also reports fantastic results, making him something of a God-like superman in the field.  And therein lies part of the problem, as Banderas exhibits a feeling of invincibility, where no power on earth can stop him from practicing inscrutable experiments, some of which recall the exploits of Burt Lancaster in THE ISLAND OF DOCTOR MOREAU (1977) or Charles Laughton in ISLAND OF LOST SOULS (1932).

What’s different here is rather than disfigured characters who reflect the barbaric methods of grotesque experimental surgeries gone wrong on human beings, each left in the garbage heap of mutilated scrap parts, Banderas is such a gifted surgeon that his patients become idealized pictures of beauty, yet his methods are the same, as he keeps a beautiful young woman Vera (Elena Anaya) locked up in a room at his estate like a prized guinea pig, practicing the most advanced, as yet untested, scientific techniques on her, supposedly with unparalleled results.  Almodóvar has a penchant for unseemly close ups that actually get too uncomfortably close to the subject, where the camera actually feels invasive.  Initially the viewer has no idea why she would be kept in a room like this, but when we see a gigantic, one way, wall-sized window in the good doctor’s adjoining room, where he can sit and observe his prized specimen like a living work of art, we’re quick to catch on.  There isn’t an ounce of character development anywhere in this film, so there’s simply no identification with the doctor or the patient, as neither are particularly appealing, nor is anyone else in the movie, creating a loathsome air of disgust with what’s happening onscreen.  The film only descends further into more revolting territory.

Almodóvar uses another trademark device featuring a fabulous artist performing live onstage, this time Concha Buika, a bisexual Spanish artist who performs a kind of flamenco jazz fusion onstage, singing two songs at an elaborately upscale party, but unlike earlier works where the artistic blend of cinema with other art forms like dance and music only enhances the experience, especially in the utterly sublime TALK TO HER (2002), this falls flat this time as Almodóvar mixes disturbing rape images during the middle of love ballads, which all but seals the deal of doom for this picture, where one considers actually walking out on this one, as is there nothing worth hanging around for?  And if truth be told, there really isn’t, as the back story revelations are equally disturbing, where it turns out the story itself just isn’t all that fascinating, where the overall experience offers little substance or meaning, but instead just grows more revolting.  It’s none of the actor’s faults, as they perform admirably, including Banderas who got an early start working with Almodóvar in MATADOR (1986) and LAW OF DESIRE (1987), but they haven't worked together in twenty-one years and he creepily inhabits the role, so the fault lies with the director, never pulling all the pieces together, never creating any tension or suspense, as the tone of this film fills the viewer with disgust bordering on complete disinterest, as there’s simply nothing to identify with here.  It’s all an exercise that takes place in a loathsome vacuum of dreary unpleasantness, easily the worst Almodóvar film on record.
Posted by Robert Kennedy at 4:55 PM