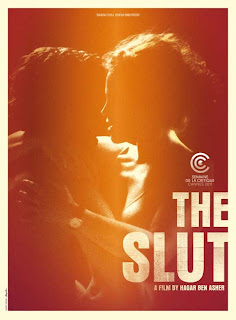 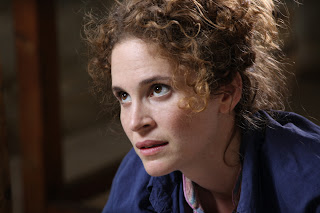 THE SLUT (Hanotenet)                       C
Israel  Germany  (88 mi)  2011  d:  Hagar Ben-Asher
Not sure how this ever got selected to play at Cannes, as the sensationalist aspects of the film eventually outweigh whatever cinematic merits the film offers.  Written, directed, and playing the lead, who is in fact a slut living outside town on a chicken farm with two daughters, routinely having sex with various men, who sometimes have to come back later when she’s engaged with another partner.  Hagar Ben-Asher obviously has a personal investment in this film, though one may question the point of it all, namely a woman’s right to remain sexually promiscuous, even as it negatively impacts on her daughter’s lives and their relationship at school and with the surrounding community.  Nowhere in this film are there any taunts about the kid’s mother, which surely would be one of the essential aspects of their youth, where a mother who subjects herself to continual sexual objectification would be the talk of the town.  Unlike Flaubert’s Madame Bovary, whose promiscuity was an attempt to escape the dreary emptiness of a loveless marriage, making a commentary on a deluded, self-satisfied bourgeois society, this film makes no attempt at social commentary, as Tamar (the slut) lives on the outskirts of town, where her male sexual suitors are the only villagers seen, so the town is all but absent, certainly an idealized portrait, as the reality would be much more brutally harsh, as surely the woman would be condemned and likely ostracized.  Instead, this film is largely seen through the window of the woman herself, as it’s her right to choose what she does with her life.  The question, then, is so what?  If she doesn’t care about the ramifications of her behavior, then why should we?  As a result, this film doesn’t have the impact intended, as it seems like a pointless exercise.
The filmmaking lends itself to authenticity and realism, where it’s a very credible portrait of living in the emptiness of the outskirts, as the surrounding unploughed dirt, various farm animals running free right alongside the caged chickens, and Tamar’s two free-spirited girls, Mika (Stav Yanai) and Noa (Daria Forman), who roam the countryside spending plenty of unsupervised idle time, reflecting a lifestyle outside the reach of society.  All this is well portrayed, as is the low key performance by Ben-Asher herself, bearing a resemblance to American actress Amy Brenneman.  The repeated occurrence of men popping up at her door gets a bit ridiculous after awhile, as there always seems to be someone else peering over the bushes, suggesting they may need to come back later, and unlike real life where they’d typically barge in anyway, where sex and violence go hand in hand, in this movie the men are polite about it and return sometime later.  The story shifts with the arrival of Shai (Ishai Golan), a veterinarian who runs his business alone, as no staff or helpers are ever seen, just a large number of animals to be treated.  Apparently the two knew one another awhile back, and he’s returned due to the passing of his mother.  Unlike the other men, Shai’s not in it just for the sex, as he enjoys the company of her daughters, and they take to him right away.
Shai appears to be a loving influence on everyone involved, sexy, good looking, reliable, dependable, and responsible, and in this film, that appears to be a problem, as this upsets the unattached, liberated amoralism of Tamar, who comes and goes as she pleases and is beholden to no one.  This is a strange option, but one chosen by the director who wrote the film, creating something of a deluded character that prefers all the extra baggage her choice entails.  The fights from offensive remarks at school, the rocks through the window, the wrath of the missing wives, the possible killing of her chickens, the social repudiation from town, even the identification of the missing fathers are all intentionally missing from this film, which are the social realities that accompany her choice.  The fact they are intentionally missing suggests this story is not grounded in social realism, but some other realm.  Unfortunately, without any backdrop provided, and nothing whatsoever offered about why Tamar behaves in this manner, she is instead portrayed as a wounded animal.  Sorry, but all metaphor doesn’t work in a supposed art film where ramifications matter.  A film isn’t made in a vacuum, so one supposes this may have some psychological or therapeutic value for this young director, as she’s perhaps healing from her own unidentified experience, as this behavior may reflect the personal choices of someone close to her, where writing this film may have been a cathartic exercise.
Posted by Robert Kennedy at 11:22 PM