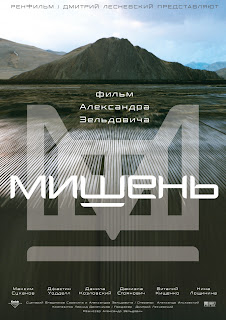 TARGET (Mishen)                               D
Russia  (154 mi)  2011  ‘Scope  d:  Alexander Zeidovich
An utter disaster in the making, dreadfully uninvolving, yet it’s two and a half hours long, which feels like an eternity, as this picture just never gets off the ground.  While it’s possible the Russian references are too oblique for a Western audience, as there may be specific phrases that a Russian audience would understand all too clearly, but as it stands, this is one of the worst films seen all year.  Basically, this is a futuristic rape fantasy, where what starts out as an intriguing idea unravels into a nightmarish chaos of uncontrolled anger and hostility.  Set in Russia only ten years in the future, the social classes are more divided, where the rich live in an extravagant luxury where they can afford anything, while the rest suffer offscreen somewhere, where their presence on earth is of little consequence, as they are only necessary to serve the rich.  While the influence of the United States is totally absent, China has become an Eastern superpower, a rival of Russia, where there is a transcontinental highway between the nations that is simply a neverending logjam of trucks where police swerve in and out issuing harsh penalties for alleged infractions.  In this altogether imperfect world, the super rich are always looking for ways to make their lives even better, where they can make a pilgrimage to a remote location near the Mongolian border, the site of an abandoned astrophysics station which allegedly receives cosmic rays, known as the “Target,” where those exposed, even for a short duration, receive everlasting youth, as from that point on they cease aging.  All right, so far, so good.
One feels there are likely smaller chapters to this story, where it might play out better in a serial installment Movie-of-the-Week format, where the element of suspense would create anticipated interest, as people would be curious what would happen next.  However in one sitting, the film grows prolonged without ever establishing any tension or suspense.  Vladimir Sorokin allegedly worked nearly a decade on this script, supposedly an underground take on Tolstoy's Ana Karenina (really?), but it falls horribly flat, evolving into exasperating dribble in spots, where all too many subplots get thrown into the mix, not one of which ever generates interest.  Part of the problem is the dreadfully unappealing characters that only grow more contemptuous over time.  Nikolai (Vitaly Krischenko) is the brutal Putin or Stalin figure, a man who crushes his enemies as head of the customs division, responsible for all transport of cargo, which of course is rampant with corruption.  Viktor (Maksim Sukhanov) is a Russian Minister of Natural Resources, a man living in European extravagance with a much younger trophy wife, Zoya (Justine Waddell).  Also along is Zoya’s brother Mitya (Danila Kozlovskiy), an obnoxious Reality TV host with impressive looks who takes an interest in Anna (Daniela Stoyanovich), who runs a radio show on learning Chinese.  Zoya ends up infatuated by Nikolai, where each relationship becomes unhinged due to arousing suspicions and paranoia.
It turns out there’s little science fiction to this tale, as most of that plays out in anticipation of what the viewer expects, where the consequences of the visit has a Macbethian theme, a feeling of invincibility, which initially feels powerful and irrefutably ecstatic, near delirious, developing a ravenous appetite for animalistic sex bordering on brutality, descending into obsessive anxiety about the partner, while in some instances it feels like the brain ceases to function, where a switch overrides all reason and the world is divided into good and evil, where lengthy philosophical quandaries may turn to mush, absolute nonsense, as there are apparent unexplained side effects of the experience that overtake the initial euphoria of everlasting youth.  The problem here is that the story lacks vision or insight, as the usual view of Russia is that it is a country defined by a strong and powerful leader, something of a dictator who holds everything in check, where if you remove his influence and toy with the idea of democracy, for instance, the country will immediately descend into chaos.  Well this is not science fiction, this has been the view of Russia for the last several hundred years, so to reiterate this fear is hardly something new.  While there are a few ravishing location shots, cinematography by Alexandre Ilkhovsky, the mostly discordant music is something of a headache, as is the complete unengagement of the characters that couldn’t hold less appeal.  When the screenwriter resorts to babbling nonsense, as if characters have been subjected to electroshock, where life ceases to hold any meaning, it feels strangely like a completely humorless and continually dour apocalyptic version of THE INVASION OF THE BODY SNATCHERS (1956).
Posted by Robert Kennedy at 12:30 AM