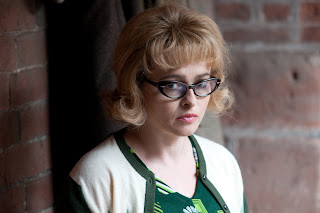 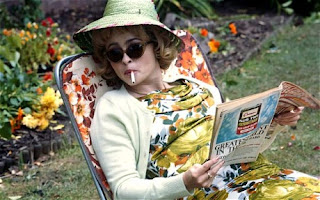 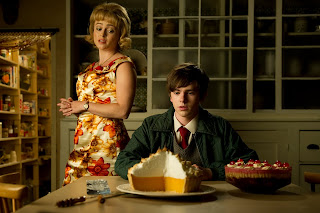 TOAST                        C
Great Britain  (96 mi)  2010  ‘Scope  d:  S.J. Clarkson
A difficult movie to appreciate as it feels badly conceived and overly sloppy, never sure what it was intended to do, as this is based on Toast: The Story of a Boy's Hunger, the memoir of Nigel Slater, a culinary writer and Food Network TV host, Britain’s answer to Julia Childs, as seen through his eyes starting as a young 9-year old child.  Apparently food deprived since birth, as Nigel’s mother (Victoria Hamilton) hasn’t a clue in the kitchen, whose idea of dinner is boiling whatever comes in tin cans, where the ironic title comes into play when she allows the water to evaporate, actually burning the contents “inside” the cans.  On those occasions, her perky reply is:  “Well, there’s always toast!”  This film was initially shown on British TV in late December where it was an unqualified success.  On the screen, the film is inexplicably shot in ‘Scope, though there’s rarely any cause for it, as much is shot indoors in the ugly and grimy home of Nigel’s completely tasteless parents, the kind of four walled home where the wallpaper has never changed from the original owners a half century ago.  While the movie version projects Nigel as an only child in the 1960’s, he apparently had two older brothers who were completely left out of the movie.  Instead, Nigel has a perfectly miserable childhood, where his father (Ken Stitt) takes grumpy to new heights, as he’s downright hateful to his son, always yelling and losing his temper, blaming him for everything that goes bad, apparently stressed and overly worried about the declining health of his wife, who has failing lungs, exacerbated by the increasing stress around the household.
Part of the problem here is that the characters are so self absorbed there’s little sympathy for any of them, including young Nigel, who’s ridiculously spoiled and self-centered, never allowing any leeway for his mother’s medical condition, always making it about himself, which in the eyes of the audience makes him a horrible little wretch.  Yes, his father is belligerent and a blowhard, but his mother is generous to a fault, but simply hasn’t the energy to spend with her son.  The parents are never straight with him about her illness, or about anything really, so he always gets his hopes up that things will be better, then is terribly disillusioned when things don’t work out the way he’d hoped, becoming extremely disappointed to the point of hateful towards both parents.  Nigel is spiteful and contemptuous of others, especially those closest to him, never showing the least amount of concern or empathy for others, becoming a serial whiner in a movie where he’s the lead.  This doesn’t bode well for the audience’s sympathy, which is rare for a child lead actor, who almost always generates plenty of sympathy, even under the worst of circumstances, except Patty McCormack in THE BAD SEED (1956).  He never wins the confidence of the audience, so when he loses his mother at age 9, leaving him alone with his obnoxiously overbearing father, there’s still some question why this has been turned into a movie, as there’s little interest generated onscreen.  Easily the best thing in the picture is the use of Dusty Springfield music, allowing some songs to play through the duration, which couldn’t feel more gratifying, as she’s an extraordinarily heartfelt singer.
Enter the indomitable presence of Helena Bonham Carter, thankfully, as Mrs. Potter, whose onscreen/offscreen eccentricities are a constant delight, though she arrives much too late to save this picture.  Because of her immediately recognizable image, perhaps an early, amusing, foreboding hint may have helped, like almost being hit by a bus or something while Nigel completely unawares continues along his usual shopping excursion.  Both father and son find it hard to take their eyes off her as she’s an uninhibited, cigarette smoking, floral dress wearing washer woman who cleans while exposing her garters and stockings, along with high heels.   Without any backstory, she takes over the household with her aggressive personality and phenomenal ability to cook, sending Nigel into a jealous swoon, as she’s the complete opposite of his mother, just adored by his father, which is more than Nigel can bear.  He thinks of her as a disaster, or as some horribly amoral creature, yet without her presence, there’d be little reason to watch this film at all, as she completely upstages the little brat, who is continually harping on her deficiencies, as she’s considered “common,” out of her social class, yet defies all ill mannered insults hurled her way by having superpower knowledge of culinary and cleaning skills.  Rather than adore her, since that’s Nigel’s interest as well, he spends the rest of the film hating her too.  The problem here is that he’s such an insufferable bore, an ill bred kid that doesn’t give a rat’s ass about others and who doesn’t at all have the unhappy life that he continually insists he has. The film dwelling so much of the time on his self-inflicted misery just sends the wrong message, as by the time we see early signs of his blossoming career in the kitchen, he’s not the one we’re interested in.  The focus is always elsewhere where our hopes are continually dashed in some of the more underdeveloped characters or storylines that receive short thrift.
Posted by Robert Kennedy at 11:56 PM