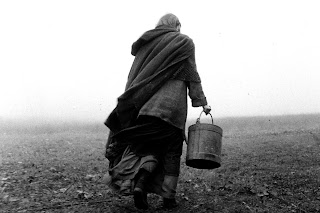 Béla Tarr on the set 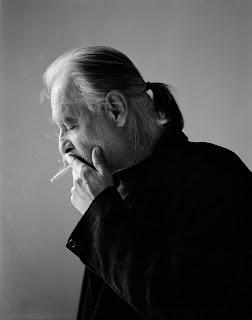 THE TURIN HORSE (A Torinói ló)                 B-
Hungary  France  Germany  Switzerland  USA  (146 mi)  2011  d:  Béla Tarr
What is this darkness?                —The Daughter (Bók Erika)
Béla Tarr’s windswept vision of the coming apocalypse, where the world begins to shut down, which he calls his most radical work, most likely his final utterance as a filmmaker, like his last will and testament.  One thing you can say about Béla Tarr, he is a master of the long shot, as evidenced by his first few shots, which are lengthy tracking shots following a horse drawn wagon that swoop in and out several times, seemingly just under the chin of the old, weather-beaten horse, then fading back to the side in a medium shot that easily lasts over 5 minutes.  Supposedly using 30 shots in all in a two and a half hour film, Tarr is brilliant at composing and choreographing shots, much like Tarkovsky’s masterful house fire sequence at the end of THE SACRIFICE (1986), where 7 or 8 minutes into the shot the camera is moving and discovering something new that wasn’t there before.  Similarly, Tarr moves his camera in and out of rooms or buildings, where the shot evolves into the art of inquisitiveness, where the viewer is constantly questioning the world onscreen.  Here the wind is howling throughout, accompanied by a monotonous funeral dirge by Mihály Vig that never changes, but continually fades in and out of the movie.
Besides the horse, there are only two characters, an aging, one-armed father (János Derzsi), who complains bitterly throughout, mostly barking out orders to his daughter, Erika Bók, who played the young girl playing with cats in SÁTÁNTANGÓ (1994), having grown up somewhat through the passing of the years.  There is a brief narration that informs the audience of the poetic descriptions in the passing of time, where the film depicts six passing days.  Mostly they sit in their remote country cottage, either lying down or staring out the window, where each venture outside is into a blustery wind that spells the end of the world.  What happens is near wordless, marked by intense repetition, taking their clothes off at night, putting them back on in the morning, going outside to fetch water from the well, cooking potatoes, eating (including peeling) boiled potatoes with their fingers, while the father will take two swigs from an alcoholic concoction.  There are passing events, but they are minimal, as a visitor comes for alcohol spouting theoretical philosophical utterances that may or may not sound convincing, but mostly he howls that the world is in ruin.  In a somewhat amusing sequence, Gypsies come to borrow water from the well, and anything else they can get their hands on, who may as well be demonic Angels from Hell making their pronouncement of doom, but are run off by a bellowing ax-wielding father.
Etched in miserablism and darkness, it is reminiscent of the final scene in SÁTÁNTANGÓ where the doctor begins to seal himself in, cutting out all light from the outside world.  Inside their cottage there are only glimpses of light, a window to the outside world, and an oil lamp at night.  They soon discover the well dries up, a calamitous event where they pack up all their belongings in a wagon and make the long walk to the distant horizon, fading over the other side of the hillside, holding the shot for another minute or so, as they soon return, their spirits crushed, the world outside crumbling.  They can’t understand why the horse stops eating, yet they are forced now to eat potatoes raw, where all hopes for the future are fading.  The pervasive darkness is overwhelming what’s left of their lives, where nothing works any more, nothing can be explained, everything is shutting down, and the apocalypse is upon us.  Even the wind dies down, as it’s not needed anymore.  Nothing is left.  Only the darkness.
Posted by Robert Kennedy at 11:08 PM