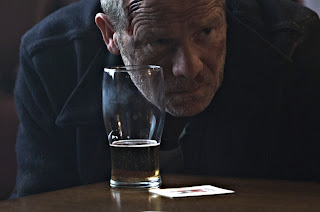 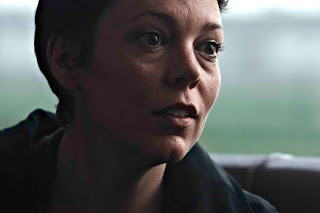 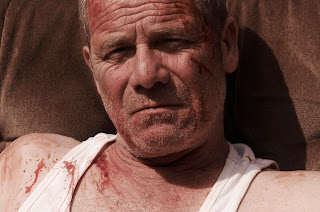 TYRANNOSAUR                   B
Great Britain  (91 mi)  2011  ‘Scope  d:  Paddy Considine
This is another punishing film where it may take some time to recover afterwards, written and directed by English actor Paddy Considine in his first feature, starring Peter Mullan in another one of his dramatically heavy, wounded soul roles, playing Joseph, a tragically damaged loner subject to excessive drink and violent mood swings, where in the opening few moments we already think of him as one of the most despicable characters we’ve seen onscreen for awhile.  His profanity-laden invectives hurled at anyone happening to be in the vicinity are his norm, where he’s apt to call anyone he doesn’t like a “cunt,” and there’s barely anyone, including himself, that he likes, so the man is at it all the time.  In his rough and tumble neighborhood, occasionally people strike back, blindsiding him, threatening him, hitting him harder than any man can bear, but he grins and bears it, refusing anyone’s help.  In this film, however, he meets his match in Hannah (Olivia Colman, a revelation), a Christian woman working in a used clothing shop, a complete stranger who offers to pray for Joseph, and then gets down on her knees to pray, which is like being tapped on the shoulder by the Angel Gabriel and reminded of the coming apocalypse, as there’s no place else he’s heading.  Joseph finds her naively pathetic and rails against her wealthy upbringing, the kind with all the advantages leaving the rest of the poor sots to deal with the real troubles in the world—another typical Joseph rant filled with cruelty and more profanity.  But after another wretched night that leaves him battered and bloodied, he wakes up on her doorstep the next morning, but by now she’s heard enough of his ravings and is not in the mood for more.
Unraveling much like a play, the unique lives of these two couldn’t be more radically different, where Joseph wears his troubles on his sleeve like a badge of honor while her equally pathetic world is hidden from everyone except her abusive husband James (Eddie Marsan), the one inflicting the blows, an unsightly picture of a hateful man that her family thinks is perfect, all happening inside the comfortable confines of their perfectly manicured middle class home.  When a black eye arouses suspicions, Joseph is the only one who notices, but he’s not the kind of guy to get involved in other’s affairs as he has enough battles to contend with, including a hot-headed neighbor with a vicious pit bull that he keeps threatening to let loose on him.  Joseph sees enough abuse right across the street when his mother’s boyfriend allows his prized pit bull to continually terrorize her son Samuel, Samuel Bottomley, a young kid who spends his entire life outdoors playing on the curb as a result, where he couldn’t be more pleasant and communicative with all the neighbors, hating it each time he’s called into his home to face that monster of a dog.  So all Joseph can do is offer Hannah a drink, where inside an empty bar on some quaint afternoon, she looks around and views “his world,” not much to look at, but filled with plenty of unexpected surprises when a friend or two of Joseph drop in, all using the exact same expletive riddled profanity that is barely understandable to anyone else but makes perfect sense to them.  So while Hannah gets a glimpse of Joseph’s world, where it appears he’s not such a bad sort, her troubles behind closed doors only escalate into the most vicious kind of human savagery that defies knowledge and human understanding, where she’s done nothing to provoke this kind of madness, the man is simply a beast.
While Mullan and Colman are putting on a masterclass of acting, where the theme of rage and helplessness appear to be intertwined, Joseph is also paying visits to his terminally ill father who is on his death bed, another brutal man who regularly beat Joseph’s sister Marie (Sally Carman), something she never lets her brother forget as he never came to her rescue.  His wake is the high point of the film, as everyone lets loose, where there is singing and dancing along with endless rounds of drink, where all the disturbances of the world seem to be a distant memory, at least for that one wonderful moment, until they have to walk out that door and face the world all over again.  Joseph knows he’s too far gone to be of any use for anyone, "No one's safe around me," and Hannah is just too far gone, where the intensity of their human dysfunction is resounding, where the turbulence of her supposedly sheltered world only escalates, as does the frenzied violence right outside his front door.  This is a film that examines the wreckage of human devastation, where every act is a response to violence or the threat of violence, an endless series of catastrophes that seem to define human existence as a kind of barbaric and prehistoric world, as we have barely evolved since the days dinosaurs walked the face of the earth, still roaring and thundering as we go, filled with a silent rage at the endless futility of it all, as if God stopped listening or caring, something we all have to face in our seemingly pathetic lifetimes.  This may be more than some can bear, as it’s a kind of gloomy endurance test, but it’s also a reminder that just when you think you’ve got it bad, someone else has got it far worse.
Posted by Robert Kennedy at 1:29 AM