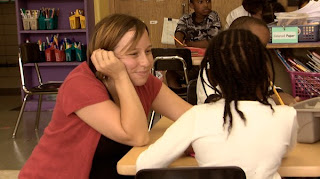 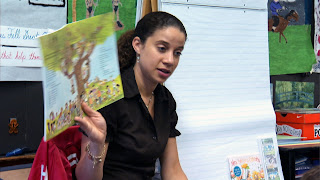 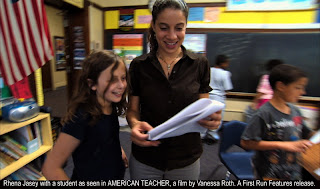 AMERICAN TEACHER                     C+
USA  (81 mi)  2011  d:  Vanessa Roth and Brian McGinn                     Official site
Seen in a theater jam packed with teachers, this is basically a walking advertisement on behalf of teachers, though one which advances several compelling stories of teachers, which is easily the most dramatically impactful part of the film, as these are truly dedicated and nurturing teachers who demonstrate beyond anyone’s expectations what teachers can be if given the chance.  In a perfect world, they would be doing what they love, but due to the under appreciation factor in American society which continually devalues the work of teachers, used as a battering ram of relentless criticism by the political right, they are a grossly underpaid working group, and because of the deteriorating pay scale, the employees have become nearly 85 % women, as men have exited the system in droves.  No longer able to earn a living wage, nearly a third of teachers are forced to take a second job, which jumps to nearly two-thirds when you include compensated after school activities like coaching, extra time away from home that jeopardizes the stability of their marriages and family, as they are basically at work all day and night with little chance of seeing their family and still have troubles making ends meet.  Teachers that have their own babies are forced to return to work too soon, where they jeopardize their own health from sleep deprivation, as they are no longer able to take care of themselves when they are devoted to classrooms, school preparations, and taking care of their own babies which require feeding at all hours of the night.  But the real character of these chosen few teachers is shown in what they can accomplish in a classroom setting, where one with a Harvard degree states simply that very little time is actually spent teaching, that more time is spent talking to kids, offering encouragement, resolving problems, performing parenting or social service skills, where they are constantly required to intervene and make quick decisions in a daily crisis mode.
The film makes no reference to the political realities of shrinking funds for public schools, never mentioning the impact of teacher’s unions, where the right wing has all but declared war on public schools and their teacher’s unions, lowering taxes, developing an uncontrollable love for charter schools as a quick fix, where few if any are unionized, putting teachers at risk if they work there long enough, as they will eventually price themselves out of the market, as they do at the Big Box economic model, forcing the hand of the school boards that layoff well paid staff and hire someone fresh out of college for significantly less pay.  This is the business model for how American workers are treated in general, as there is a small window of opportunity before the higher salaries make the employee unaffordable.  Success contributes to their own demise.  Again, the film makes no reference to this impending economic disaster waiting somewhere down the line due to the economic instability within the states themselves to adequately pay for public schools. Instead they reveal an idealized charter school system called TEP (The Equity Project) TEP Charter - The Equity Project Charter School that actually exists, paid entirely by public dollars, where teacher salaries begin at $125,000, nearly double the national average, with an additional $25,000 bonus.  What the film leaves out is that TEP teachers work twice the hours of a typical teacher, are expected to take on additional responsibilities, and pay for their own health benefits.  There is no case made whether this is a workable alternative, instead it is used as a Nirvana like example of an existing system where teachers are actually treated with respect and paid accordingly.  The Harvard teacher applied for a position, one of over 600 applicants for only 8 jobs, and was accepted.
What the film also shows is nearly half the teachers leave the system within 4 years, 20% of urban teachers quit every year, where their initial optimism is met by the petty bureaucratic realities, where they are routinely taken advantage of, expected to do so much more but without any additional incentives or compensation, where the realization kicks in that they can’t afford to live on this salary, as over time it’s not expected to appreciably increase.  As a result, there is a high turnover of new teachers, a model that consistently destabilizes the effectiveness of the classroom, where kids can grow attached and even expect help from teachers with their real life issues.  When they suddenly disappear, this may have a drastic impact on their still developing lives.  Perhaps the scene of the film shows a bright and energetic black female student who’s extremely fond of a black male teacher, claiming they talk all the time about everything, but when he suddenly disappears to change careers, as he can make twice the money in the real estate business, she is shattered by his absence, one of the few if not the only black role model in her school. Nonetheless, when one of her parents dies a few years later, he is the only one who calls to reach out for her during this time, a shocking revelation of personal connectedness that reveals how teaching is so much more than an 8 hours a day job, how it’s a lifelong commitment to these kids.  In nations with what is considered the best education systems, Finland, South Korea, and Indonesia, teachers are considered career professionals with earning power equivalent to or even exceeding doctors and lawyers, where very few ever leave the system because they are so well compensated and also recognized by society as among the most valued and worthwhile professions, where it would be unthinkable, for instance, for teachers to have to reach into their own pockets to purchase books or school supplies for their classrooms, something that 9 out of 10 American teachers are routinely forced to do.
Posted by Robert Kennedy at 9:39 AM