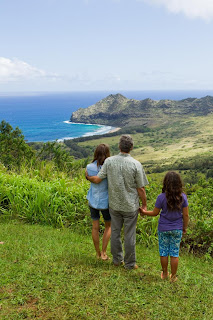 THE DESCENDANTS                        B+
USA  (115 mi)  2011  ‘Scope  d:  Alexander Payne                  Official site
One of Payne’s better films, where the spaciousness of his canvas is particularly appealing, as the Hawaiian setting here is idyllic, certainly a change of pace from the rat race of our normal lives, where we should be so lucky to have these kinds of inheritance problems, but one wonders what the infatuation is for lifestyles of the super wealthy, which seems to be an American and European fascination at the moment while the reflective economies are in a terrible downturn - - see von Trier’s MELANCHOLIA (2011), Almodóvar’s THE SKIN I LIVE IN (2011), Assayas’s SUMMER HOURS (2008) or Woody Allen’s MIDNIGHT IN PARIS (2011).  Based on an adapted screenplay from a novel by native Hawaiian Kaui Hart Hemmings, who herself has a role as Clooney’s secretary, the story concerns the coexistence of natives and whites in modern day Hawaiian society, suggesting they bear a responsibility in deciding what to do with the original lands of the indigenous past while also cultivating a need for development in a rapidly changing modern society.  Apparently large amounts of land continue to be held in trusts that were set up more than a century ago by the families of Hawaiian royalty.  Under a law called the rule of perpetuities, individuals, as opposed to charitable organizations, have until a specific date to act upon these trusts.  This is a backdrop for the story of Matt King (George Clooney), the hapa-haole (half-white) heir of a prominent Hawaiian landowning family that married into 25,000 acres of unspoiled land 150 years ago that now stands to make a bundle if they agree to sell off their shares.  However, much of what makes Hawaii so uniquely gorgeous has disappeared beneath a blitz of high end housing development for more hotels, condominiums, and luxury resorts, the kind of thing that makes a few people very wealthy at the expense of the pristine beauty of the island.  Many of the same questions were raised by Olivier Assayas’s SUMMER HOURS, where the heirs of the French aristocracy were too busy in their impersonalized modern lives to concern themselves with their family or the nation’s legacy, forgetting how influenced they were in their own childhoods by their seemingly unlimited and unending cultural access.
Payne has crafted an irreverent but very low key approach that follows flawed yet original characters, highlighted by Clooney’s beautifully understated performance, a guy that appears out of nowhere to suddenly take an interest in the family he’s otherwise neglected for his own business adventures through the years.  However he’s called into action due to the medical emergency of his wife who ends up in a coma from a boating accident.  When her condition is not expected to improve, he’s forced to confront his two daughters, Shailene Woodley as Alexandra and Amara Miller as Scottie, both offering spirited performances, showing unusual range of expression without falling into the typical family cliché’s.  King also has to contact the friends and extended family at the same time he’s considering what to do about the family trust.  His lifelong retreat behind the safety net of complacency is suddenly called into question, made even worse when his daughter reveals her mother was having an affair.  Like a house on fire, King has to decide what’s worth saving and what he has to let go.  Quiet and surprisingly tender, there’s a healthy dose of humor mixed with pathos wrapped up in the tragic circumstances, where the revelations slowly reveal themselves and only grow more poignant, becoming more personalized with the growth of the characters.  While it’s first and foremost a family drama, one can’t help but see the broader implications and how it reaches into the lives of all Hawaiian citizens.  King understands many resent his inability to connect to his indigenous past, yet he’s the one that stands to make millions from land that never actually belonged to him or his family, but was entrusted to a vision of an idealized Hawaiian future.
With brief autobiographical narration from King, what’s intriguing about his character is that he continues to play someone who is himself still developing into the person he is becoming, changing skins, making room for adjustments, experiencing a myriad of emotions from anger, confusion, sadness, the loss of parental authority, to suddenly finding himself alone without a partner, where he has to come to terms with his wife’s betrayal of her own family, all told in a tone that mixes humor with heartache.  Payne carefully sprinkles the family with notable eccentrics, but also shows the serious family portraits that have been hanging on the walls for generations.  Raising questions about assimilation and cultural identity, all of the music in the film comes from Hawaiian artists, where one was even written by Liliuokalani, Hawaii’s last queen.  The director never intends to overwhelm the viewer and refuses to resort to stylistic tricks of the trade, but infuses knowledge with the setting, where the audience is treated to an overview of the family legacy, plush green cliffs with plenty of vegetation overlooking the white sands of an undeveloped beach, a place that has remained as is for literally thousands of years, a portrait of everlasting perfection.  The natural beauty is an interesting contrast to the pervasive sadness of the story, which features a woman dying, who’s already been declared brain dead and has left instructions to remove all life support.  Despite all the unique twists that make you think otherwise, this is a horribly downbeat story that has a sobering effect on everyone, a wake up call that suggests this could be anyone, that life is short, that we have an obligation to rethink our lives in the truest, most moral sense and reconnect with those that matter the most to us.  Fortune may be intertwined with fate, but the choices and direction of our lives still belongs to us and we should never betray that most precious gift.
Posted by Robert Kennedy at 5:17 PM