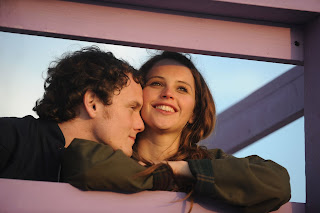 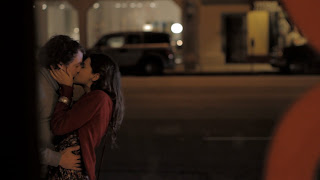 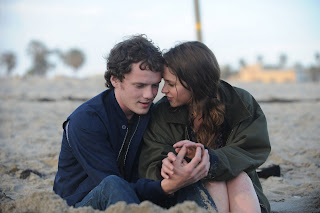 LIKE CRAZY                    C
USA  (90 mi)  2011  d:  Drake Doremus
Inexplicably, this was the film that won the prize for Best Dramatic Film at Sundance this year, while Felicity Jones also took home top honors for Best Dramatic Actress.  Having already seen MARTHA MARCY MAY MARLENE (2011) just a week ago, which won the Best Director prize and is easily one of the best films seen all year, one can only scratch one’s head in disbelief, as a Jury consisting of actress America Ferrera, film critic Todd McCarthy, noted cinematographer for director David Gordon Green, Tim Orr, and directors Kimberly Peirce and Jason Reitman made this choice for a film that bears no semblance of greatness.  In fact, this is a barely tolerable film, feeling overly formulaic, filled with standard cliché’s, very much in the mode of mediocre television, where one of the biggest problems is the insipid dialogue, much of it supposedly improvised, and the fact that the lead actress can not carry the film, as her maturity level is more appropriate for Gossip Girls.  What this feels like is Bridget Jones, the Early Years, as lead actor Anton Yelchin bears some resemblance to a younger version of Colin Firth, and the film makes such a big deal in the beginning about a whirlwind, rhapsodic love affair that never actually materializes, as they rarely, if ever, actually talk to one another.  Instead they’re seen in the typical montage of happy moments, smiling on the beach, ramming one another with go carts, staring at one another over coffee, reading aloud personal poetry in bed about “the semi-precious eagerness” of feelings that lead to embraceable moments under the sheets, plenty of “I love you’s,” which turn into fast speed sequences (still in bed) which show the dizzying joy of happiness.  Since all this comes in the opening half hour of the film, that leaves only one direction to go, and this film uses the standardized formula that has been used in the television industry since its inception, episodes that begin sad end happy, and episodes that begin happy end sad.  That’s the generic system and this film makes no effort to break from the norm.
There’s nothing in this film that you can’t find on television, as it’s never dramatically involving, and it never evolves to anything more complex than what you see onscreen, as the material remains on the surface level throughout.  The couple is likeable enough, British native Felicity Jones as Anna attends college in LA studying writing while local boy Jacob (Anton Yelchin) has a thing for building furniture.  He enjoys hearing her read some of her writings which sets the romance in motion.  But she’s on a Student Visa which requires a return to England after she graduates, which she and her family talk about and plan for, discussing all the ramifications, which everyone expects is a mere formality, where she can return again using a Tourist Visa.  But love is in the air, and youth, where literally the morning of her departure she decides at the last moment that she’s much too in love to leave, over-extending her stay.  Now this is a college graduate we’re talking about, with smart parents, where only a fool fails to understand how deep rooted the post 9/11 problems of immigration are in the United States, where the issue is tossed around like a political hot potato, everyone trying to get tougher than the rest.  But love is bliss, leaving the poor girl stranded in a holding pen after a brief visit back home as she attempts re-entry to the States and is immediately returned to Britain.  Some people are locked up in prison or detention centers for years as they sort out the intricacies of their immigration status which can remain in limbo for years.  For an excellent film on that subject see the British film LAST RESORT (2000) or the American film THE VISITOR (2007).  Those films express real personal dilemmas, so it’s hard to feel sympathy for a spoiled kid with a teenage maturity level that intentionally chooses to ignore the consequences of her decision.


Nonetheless, this is not an exposé on immigration, but turns into a long distance, trans-Atlantic romance, where Jacob opens his own furniture store while Anna gets a job writing for a magazine blog, where Jacob’s forced to travel to England if he wants to see her, where all signs suggest the heat has gone out of their relationship, as he senses something is weird, and it is, as she all but ignores him in front of her friends, but he doesn’t trust his own instincts.  This back and forth dilemma becomes repetitive, as America refuses to drop the ban on Anna’s travels into the country, so she is effectively exiled back to her own country, where she has friends, family, a job, even a boyfriend, and a life.  Meanwhile Jacob has a girlfriend of his own, the incredible Jennifer Lawrence from WINTER’S BONE (2010), who kicked ass in the Ozarks and is now devoted to him.  What’s there not to like?  Rather than choose the obvious, Jacob is stuck in this circular chain of events that just goes from bad to worse, all supposedly in the name of love, where he drops everything to reunite with and accommodate a girl he no longer loves and probably never loved in the first place.  So much is made of their supposed craving to reunite, which continues throughout the film despite the fact both have significantly moved on with their lives and there’s absolutely no sign of passion between them.  In fact, other than brief text messages they barely contact one another, yet in the throes of tunnel vision, they continue on the hope they will feel the same way they did when they graduated school.  But several years have passed, a fact the writers of the film simply fail to acknowledge, as time changes the way people feel.  The last two-thirds of this picture feel endless, continuing to repeat the same cycle of frustration and then having to move on with their lives, where the two barely have anything to say to one another, yet then on the spur of the moment they drop everything to get back together again.  This film fails to ever establish a reason to care about either one of these individuals who are simply never fleshed out as characters but remain one-dimensional cardboard cut outs, never for a second relying upon any hint of naturalism..  One is at a loss to comprehend what others are seeing in this film, as it is a blandly artificial exercise of mediocre acting and poor script writing that never rises above average.
Posted by Robert Kennedy at 2:48 PM