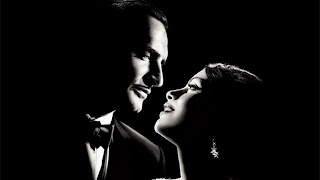 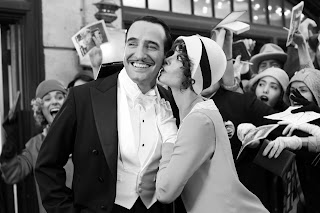 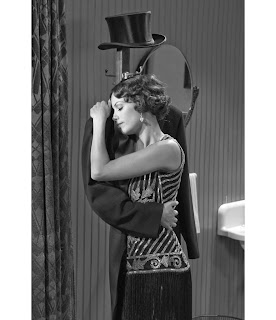 THE ARTIST               B+
France  Belgium  (100 mi)  2011  d:  Michel Hazanavicius         Official site [ca]
Despite the unapologetically nostalgic tone of a silent era film that accentuates Hollywood cinema in its golden age, along with its dashingly handsome and debonair stars, like swaggering silent star George Valentin (Jean Dujardin), this film, along with Scorsese’s holiday release HUGO (2011), both eloquently pay tribute to a magical era of early cinema.  Set in the late 20’s and early 30’s, coinciding with the SINGIN’ IN THE RAIN (1952) shift from silent to talking pictures, the camera initially adores matinee idol Valentin with cameras and news items following his every move, living in a posh Hollywood mansion with a wealthy socialite wife Doris (Penelope Ann Miller) who’s too bored with show business that she spends her idle time marking up movie posters with graffiti-like mustaches and goatees, her caustic comment on the whole world of entertainment, rarely uttering a word to her husband.  This dysfunctional portrait of marriage is a satiric comment on Myrna Loy and William Powell’s supposed marital bliss in THE THIN MAN (1934), right down to a theatrical scene-stealing pet dog Uggie, who is a stand-in for Asta and all but steals the picture.  Valentin’s breakfast table scene mimicking the dog’s every move is a classic silent era comedy routine, but his wife couldn’t be bothered to even notice.  Valentin never lacks for a smile, exuding confidence and generosity from the outset, beautifully expressed in a spontaneous moment at a publicity appearance where he is accidentally bumped by a woman who drops her purse while standing in a cordoned off crowd of fans and well-wishers, where at first he expresses rude indignation at the insult, unwanted physical contact, but when he sees what a lovely and charming woman it is (Argentinean actress living in France, Bérénice Bejo, who happens to be the director's spouse), he immediately turns into the gallant gentleman, where their pictures are all over the Hollywood tabloids the next day.
From this simple coincidence, A STAR IS BORN (1937, 1954, 1976), so to speak, as the lovely lady is Peppy Miller who suddenly lands a job working with Valentin on a picture as a chorus line dancer, nearly thrown off the set by movie mogul John Goodman, the cigar chomping movie producer who blames her for the little stunt which took the actual movie being promoted off the front page, but he relents when Valentin insists she belongs in the picture.  While the two obviously have chemistry, their careers are on different paths, as talkies are the new thing, introducing ambitious young talent like Ms. Miller, while Valentin’s career is all but over, though he refuses to believe he can’t draw an adoring public.  When the stock market crashes and the Depression hits, people show little interest in the way things used to be, despite Valentin’s insistence that he’s an “artist,” not some puppet on a string.  With his marriage on the rocks, his career in ruins, his fortune lost, he becomes a sad and destitute man, still unable to comprehend the chaotic madness of noise associated with talking pictures.  His much more organized silent life seems enchantingly simple, where all he has to do is perform before adoring fans to win their hearts, where he’s a natural born charmer.  Making matters more interesting, the film is actually silent in Valentin’s world, where sound is slowly and cleverly introduced, which others accept, where they eventually live in a world of sound, but Valentin and Uggie remain steadfastly silent.  The film effortlessly walks a fine line between the two worlds, where the unrecognized and distant love between the two stars remains confined to silence.
The real magic of this film is an old-fashioned romance set against a backdrop of a continual stream of homages to different film eras, where Valentin begins as a 1920’s swashbuckling Douglas Fairbanks hero, where his Chaplinesque comic routines or enthralling Fred Astaire dance numbers are utterly captivating, but when his luck fades, he’s a down on his luck fading movie star lost in the decaying psychological cobwebs of SUNSET BLVD. (1950), filtered through the alcoholic doldrums of meaningless despair from THE LOST WEEKEND (1945).  What’s truly remarkable is actor Jean Dujardin’s range of ability in wordlessly conveying each of these tumultuous emotional turns so effortlessly, where his eminent demeanor never slips out of character.  Despite the predictable narrative arc of falling from grace to living a life in shambles, he carries himself with an immensely appealing dignity throughout, where the scenes with Bérénice Bejo simply sparkle and couldn’t be more scintillating, becoming heartbreakingly tender at times, bringing needed poignancy to their relationship.  Labelled crowd pleasing and lighthearted entertainment by critics, that would be misleading, as this is scrupulously well put together, painting a particularly tragic note to fame, which like youth, is fleeting.  The director combines a rare combination of cleverness and craft, where the extraordinary personalities of the superb talent onscreen win out in the end.  While the relatively unknown director is French, one can’t help but think of fellow countryman Jacques Tati, whose enduring silent comedy was set entirely during the unpredictable modern landscape of the present.  Something of a living, iconic anachronism, he spent everything he earned back into his own unfailingly unique cinematic art, crushed by the lack of success at the box office, probably thinking he was something of a failure at the end of his life, while today he is revered as a rare comic genius.  One might have wished for a special tribute paid to Tati, instead there's a curious debt of thanks to Argentinean soccer superstar Diego Maradona.
Posted by Robert Kennedy at 8:20 PM