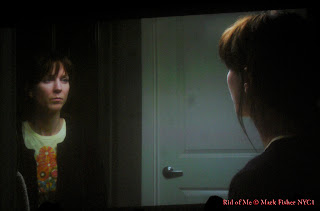 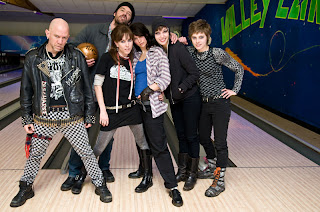 RID OF ME                             B-
USA  (90 mi)  2011  d:  James Westby             Official site
This is like a horrible social experiment gone wrong, as uncomfortable as any horror flick, where low self esteem is taken to new heights in this low key, ultra sarcastic Mumblecore take on the hypocrisy of the complacent and comfortable middle class, where what appears to be a typical marriage turns into a psychotic side show.  Married for less than two years, this seemingly happy couple is forced to admit financial defeat career wise as the husband Mitch (John Keyser) has to return from Southern California back to his home town in Oregon where his old high school friends have a job waiting for him.  His wife Meris (Katie O’Grady) has serious reservations about what to expect as she’s leaving everything behind to seek new grounds.  When a surprise party awaits them at their new home, it’s like an invasion of all the juvenile antics left behind in high school, where Mitch fits right in, one of the missing pieces of the old gang, while Meris is immediately exposed as a fraud and an outsider, as she’s not one of “them.” Despite all the superficial smiles to supposedly make her feel welcome, no one reaches out for her and Mitch ignores her pleas of how terrible it makes her feel to have to socialize with people who despise her.  Mitch is welcomed home in style, happy to be with the friends he left behind, and can’t believe the rush of how good it feels after having to admit personal defeat, but he’s no help whatsoever to Meris who is continually humiliated.  When she finally makes a friend on her own, a couple down the street with a newborn baby, the gang gasps in dismay as the husband is from the Middle East, the subject of an FBI interrogation, where they all suspect he may have terrorist connections with al Qaeda, making derisive racial comments with apparent ease, which horrifies Meris, as no one found their remarks at all ugly and hateful.  Welcome back to high school.
Written, filmed, directed, edited and produced by Westby, shot entirely in Portland, Oregon in twenty days, the director makes no reference to the infamous, similarly entitled PJ Harvey song and little use of the geographic region, such as the mountains, ocean, forests, or streams, as the entire film seems to have been shot on the same few city blocks of the Multnomah Village neighborhood, which in the film is called Laurelwood.  This world hasn’t changed since the days of Eisenhower, throwing lavish attention at themselves as strong, upstanding citizens, while deriding anyone from outside their neighborhood who doesn’t meet their high moral standards.  This sneering communal judgment hits Meris right between the eyes, even after she gives up her Middle Eastern friendship, leaving her totally dependent on her bullying husband, not where you want to be when your self esteem level hits an all time low.  When a dinner party turns disastrous, Meris’s drunken ramblings send the film into catastrophic territory, which all but guarantees viewers will be squirming in their seats.  What follows will leave them spinning their heads in disgust, outraged at the turn of events, as Mitch cruelly ends the marriage to return to his high school sweetheart, whose holier than thou mother is Theresa Russell of all people, who like an attention seeking, leader-of-the-pack, cult parent somewhat fatalistically endorses this return to high school social status, as if this somehow makes everything right in the world, where she’s back in the limelight, literally stealing her daughter’s thunder every chance she gets, overprotecting her special little princess that she squeezes in a vice grip of Barbie perfection.
You’d think the poor girl Meris had had enough and would take the first stage out of town, but instead she obsesses over her missing husband and gets a job in a candy shop where the film finally finds its outsider theme in the form of an outlandishly dissatisfied punk employee Trudy, Orianna Hermann, easily the best thing in the film, who finds that getting wasted is her solution for every problem.  Soon she’s got Meris hanging out with the punk girls whose Fuck the World attitude has her smiling and dancing in the streets, making fun of the straight crowd her husband hangs with, as they behave like overprotected suburbanites who never had to grow up and face reality.  Meris slides back and forth into self loathing, becoming more than a pathetic caricature of a woman who hates to look in the mirror, as she’s literally thrown her entire life away for a group of assholes that couldn’t care less.  But the more time we spend around Trudy, the healthier we feel, despite her persona of negativity and disgust, as she’s simply the most uplifting character in the film—whatever that’s worth.  The film itself can be god awful to watch, showing wretchedly bad taste, and is a bitter pill to swallow with bad indie music swirling around in all directions, but it cynically blasts the complacency of the overbearing middle class that sits around on their asses all day feeling good about themselves, where their brain activity has all but been turned off post high school.  In that respect, the film, through Trudy, rings loud and clear.  Unfortunately, the star of the show is Meris who has to undergo as much nonstop torture and personal humiliation as any von Trier actress, which will likely divide audiences.  Anyone who suggests this movie is crap would not be wrong, but it has a surprisingly ingrained subversive message.  Do not miss the scenes before the opening credits, however, as they set the stage for everything that follows, as this weird, off putting little drama is a scathing indictment of a morally vacuous yet self-satisfied American contentedness.
Posted by Robert Kennedy at 12:16 AM