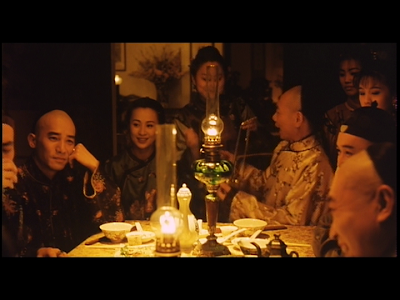 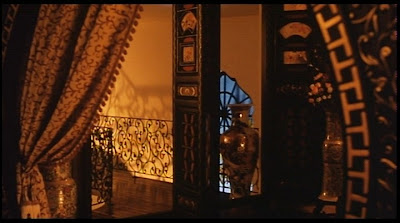 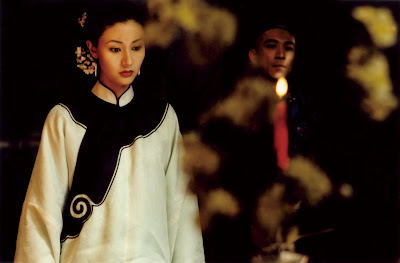 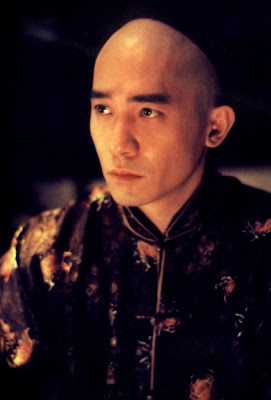 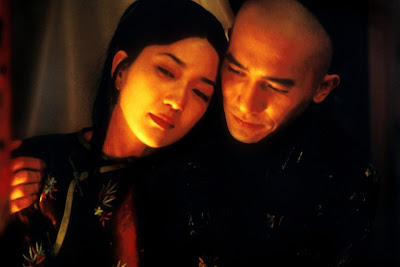 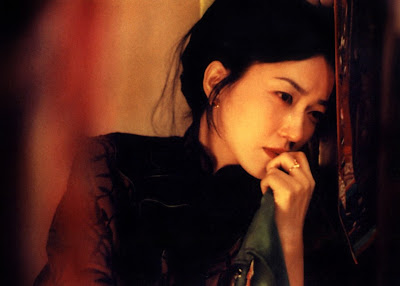 Other than Ingmar Bergman’s distinctively red color design in CRIES AND WHISPERS (1972), no other film seems to match the extreme elegance captured in this exquisitely delicate and beautiful film, adapted from an 1894 Chinese novel by Han Zuyin which initially had hundreds of characters, stripped down to three essential storylines, constructing a deliberately artificial world capturing the rhythms of opium addiction during the late 19th century.  Made for $2.6 millions dollars, nearly $2 million was spent on sets, props, and costumes.  Entirely studio shot by cinematographer Mark Ping Bin Lee, the film is set in an upscale Shanghai brothel, or “flower house,” using long takes (supposedly 39 shots) with little or no camera movement, where time literally stands still, with terrific use of interior lighting that adds a golden hue, as if lit by candlelight or oil lamps, where each shot fades to black, as the next fades in from black.  The film begins with an 8-minute opening shot before the credits, a banquet sequence with drinking and revelry where there is constant chatter, where the women pour wine while standing behind the men sitting at a table playing drinking games, beautifully enveloped in a golden light.  Afterwards, each character is luxuriously dressed in ornate silks, sitting in darkened rooms where layers upon layers of ritual are repeated, as a hot towel is brought to the customer along with some tea, where they are asked if they would please smoke, bringing out an opium pipe, followed by a lit stick, as soup, rice, and dishes of food are placed upon a table.  After sufficient time passes, someone clears away the table, where there is a constantly repeated ritual of meticulous motion, every movement precise.  Rarely does anyone ever raise their voice, as emotions are kept in check, while the smoking of opium is constant, accentuated by the eerie and quietly haunting music by Yoshihiro Hanno that underscores the opium haze, sounding almost like a muted Miles Davis with soft, repeated echoes, providing exotic, barely audible layers of space that waft in the air like drifting smoke.

This is a slow moving film that is literally drenched in its own heavily stylized aesthetic, where it’s not so much the story but how it is told, inducing a dream-like state where it may be hard to distinguish between characters, as the attire, manner and dress is so alike, where the sound of a chosen flower girl may be called out in the background, with names like Pearl, Jasmin, Crimson, Emerald, or Jade, where sex and money are never seen onscreen, instead there is more socializing than sex, with patrons arriving, often escorted by friends, who seem to catch up on the latest gossip, surrounded by the movements of the Madame, housekeepers, and maids, where words are carefully chosen.  Each man is called by his title, where great effort is made to reveal the proper respect in each situation, to maintain an elevated sense of dignity and honor.  The girls themselves are a continuous source of neverending melodrama, with petty squabbles continuously erupting behind the scenes which everyone comments upon until couples are eventually left alone to smoke opium in darkened rooms, a deeply subtle world where emotions are revealed only by barely noticeable changes in the expression of faces.  Initially several girls are introduced with their own segments, including Pearl (Carina Lau), the daughter of the Madame who is given special privileges, acting as a mediator, offering instruction and direction to the younger flower girls, namely Jade (Shuan Fang) and Treasure, almost always seen smoking opium alone where she remains the most independent minded while maintaining her femininity.  Deliberate, cautious, ever graceful, and easily the most intelligent character in the film, she is the eyes and ears of this world, the one they all come to for help sorting out their troubles, where she can always see clearly through the haze, as she has no illusions.  She consorts with the elder Master Hong, a mainstay of the house, where the two can always be relied upon to concoct some master plan.

Another segment introduces us to Crimson, Michiko Hada, who has fallen under the exclusive patronage of Master Yang (Tony Leung) for the past several years, developing a love affair, though when we see her she’s visibly upset, as Master Yang has been spending time with Jasmin (Vicky Wei), which feels like a betrayal.  When they meet, they stare straight ahead, barely acknowledging each other, where even with the intervention of Master Hong, where Yang agrees to pay all her ongoing expenses, he remains unaware how he has dishonored her, as men always feel they have the right to pick whoever they want, irrespective of emotional attachments.  Interestingly, the Taiwanese director insisted upon Shanghai Chinese dialect, but actor Tony Leung didn’t know a single word and nearly quit due to the difficulty in learning the language.  Crimson was initially offered to Maggie Cheung, but her own unfamiliarity with the dialect along with obligations to director Wong Kar-wai prevented her from taking the role.  As Shochiku Studio is the main Japanese backer of the film, they suggested Japanese actress Michiko Hada, who also had no connection to the language, so her lines were dubbed in post production.  A third segment introduces us to Emerald (Michelle Reis), an arrogant and disdainfully proud flower girl who openly speaks of buying her freedom, much to the consternation of the Madame (Rebecca Pan), affectionately known as Auntie.  She explores several offers, literally opening a bidding war, showing the audacity to boldly reject several offers before accepting the patronage of Master Luo (Jack Kuo), a discerning businessman.  Much of what’s happening here is witnessing women fighting for their lives, where they must engage in polite conversations, almost always heard publicly by others, where they attempt to negotiate a better position for themselves in the eyes of their patrons, as they are the sole providers for the girls whose financial success depends upon their popularity.

What’s clear in this film is the depiction of the buying and selling of women as commerce, as a typical business proposition.  The life of a flower girl is brief, usually purchased before the age of 10, then housed, clothed, fed, and trained by the Auntie who invests in their potential, as their moneymaking years will only come during their beautiful youth, perhaps as little as 5 years, where they are totally dependent on their wealthy customers, who often promise what they don’t deliver.  When flower girls are seen exclusively for several years by one benefactor, it’s always with the hope they will pay off their debts, freeing them from any house obligations and marry them, making the rest of their lives comfortable.  Due to the competition, the women continually argue about money and reveal their petty jealousies, often explaining to their customers the reasons for their anger, where their maids may intervene and attempt to help them save face and preserve their honor.  In this manner, despite the surface appearance of opium induced tranquility that prevails throughout, emotions erupt under the surface, disguised with such elegant language, but they flare up, like the striking of a match, before the flames go out, only to be rekindled later.  This expresses the behavior of Master Yang and Crimson, who tears up the place when he sees her with another man, an opera star, deciding the next day to marry Jasmin instead because of Crimson’s alleged betrayal.  In his final face to face meeting with Crimson, both are polite, neither one reveals the turmoil within, as the two sit in silence for several minutes where extraordinary emotions remain hidden under the surface.  Finally, when she pleads with him to understand her innocence, it’s clear they love each other, but to save face he can’t acknowledge it.


Because of the love interest and ultimate tragedy, where Crimson even acknowledges at one point “there is no other option but death,” this storyline overshadows the others, where Master Yang appears in more than half the scenes, more than anyone else.  Yet despite this, he says very little, reminiscent of his mute role in A City of Sadness (Bei qing cheng shi) (1989).  This wordless aspect of the film only enhances the quiet mystery of the intoxicating music that is heard throughout, like the repetition of a silent prayer, where the perfectly decorated opium rooms are a sanctity of harmony and beauty.  Underneath this surface allure, like the flower girls themselves, this business model is about the exploitation of women, as the system only works if the women remain repressed, which preserves this artificially constructed model of capitalism.  While the film is largely a portrait of the all-enduring strength of women, they’re lives are dependent on the financial decisions of men, as only they have the power to buy and sell in the marketplace.  In a capitalist system that caters exclusively to men, men own the world, while women can only learn how to live in it.  There’s no sharing the wealth.  In this Shanghai world, men are just a den of thieves, an illicit gang of controlling interests, no different really than the controlling political and financial interests in Taiwan and China today.  Even in the United States, according to the Fortune 500 richest companies, less than 3% of the most successful companies have women sitting in positions of power.  Yet the illusion is capitalism adheres to the principles of open market reforms.  This is hardly reform, as men still preserve their controlling interests in the institutions of money and power.  The opium metaphor has multiple reference points, not the least of which is historical, but in this film one of the determining factors used throughout is deception.  Ironically, Master Yang’s new wife betrays him as well, where the final shot of the film oddly resembles the final shot of Altman’s McCabe & Mrs. Miller (1971), with Crimson back together with Master Yang, both under the influence of opium, where her once promising hopes of love have evaporated, expressed in a near still portrait where they sit alone in a darkened room, neither speaking, both smoking the opium, where nothing is left but the opium.
Posted by Robert Kennedy at 1:33 AM