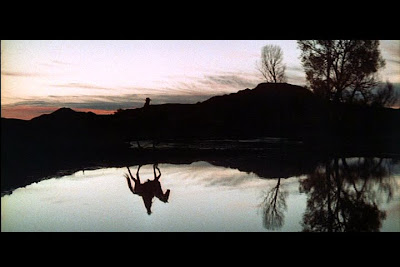 There are various cuts of this film, the original at 106 minutes which was drastically cut by the studios, a 1988 restored version which adds 15 minutes, and a 2005 Special Edition DVD that cuts half of the added minutes.  By all accounts, the 1988 restored version is the way to go, but a recent theater screening turned out to be the 115 minute Special Edition version which cuts some actors out of the movie completely, edits out certain lines as well while re-structuring various scenes.  Peckinpah’s last western feels like a somber death march, a mournful, poetic elegy to an end of an era where the values that men stood by were slowly disappearing along with their freedoms, replaced by the will of a few rich and powerful men who ruled the territory, monetarily and politically, putting an entirely new restricted face of commerce on what used to be wide open spaces and the land of the free.  The applicable metaphor, which is mentioned in the film, is their utter disgust at men who would fence in the West, in this case, cattle barons.  Set in New Mexico in 1881, James Coburn, in what is easily the performance of his career, chucks that career-defining hustler’s grin for a solemn frown as Pat Garrett, a world weary former gunslinger turned lawman, a man who rode with Billy the Kid in some capacity in their past, who opens the film riding into town visiting the Kid, a very young and clean shaven Kris Kristofferson, warning him to get out of the territory, as in 5 days he’ll become a lawman sworn to get rid of him, cleaning up the state, making it safer for bankers and cattle owners and prospective business ventures.  Even earlier, before the opening credits, there is a Black and White sequence of Garrett himself getting gunned down, an event that happens some 30 years into the future, certainly a foreshadowing of ominous things to come, and an interesting use of differing time periods where the death of both are mysteriously but inevitably linked together.

The first 45 minutes of the film are simply extraordinary, featuring the music by Bob Dylan, whose name is credited above the title of the film and who also appears in a small role, where the mixture of sepia and Black and White from the opening set the tone for some astonishing use of ‘Scope by cinematographer John Coquillon, capturing the essential brightness of the empty desert landscape in early morning, but also the extreme light at dusk, where one of the more brilliant shots is seeing a rider on a horse on the far shore of a river get buried in the dark shadows, but a clear and vivid silhouetted reflection can be seen in the water as he rides across the entire length of the screen.  Two of the opening set pieces are riveting, among the best in the film, the taking of Billy alive and his subsequent jailhouse break out, which is unlike anything seen before or since.  After his memorable escape, someone brings him a horse which immediately throws him, an unusual commentary since it happens in front of a gawking crowd on Main Street right in front of the hangman’s execution site they are constructing.  From that point on, Garrett is on a mission to appoint involuntary deputies to help go after him, avoiding until the end the one place he’s most likely to be, instead visiting a litany of ornery characters throughout the vast territory who are never introduced but seem to have a history together, whose faces are synonymous with westerns, who simply appear out of thin air, where virtually every sequence is built around inevitable killings, compiling a high body count by the end, even for Peckinpah.  These secondary characters are essential, however, as they provide the emotional heft of the film, starting out with Slim Pickens and his rifle toting wife Katy Jurado, carrying bullets in her breast, both of whom appeared in Marlon Brando’s ONE-EYED JACKS (1961) a decade earlier, who silently express with their eyes everything we need to know about the murderous and endlessly bleak landscape.

As Garrett wanders through the vast expanse of the territory, it’s obvious he’s not in any hurry, that he’s simply setting the tone for his mission by announcing his intentions across the state.  The Kid as well shows no sign of panic or alarm, as the film loses much of its initial vigor and sense of expectation and instead seems to meander slowly to its inevitable conclusion.  Unlike Brando’s film, based on the same Pat Garrett & Billy the Kid source material, The Authentic Death of Hendry Jones by Charles Neider, who inverts the story making the Kid the killer, another infurioratingly downbeat western where a maniacal lawman (Karl Malden) seeks public glorification by building a reputation of killing or humiliating a notorious outlaw (Brando), similar to Gene Hackman’s Sheriff “Little Bill” in Clint Eastwood’s UNFORGIVEN (1992), sadistic lawmen who will resort to murder as a way of enforcing the law, Garrett seeks no public affirmation and asks for no special compensation, and is instead driven by a complex code of honor that is already outdated, like the end of the samurai era, and he wearily knows it, where the routine of killing has become a rotten job doing the bidding of others who are more ruthless and brutally despicable than the so-called outlaw.  While there may have been a motivation at the outset, as the Kid broke out of his jail and he sought revenge, but by the end, after the passage of time, all that is surprisingly meaningless, as what he’s asked to do is kill a friend, man to man, someone he respects perhaps above all others, especially those who are paying him to do it.  This hint of anguish and regret affects every move he makes as he eventually closes in, actually waiting patiently outside the Kid’s window as Kristofferson is making love to his eventual wife Rita Coolidge, another sign of obvious affection and respect.  But this is a story of a destroyed friendship, one who remains a free spirit until the end and another who is encumbered by age, duty, and responsibilities, who disappointingly accepts compromise and domesticity, all of which adds to an alcoholic portrait of bitterness and scorn, contemptuous of the vile men he works for and the short-sighted interests of lawmen who seek the same aim, thinking a kill may somehow bring them glory.  For Garrett, fulfilling his duty leaves a pathetic emptiness, dulling any hopes that the future offers any glimpse of righteousness or respectability.
Posted by Robert Kennedy at 5:09 PM