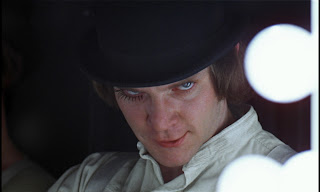 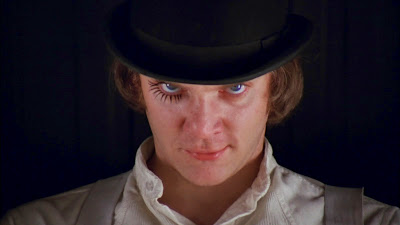 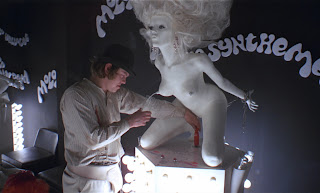 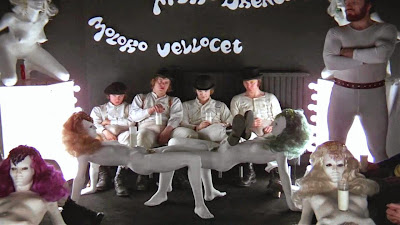 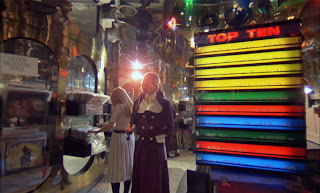 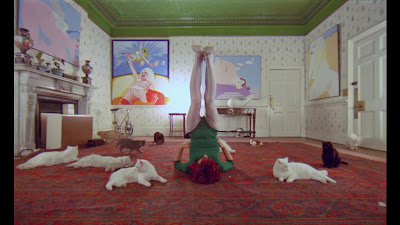 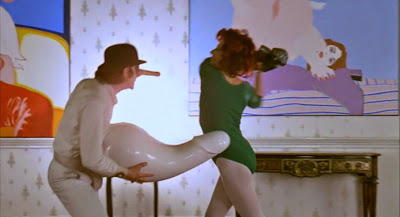 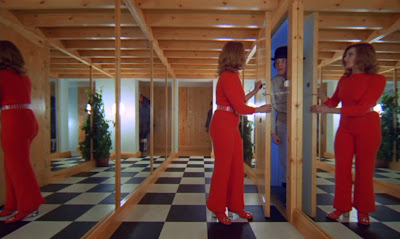 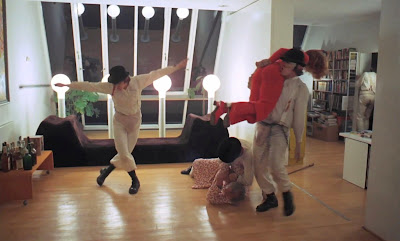 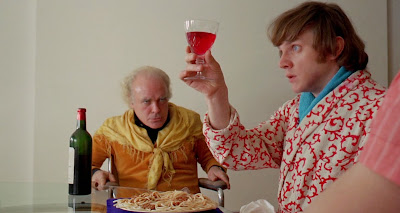 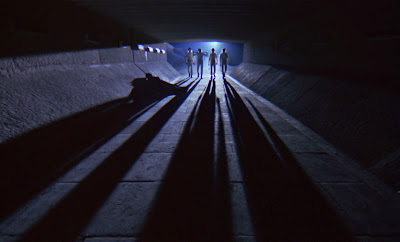 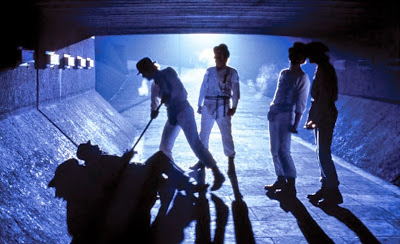 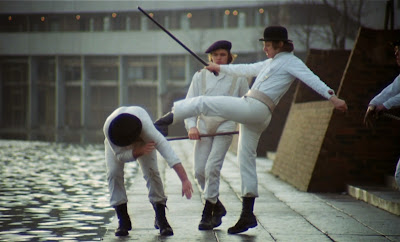 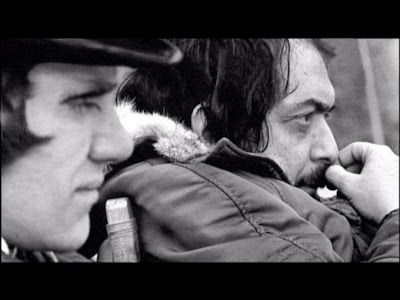 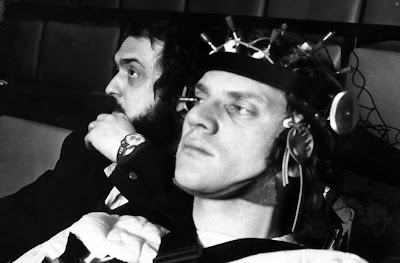 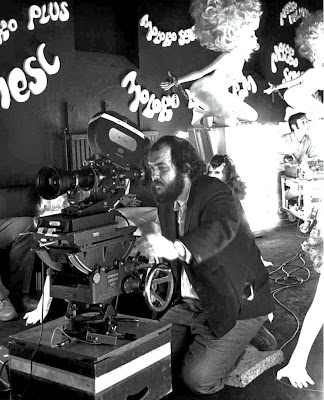 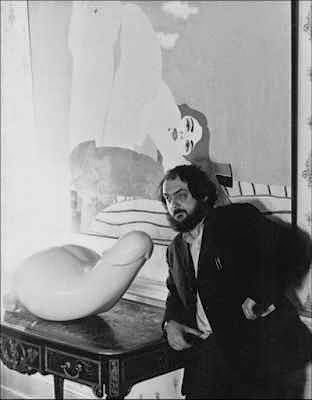 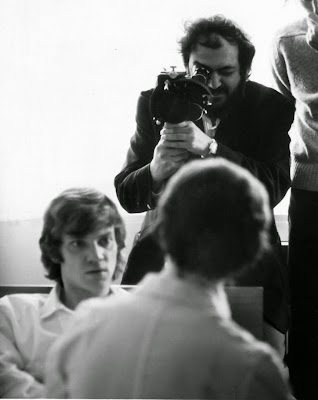 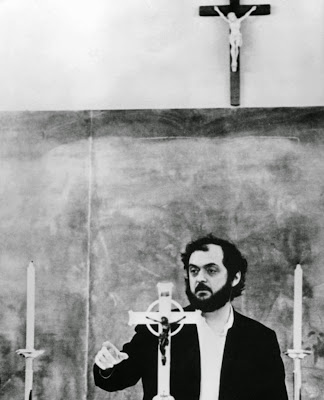 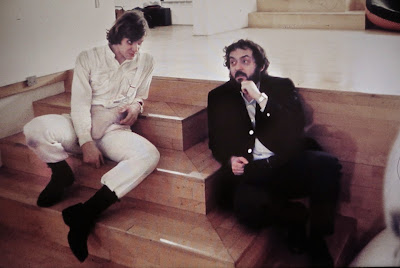 
A bold and daring film coming on the heels of two other ultra violent films, Ken Russell’s THE DEVILS (1971) and Sam Peckinpah’s STRAW DOGS (1971), where knowledge of the disturbing aspects of the film literally preceded its release, this is a highly stylized, subversive adaptation of the Anthony Burgess novel, which was originally written as a response to the horrific rape of the author’s wife, actually inventing a slang vocabulary to reflect its own youth subculture.  Kubrick changes the tone, perhaps coming closest to DR. STRANGELOVE (1964), as the biting sarcasm is matched by extreme aggression and exaggeration, where there’s nothing subtle about this film which for all practical purposes is one continual kick in the balls, an adrenaline rush of satiric overkill, and a powerful condemnation of British culture in the 60’s and 70’s.  Forever remembered as the Kubrick film to come *after* 2001: A Space Odyssey (1968), the film is known for its graphic depiction of youth violence, where some initially felt it was an incitement to commit violence, copying some of the graphic scenes in real life, such as a “Singin’ in the Rain” rape, where Kubrick himself received death threats, so the movie was quietly pulled from distribution only in Great Britain shortly after its release, never to play again for the next 30 years until after Kubrick’s death.  This was done by Kubrick himself due to the lacerating criticism the film received in Britain attributing the rise in street crime to the violent subject matter shown on movie screens.  Apparently film critics never attended a British soccer match, where you’d think soccer itself was responsible for hooliganism, where often drunken fans resort to profane shouts and fisticuffs afterwards, but also full-blown riots breaking storefront windows using bottles and baseball bats.  Nonetheless, the game of soccer continues.  Juvenile delinquency is not something learned in movie theaters, or political apathy, or a wretched disrespect for others.  These are more commonly found in homes where the economic futures are grim, leading to a lashing out by disillusioned youth who refuse to accept the hopeless conditions of continually being at the bottom, taking the future by any means possible, literally grabbing and stealing it, perhaps the only way they see they can alter the course of their otherwise meaningless lives which are all but invisible in the eyes of the government.


While 2001: A Space Odyssey combines the elegance of classical music with an equally mind-blowing visual scheme, enhancing the boundaries of what is already a thought-provoking story, A CLOCKWORK ORANGE is a terrifying morality play, a futuristic horror film that contrasts the *ultra violence* inflicted by roving gangs of amoral and disaffected youth with the unspeakable acts inflicted by government, the supposed moral voice of authority, upon those responsible, where the scientific treatment literally neutering them of their aggression is more vile and horrific than the crime.  It’s a portrait of an out of control, overcontrolling government that treats behavior disorders as a mental condition, leading to a highly experimental brainwashing technique, reminiscent of lobotomy treatments designed to cut out of the brain what was thought to be causing anti-social or self-destructive behavior, leading to a programmed, dehumanized individual where weakness prevails and the concept of choice and free will are all but eliminated, described as a soulless creature by the prison chaplain.  Using an outrageously futuristic production design throughout matched by the most exaggerated use of sarcasm that literally drips off every narrated word from the despicable lead character, Alex DeLarge (Alexander the Large in the novel), one of the groundbreaking bad boy roles of the remarkable Malcolm McDowell, who had just completed Lindsay Anderson’s movie IF….(1968), playing the charming leader of a group of goons and thugs that he calls his droogs, listed by the American Film Institute as the 12th greatest film villain, who just for the thrill and excitement of it rob and beat the crap out of people with a sadistic relish, cherishing every moment of it while Alex, with a cane and bowler hat, pulverizes his victims to the lighthearted song and dance of “Singin’ in the Rain.” A Clockwork Orange - Singin' in the Rain - YouTube (3:04).  The joy and excitement they get inflicting insurmountable pain and cruelty makes little sense, much like Michael Haneke’s subsequent depiction in Funny Games (1997), yet nihilistic rebellion seems to be the one thing they’re capable of, as otherwise they’re uneducated dropouts and complete misfits, all except Alex, that is, who is the smartest one in the room, who loves disseminating random violence and listening to the music of Beethoven’s 9th Symphony, familiarly calling him Ludwig Van, as if he’s an old friend.  Painfully, reflecting a breakdown of law and order, we watch Alex and his droogs cruelly beat up drunks and old men, take on rival gangs, or break into people’s homes, making what they call “surprise visits,” expressed through a kind of abstract visual choreography, where they brutally attack the men and viciously rape women in their own homes, displaying a kind of amoral mob mentality with a boyish schoolyard enthusiasm.


Radical and extreme, Alex’s anarchistic contempt for society reflects a reaction to his own working class background, where strikes and wage cuts express a poverty of spirit that rules the day, where his utter disdain of others is interestingly a conditioned response to his own social environment.  But Alex gets too big for his britches, as they say, and after taking enough humiliating bullying, his own droogs turn on him, leaving him immobilized as the police arrive, where he’s made an example of by the harsh law and order government, his face plastered all over the newspapers, his notorious deeds published for all to see, making him something of a super criminal.  Once in prison, however, he’s just another piece of meat like everybody else.  But when the Minister of Interior arrives inside the prison looking for a candidate to convince the public that science can completely eliminate violent tendencies once and for all, offering a get out of jail free incentive, Alex is the perfect candidate, where his example could bring unprecedented popularity to the government, showing they are serious about getting tough on crime.  Anyone who’s seen Nicolas Roeg’s The Man Who Fell to Earth (1976) or Brian De Palma’s The Fury (1978) has some idea how science is depicted in the 70’s, a disaster in the making much like the way the Atom bomb was depicted in the 60’s, but it is Kubrick’s futuristic depiction of such a deplorable, corrective deprogramming therapy that sets the tone, where human beings are guinea pigs who fall under the malicious totalitarian control of the state, performing some of the most detestable and grotesque tests imaginable, showing little regard for the patient’s well being, all in the name of science, and of course, good government.  While there is a tendency of several characters, usually authority figures, to sadistically over act, much like Peter Sellers in DR. STRANGELOVE, making them seem more heinous than they really are, the magical elixir cure is relatively quick, taking only two weeks, using a horrific Pavlovian conditioning treatment in reverse, where he grows ill at the thought of sex or violence, and, ironically, Beethoven’s 9th which is playing in the background of one of his deprogramming films, leaving him helpless and defenseless to even the slightest physical altercation, pathetically groveling on his knees in submission to anyone who might threaten him.


Alex’s nonchalant ascent to his signature smug arrogance as a top dog crime thug is memorable, but his pathetic descent into a cured but weak-kneed, ordinary citizen is even more mind-bogglingly surreal, especially considering his picture appears in all the newspapers as a *success* story, but the man is a portrait of utter humiliation, forced to endure a Hellish existence of internal anguish and despair.  The path Alex takes is his alone, where he perhaps outdoes the sight of Charles Foster Kane in finally getting his comeuppance, as Alex’s comes while he’s still young and in the prime of his life.  After his treatment, however, everyone he knows still sees him as the “old Alex,” continuing to harbor grudges against the evil acts of his past deeds, where they’re inclined to believe this so-called cure is all a hoax and that Alex is just pretending.  Loath to give him any thought of mercy or forgiveness, payback is a bitch, as everyone is quick to heap onto him their long suppressed anger and hatred in revengefully getting back at him, taking some form of sadistic delight in piling onto his endless misery.  The acute nature of his fall from grace actually foreshadows Kubrick’s next film, BARRY LYNDON (1975), a film in two acts, meticulously detailing the rise and fall of a nobleman, where the 2nd act is entitled Containing an Account of the Misfortunes and Disasters Which Befell Barry Lyndon.  Kubrick’s apocalyptic endings have become renowned, as are his mathematically precise opening title sequences, where this one has no listed credits, but is set to a slowed down synthesizer version of Henry Purcell’s “Music for the Funeral of Queen Mary”  A Clockwork Orange - Intro [HD] - YouTube (2:17).  Kubrick was another lover of irony, where the sneering tone of the narration leads to production design overkill with futuristic phallic art, near surreal sex and violence, not to mention heavily stylized imagery replacing actual violence.  But it’s Kubrick’s daring visual design, his iconic imagery matched by his equally stellar choices of music that make this film what it is, as the mocking tone adds much needed levity throughout, as evidenced by a touch of Beethoven’s 9th Symphony A Clockwork Orange - 'Dance' - YouTube (1:32), or this choice sequence set to Rossini’s “The Thieving Magpie”  A Clockwork Orange: Alex puts his Droogs in place ... YouTube (1:40), where the way it’s filmed, often using a wide-angled lens, actually distorts reality, while also creating a slow motion, almost dream-like state which adds a more detached, outsiderist view, which alongside the music keeps the viewer at a distance, as if we’re outside looking in, which minimizes the impact of much of the violence.  While the original release was rated “X” for the graphic depiction of sex and violence, it has since been re-rated to an “R” film.  Of note, in the book Alex grows up, and through his own free will makes the choice in the end to give up his adolescent views of violence, an aspect Kubrick intentionally leaves out of the film, something Burgess never forgave him for, as that was the point of writing the book.  Kubrick, however, enlarges the canvas, painting a scathing satire implicating government in the corruption and moral hypocrisy of the era.
Posted by Robert Kennedy at 12:05 AM