The Mother and the Whore (La Maman et la Putain) 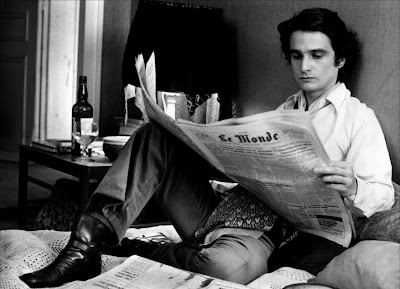 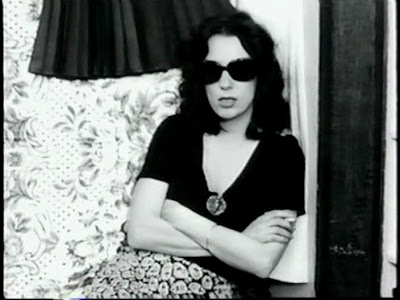 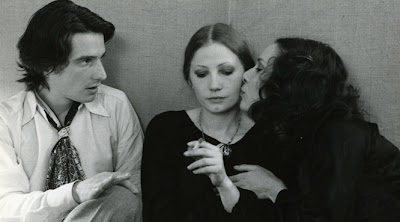 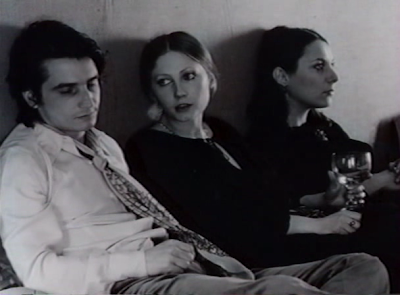 THE MOTHER AND THE WHORE, one of my all time favorite films, without which I never would have learned to appreciate the unique genius of John Cassavetes.  Eustache, like Cassavetes, created a completely improvisational drama while carefully scripting each and every word.  One of the mysteries of motion cinema is simply allowing the camera to capture the essence of human emotion, its best and its worst, in this case raw and unedited, filling the screen with imperfect people allowed to reveal their imperfections in full bloom.  Mistakes are made.  Attention must be paid.  People must learn to tend to the business of being people.  And it is films like this that help us do so. This is not a happy film, as it comically slithers and slides through infantile silliness and pretension before plunging us though the depths of self-pity and despair.  I always thought of this as a film about adolescence, the end of a youthful innocence.  Leave it to film critic Jonathan Rosenbaum to find a political message attached to that.

Eustache carefully uses the length of the film to disassemble the persona of these blighted lovers, using confessional dialogue that exposes their raw internal distress and desperation that in this drama becomes an emotional marathon.  Though it has the appearance of improvisation, the entire dialogue came from the director's own life and was scripted entirely from conversations Eustache had or had heard, and Françoise Lebrun, who had never acted in a film before, reenacts, as Veronika, a part she played in life as Eustache's lover.  Filmed on 16 mm high contrast black and white, the force of the film is its focus on the subjects, entirely without pretense, rigorously observant, terribly funny, deeply sad, the film is a searing confessional masterpiece that unfurls in exhausting, exhilarating detail, a beautiful gut-wrenching choreography of fallible human beings, the force of which is its elegant simplicity.  According to the director, "I wrote this script because I loved a woman who left me. I wanted her to act in a film I had written. I never had the occasion, during the years that we spent together, to have her act in my films, because at that time I didn't make fiction films and it didn't even occur to me that she could act. I wrote this film for her and for Léaud; if they refused to play in it, I wouldn't have written it."  The film is dedicated to the real-life person for whom the part of Marie was written, who wound up killing herself, as did Eustache in 1981 at the age of 42.

Paraphrasing a wonderfully written review Roger Ebert, Chicago Sun-Times, Ebert at his best in 1999, where his words cry out to be used and repeated here, the film stars Jean-Pierre Léaud, whose best film performance was his first, Truffaut’s 1959 film THE 400 BLOWS, playing a fierce young 13-year old roaming the streets of Paris, idolizing Balzac, and escaping into books and trouble as a way of dealing with his parent’s unhappy marriage.  His adult performances have all been an extension of that character, grown up.  Here he plays Alexandre, who smokes and talks incessantly about himself in the cafés of Paris, Les Deux Magots and La Coupole, literally performing his life theatrically for women, wearing a dark coat with a long scarf around his neck sweeping to his knees.  His best friend dresses the same way.  He spends his days in cafés, holding, but not reading, Proust.  “Look, there’s Sartre – the drunk,” he says one day in Café Flore, Eustache supplies a quick shot of several people at a table, one of whom may or may not be Sartre.  Alexandre talks about Sartre staggering out after his long intellectual chats in the café and speculates that the great man’s philosophy may just be alcoholic musings.

Alexandre lives with Marie, Bernadette Lafont, who earlier starred in Truffaut’s film short THE MISCHIEF MAKERS (1958), also Chabrol’s BEAU SERGE (1958) and LES BONNES FEMMES (1960), playing a beautiful boutique owner who supports him.  He’s just broken up with Gilberte, Isabelle Weingarten, who was introduced in the Robert Bresson film Four Nights of a Dreamer (Quatre nuits d'un rêveur... (1972), who rejected his proposal of marriage, and his way of dealing with this despair is to date the first woman he sees that looks like her, Veronika, Francoise Lebrun, a nurse from Poland, subjecting her to a great many of his thoughts and would be thoughts.  Much of her initial screen time consists of closeups of her listening to one of Alexandre’s endless monologues, his eyes always following the progress of other women in view.  One of the wonders of the film is the way women can let a man like Alexandre talk endlessly about himself while they regard him like a specimen of aberrant behavior.  Women keep a man like Alexandre around out of curiosity about what new idiocy he will next exhibit.  Of course, Alexandre is cheating on both women, but his style is to play with relationships, even bringing both to bed at the same time just to find out where it will all lead.  In this case, it leads to the emotional devastation of both women.  While Marie mostly weeps in silence or plays her favorite records, Veronika is frank about herself, sleeping around because she likes sex, as it takes her out of her low self-esteem.  She has a passionate monologue near the end of the film, a torrent of self-pity describing her sexual needs and her resentment that women aren’t supposed to admit their feelings, describing the miseries of loveless sex, confessing in front of Alexandre and Marie that she loves him and she loves having sex with him, so why should she be shamed of that?  It is the lower class, working girl Veronika who throws the pretense of people like Alexandre and Marie to the wind, literally exposing the middle class as one big lie, a blown up dream, “The Working Class Goes to Paradise,” people who have the economic good fortune to be able to comfortably hide behind their world of illusions and deceptions without having to pay the price that others unfortunately must pay for their mistakes.  Alexandre accompanies her back to her room, where she rejects him in disgust, explaining she may be pregnant with his child.  He leaves, but then runs back and proposes marriage which she accepts while vomiting into a wash basin, and Alexandre collapses on the floor against the refrigerator, shivering in agony.

A friend Barry Goetsch made an interesting observation about the title.  By all accounts, Veronika is considered the whore, as she willingly calls herself one, but by the end of the film when we learn she is the mother carrying Alexandre’s child, we discover it is Alexandre who is the whore.  The difference of each gender in approaching sex is the theme that runs throughout the film.  Men can have sex with anyone with no complications, even marriage can be proposed frivolously, as Alexandre does twice in this film, in the beginning and at the end.  Only women can bear children, which carries an enormous commitment that men simply cannot overlook, always and forever, ironically, a phrase men use to express their commitment of love to women.

Critic Jonathan Rosenbaum says this is the film that slammed the door on the French New Wave and is one of the strongest statements about the aftermath of the failed French revolution of May 1968, literally a definitive expression of the closing in of Western culture after the end of an era of hope and optimism about a changing future known as the 60’s.  Innocence lost?  He suggests the director’s suicide confirms the film’s painting such a bleak portrait, a terminal collapse of will and hope, that it accurately describes “not just where we are today but of who we are,” that Alexandre’s expression of hopelessness about social change and human possibilities is in fact an expression of defeat, and accurately reflects the defeatist times we’re currently living through.  Some of Alexandre’s expressions:  “To speak the words of others, that’s what freedom must be,” or “My only dignity is my cowardice,” or “Nausea is a noble sentiment.  The world will be saved by children, soldiers, and madmen,” to which Veronika replies, “I don’t know if you make them up or not, but you say some very beautiful things.  In a bad film it’d be called the message.”

Eustache links the dreams of May 1968 to the memories of the Nazi occupation.  Alexandre’s unnamed friend has a fetish for Nazi paraphernalia and carries a book entitled SS and the Gestapo – The Reign of Terror, also plays a record of Zarah Leander songs Zarah Leander: Ich weiß, es wird einmal ein Wunder gescheh'n ... YouTube (3:36), which prompts Alexandre to lament being born after the time when girls swooned over soldiers in uniforms, that now “business has replaced the uniform, young professionals in sports cars.”  One of the climactic shots focuses on a bereft Marie drowning her sorrows by repeatedly listening to a 1948 recording of Edith Piaf singing “Les Amants de Paris” YouTube - La maman et la putain YouTube (3:05).  Eustache’s choice of actors cannot be separated from their link to the New Wave and its aftermath.  When Alexandre reproaches Gilberte for forgetting their love and resigning herself to “mediocrity,” he says, “After crises one must forget everything quickly.  Erase everything, like France after the occupation, like France after May 1968.  You recover like France after May ’68,” later recalling a time, “There was the Cultural revolution, May ’68, the Rolling Stones, long hair, the Black Panthers, the Palestinians, the underground.  And for the last two or three years, nothing anymore.”  And still later, he describes with envy, “In May ’68 I went to a café, everyone was crying.  It was beautiful.  A tear-gas bomb had exploded, a crack in reality opened up.  I’m afraid it will all be gone.”
Posted by Robert Kennedy at 9:03 AM