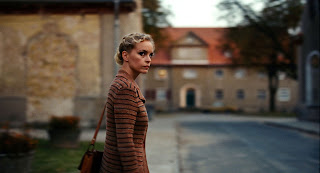 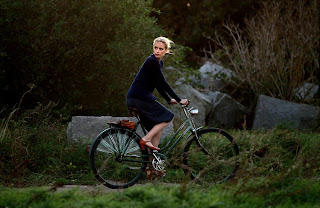 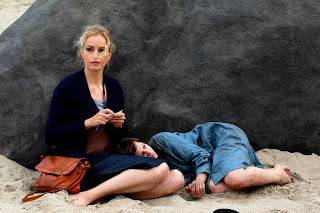 No other movie about East Germany in the past 20 years (including the Oscar-winning “The Lives of Others”) has touched me, a former East German, as much as this one. It vividly brought back memories and emotions I had long forgotten. Everything is just so in this film, nothing exaggerated or glorified. In a convincing unhurried way, Mr Petzold has caught the spirit and atmosphere of the time. Each gesture, each tableau, from the hospital equipment and apartment furnishings to the smallest accessory, such as a folkloristic Bulgarian ashtray (something no East German household could be without) is rendered just right. Spiritually, too, the film airs the values that many East Germans feel have got lost in the more opulent, materialist world of a unified Germany. It is a fine homage to ordinary people living in extraordinary times.

—excerpt from The Economist, May 10, 2012,  New film: "Barbara": Ordinary people at extraordinary times

Winner of the Silver Bear award for Best Director at Berlin 2012, Petzold has created perhaps his most conventional film, though initially resorting to the most uncompromising means, turning vaguely compromising only at the end, which feels somewhat disappointing.  Within this über repressive East German society on the edge of the Baltic Sea in 1980, the film stays completely under the surface for nearly the entire film, where feelings are a liability that can only get you into trouble, where everyone is under suspicion, often visited and scrutinized by the Stasi secret police, which means apartments searched and citizens subject to a thoroughly humiliating body cavity inspection, so the entire society exists as a kind of ghost world.  As seen through the eyes of a single character who is in nearly every frame of the film, Nina Hoss as the title character plays a disgraced citizen recently released from interrogation, where her crime was apparently requesting an exit visa, exiled to a small rural village where a somewhat dilapidated apartment has been assigned to her, also a job working as a physician at a local hospital, where everyone has been prepped by the Stasi for her arrival, particularly her boss André (Ronald Zehrfeld), the lead physician.  Barbara plays her role with such a subdued nature, her eyes downturned, never showing any sign of interest, completely guarded as if every living soul is spying on her.  Every neighbor and coworker has ulterior motives, as is every car parked outside, or every ring of the doorbell becomes a continuing sign of oppression, as it’s never a welcome visitor.  In terms of a character study, it’s reminiscent of Andrei Zvyagintsev’s Elena (2011), the subjugation of an older woman living in Moscow that feels equally suffocating, though in that film it’s all about the capitalist power of economics.  Still existing in the socialist era, neighbors spy on neighbors, where even your own lover could fall under suspicion, but there is no wealth whatsoever on display, instead children are sent to forced labor camps.

This is another minimalist film told with a certain rhythm and precision, with little information obtained through dialogue, as all normal channels of communication are blocked, buried beneath the surface, so instead it’s a film about body language, brief glances, furtive looks, inquisitive eyes, or stares, where Barbara is continually viewed as someone that has something to hide.  By following her routines even as no one is watching her, she does seem to have a secret life, riding her bike much of the time, often veering into the deep of the woods, obviously trying to avoid detection.  Often she is punished by the police simply for avoiding their watchful eyes when they cannot account for her actions.  While it feels like she is literally being run into the ground by incessant hounding, she never seems to have a moment of peace.  But in this society, that’s ordinary and what’s to be expected.  What’s unusual is for someone to care as much as Barbara does about the idea of freedom, where she’s already tasted it, lived it apparently, as she’s cultured and refined, one of the few doctors that actually listens to her patients, and away from the microscopic lens of the Stasi, she actually exhibits kindness to her patients, reading regularly to one of her young female adolescents, a story about riding down the Mississippi River on a raft from Huckleberry Finn, enjoying the air of being free, out from under the reach of an abusive father that cages and beats his own son.  The symbolism for freedom is not lost on the audience.  While the picture of life behind the Iron Curtain is one of mental captivity, where the State is always trying to capture and possess what’s in your mind, citizens find ways to elude the police, to tell them little or nothing, which is another way of not telling them anything at all.  While Barbara doesn’t exactly fit in, where all around her, everyone views her as a political subversive, André is continually supportive and helpful, attempting to make her life a little less miserable, which only makes her more suspicious of his motives.

Petzold exudes formal restraint, exercising a Kieslowski Eastern European style cinema of moral anxiety, never allowing emotions to rise to the surface, showing a bleak world where life isn’t lived so much as barely tolerated, where nobody likes living under a police state, but most get used to the inevitability that people close to them are informers, as the Stasi claimed nearly a quarter of a million informers, most all of them ordinary citizens.  When Barbara ventures outdoors on her bike, it’s a sunless world draped in layers of grey, where the wind is always howling and it feels like storms are continually approaching.  Nature itself feels untamed and hostile as humans attempt to navigate their way through the dark.  Few clues are offered here, as it’s a barebones story with little to go on, where much of it is following the doctors as they make their rounds through the hospital, yet throughout, one feels like Barbara is resisting this everpresent weight on her back simply by not joining in, by adamantly refusing to go along with this repressive regime.  In a moment when she lets her guard down, she admits, “It's impossible to be happy here.”  Unlike THE LIVES OF OTHERS (2006), winner of the Best Foreign Language Film that told a similar story from the point of view of a conflicted Stasi officer, this reveals the everyday rhythms of the same subjugated society through the life of an ordinary citizen.  While the film gets many of the details right and dramatically reflects a downbeat and subservient society, it doesn’t expose the behind-the-scenes operations of the Stasi that THE LIVES OF OTHERS reveals or the profoundly effective interrogation techniques used to browbeat information out of people.  Instead BARBARA creates an atmospheric recreation of a toxic cloud hanging over East Germany, a time when people were choking on the fumes of a failed political regime that resorted to terrorizing their own citizens.  The more restricted people are from obtaining freedom, the more significant it ultimately becomes in their lives.  While Barbara seems frenetically driven to escape rather than remain a rat in a cage, some may find her end game baffling, as her outlook changes from dire, life and death circumstances where she’s literally gasping on her last breath from each insufferable moment to something else altogether, something unique in the human spirit.
Posted by Robert Kennedy at 8:53 AM